Goodbye Bill, Chasing the Heron, Reunion with an Elmwood Friend

Wednesday, Aug. 16th we woke up to the sound of the phone alarm. I squinted to see the clock on the dresser and made out the time to be 5:15 am. Bill began his routine and was quickly finished loading the car. After a warm hug and a kiss goodbye he pulled out at 6. He disappeared into the morning fog which didn’t dissipate until the sun pushed it off around 8.

Clem and I stayed snuggled in bed until 7. I didn’t think I had dropped off in between but after checking my Fitbit sleep records discovered that I had fallen into a light sleep for 45 minutes. That is good that I am able to do that rather than tossing and turning so early.
I wasn’t sitting at my laptop with my tea for long when I noticed the dark coloured heron fly by from my view to the east, right across the north to a pond at the front. I switched out my lenses, slipped a jacket over top of my jammys and walked ‘sneakily’ down the lane looking for him. 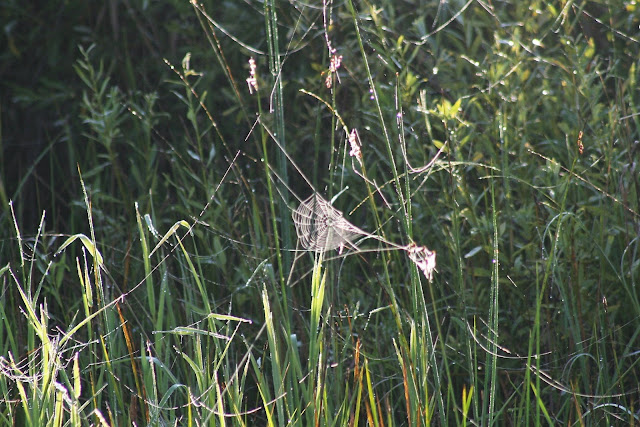 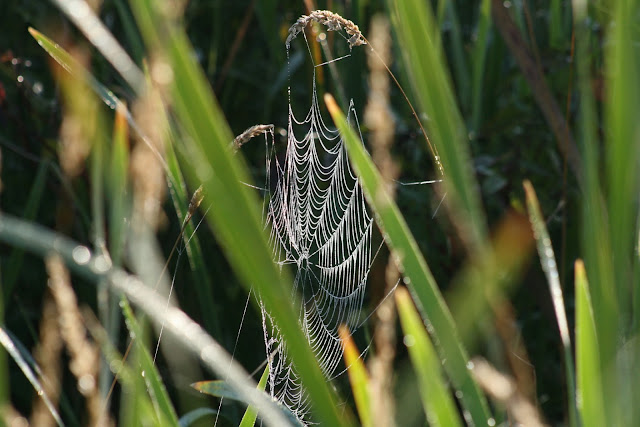 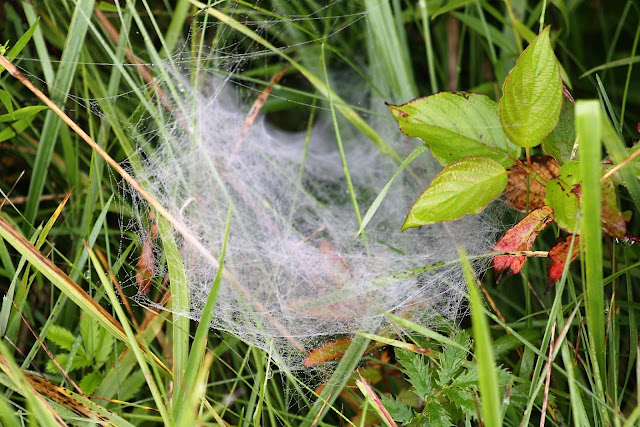 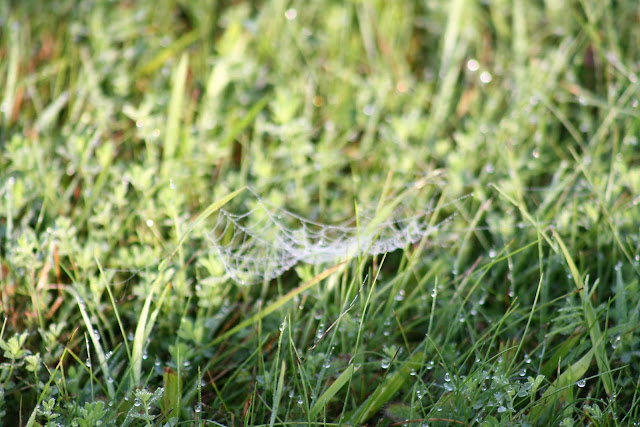 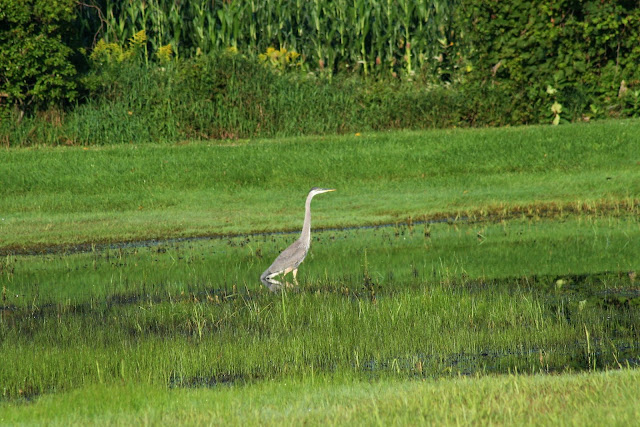 There he was in our neighbours rain-made pond. He started walking to a better vantage point (for me) and I settled myself up against the cedar rail fence for stability. I was probably standing about 100’ away so my zoom ins are not perfectly focused but I was enthralled. Probably the bad focus was my own slight movement, I should have carted my tripod down with me. 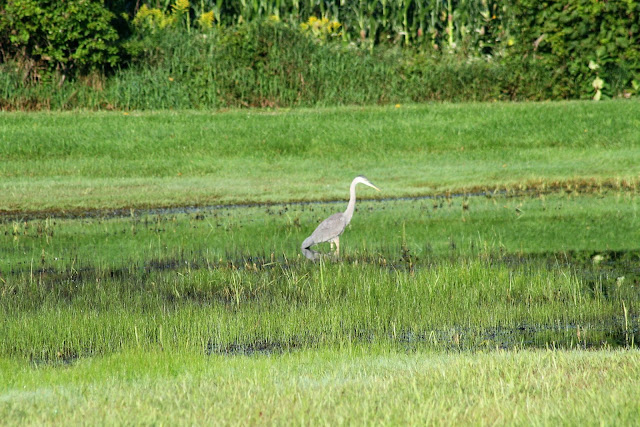 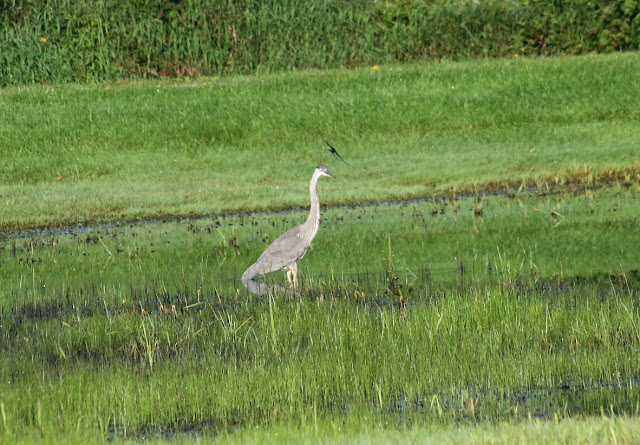 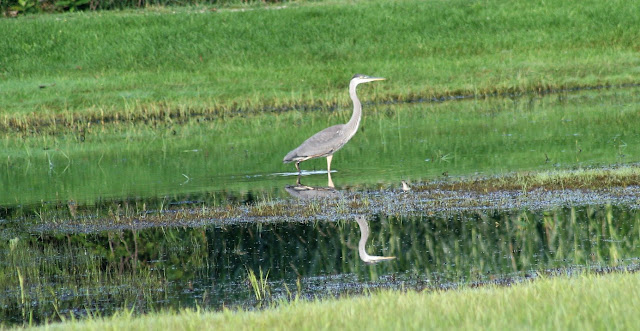 Okay, after 20 minutes of waiting I was anxious for him to fly for more captures on my Canon. After 30 minutes, I was praying for a neighbor to drive by on their way to work. Man, these herons have more staying power than I have patience. Finally, I heard a car coming and readied myself for the flight. Yes! Great way to start the day. 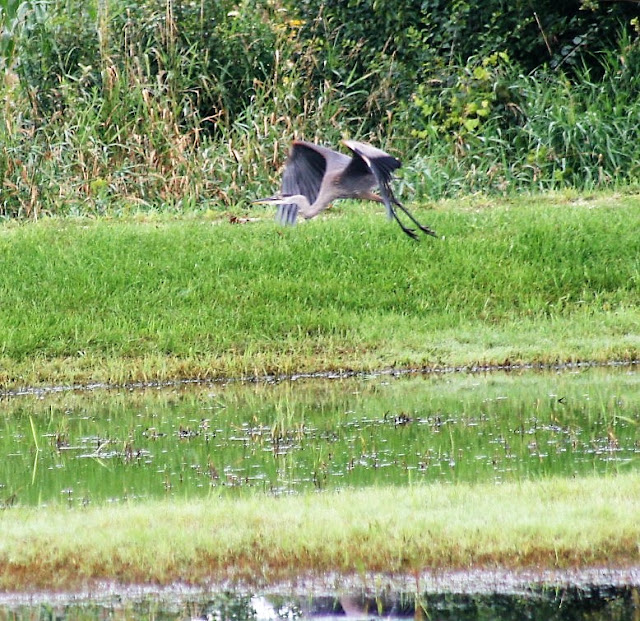 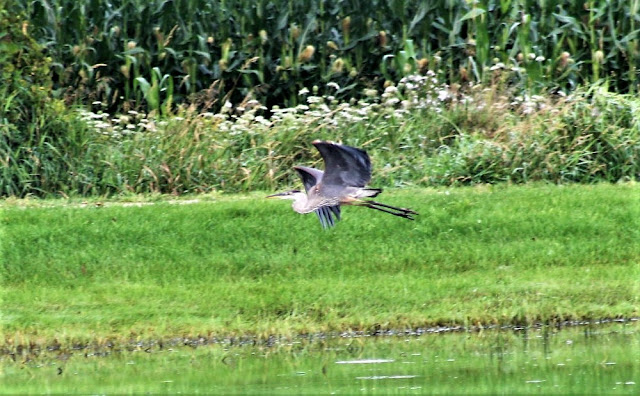 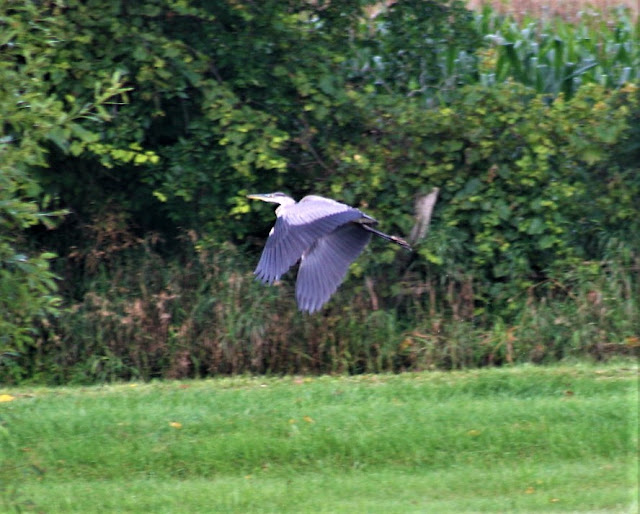 When I returned, the fog had not only cleared but so had the sun giving in to the heavy overcast sky. Darn! Bill texted at 8:15 that he had arrived after battling with fog for an hour and a half. He still makes good time. When I talked to him later, he said the sun was out full the other side of Stratford. Funny how we can be so different, well, I guess we are 2 ½ hours apart. 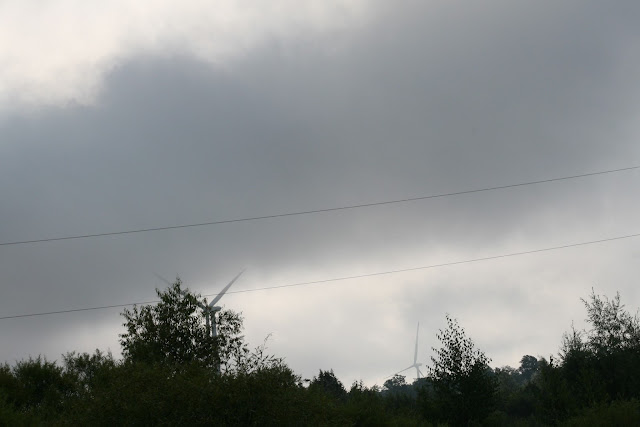 I am excited for today because I am meeting a girlfriend in Hanover for a late lunch. This isn’t an ordinary meeting. It is going to be interesting to see just what a 51-year void does to what used to be a close relationship. Barb and I were friends while we both lived in Elmwood. My family left this small village in 1966 after my little brother was born.  At 10 and 11 years old and about a year and a half difference in our ages, Barb and I had a few things in common. What will it be like now? I couldn’t wait to find out!

So, I fiddled around on my laptop, googling things of interest and reading blogs before making my second tea. I downloaded the 71 pictures I took this morning of the heron and other things on the walk down the lane. There was some deleting, some enhancing and sorting to decide which ones to keep. Don’t you love this digital age? Remember having to snap photos and hope like heck they turned out when you eventually sent them off for developing? I never owned a Poloroid.
The sun reappeared around 11 and I began to see some blue skies. Goody! On a whim, I went to my ‘Memory’ cupboard. I know I used to have a couple of pictures of my friend Barb, that she sent me decades ago. Unfortunately, taking photos was a costly endeavor in the mid 60’s. If Mom had had a camera, it was a valuable commodity and not something I would be allowed to use. Times were different.

So, I left the Suite around 12:15 and arrived at the corner in Hanover where Queen’s Bush restaurant & pub is located. As I’m turning, I see Barb out on the front sidewalk waiting for me. I waved so she knew I had arrived. She had no idea what I’d be driving. No parking in the back for Black Beauty so I pulled out and right in front was a spot just for me. The lunch gang had departed, and that was the reason for a 1 o’clock meeting.
We greeted each other with a warm hug and the years slipped away. Finding a quiet seat inside, mostly by ourselves, we slowly started into the conversation. As I said earlier, we’ve only got to know each other at a young age so there was a lot of things to find out about each other. I felt as if I talked a lot and hope Barb didn’t feel like I took control of the chatter. Usually I am the quiet one so that just means she is quieter! 😊

When I asked Barb how long it had been since we’d seen each other, she reminded me that it was before I met Bill but within the last 25 years. Still, that is a long enough time and the perfect time to get reacquainted. She lives in Point Clark, a touristy town along Lake Huron so next summer Bill and I will have to look her and Paul up.
We had a nice lunch, me ordering the Corn Beef on toasted Rye with creamy spinach soup. Me oh my! That was delicious! This is the 2nd soup the chef in this place has made that blew me away. Yum, yum, yummy! I recommend it! No pictures of my meal today but I did get one of my supper meal.

Leaving Queen’s Bush after exchanging phone numbers, I was facing the wrong direction to track down any little shops so headed back towards Durham. I haven’t been in the Dollarama for a while so stopped and picked up some new facecloths. I was looking for a few nice teaspoons but they looked more like baby spoons. I’ll have to get some at Wal-Mart. 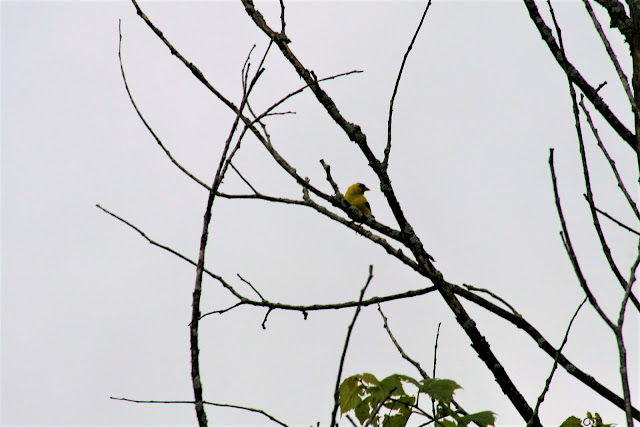 Beside the $ store was Giant Tiger, one of my favourite stores so of course I had to see what was on sale………….. in my size. I’m quite pleased with what I found and they weigh a total of 2 lbs. so I’ll find room for them in my drawer. Clemson and I took a walk down the lane to ‘get the mail’ (aka flyers on Wednesday) and then we sat under the awning for half an hour before coming inside. 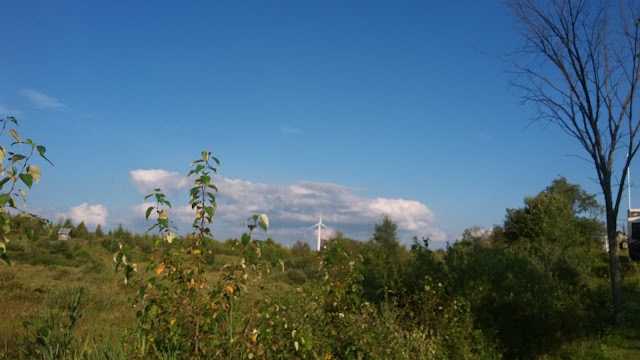 I read a few chapters and talked to Bill for a bit after feeding Clemmy.
My supper was easy, cutting up half of the leftover chicken breast and mixing it with salt, pepper and mayo before adding it on my lettuce, tomato, peppers and onions. I topped it with olives and enjoyed it with a small glass of milk. It hit the spot and I will top it off with an ice cream cone when I’m finished posting. My reward. 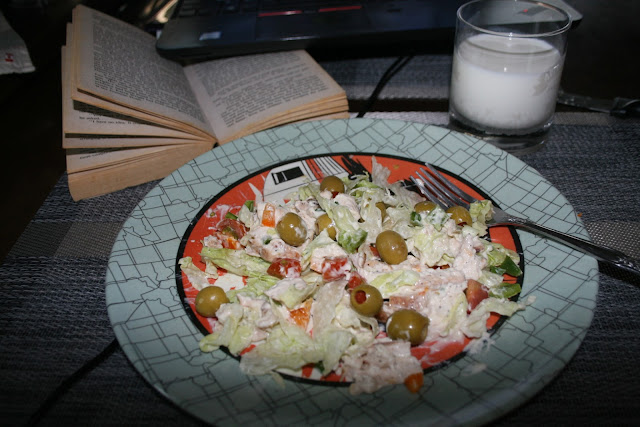 On a sad note, today is the anniversary of the death of one of my favourite entertainers. It was on August 16, 1977 that Elvis died. In my opinion, the world tilted a bit off its axles when that happened. As a 22-year old I remember thinking there could be no worse news. 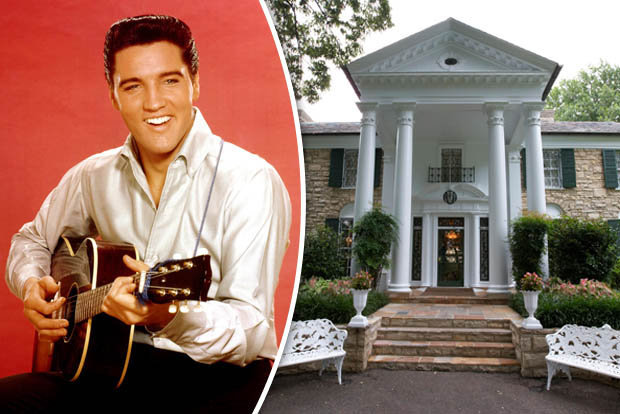 Now, 40 years later I still get teary-eyed when I watch one of his performances, and downright sob when I see him performing in his later years.

I cleaned up the dishes and downloaded the last of the pictures I took today. It was a pretty sunset this evening so had to capture what I could of that. I’ve had a great day and I hope you have too!

Thank you for stopping by. I love to read your comments if you have the time to leave me one.
Posted by Patsy Irene (Chillin' with Patsy) at 7:13 PM