The Ridge
On Saturday, Aug. 3rd we slept until 7, again indicating how we needed to catch up on sleep. We got up and had our morning brew together before I hopped in the shower. Bill had some yogourt and then he did the same while I had some of my own. I packed a swim bag, a cooler bag and found something cool to wear. It was going to be a hot day.

From home at 9, we drove to London to pick up a few item’s that Bill had ordered from AVF (the hobby store) for his Telemaster. We were hoping that my new camera would have arrived as well (2 birds, 2 stone) but no, it wasn’t in yet. After seeing Derrick, Jeff and Bobby at AVF, we drove across the city to Costco and picked up the few dairy items that we needed. Not too many today but we did need to get something to take to a barbecue this afternoon.

By the time we left Costco and checked at Henry’s Camera Store, we were ready to eat. Our favourite family-type ‘haunt’ for eating is Southside Family Restaurant on Exeter Road so we went there and had breakfast. My Denver omelette was yummy and so were the home fries. Bill had the egg and sausage meal with home fries too. It was the perfect meal and a very reasonable cost rather than going to a fast food place.

Bill’s sister, Carol, and her husband, Brian, invited the family to a reunion of sorts to celebrate Dad’s Aug. 6th birthday. He would appreciate that we are all getting together even though he is no longer with us. The day was perfect! So once out of London and off the 401, Bill pulled over so I could drive and he could have a bit of shut-eye. I almost made it to Sebringville before he woke up and we arrived at 2:30.

I usually make something for this kind of gathering but really didn’t have the product or the time so a large veggie tray and dip fit the bill nicely. The above ground pool looked so inviting. Family arrived and it was nice to see that all of Bill’s daughters, spouses and most of our grandchildren were able to make it. We all missed Braeden, Yvonne’s oldest, who had to work. There was some imbibing, some munching and some swimming. It was a very nice time.

After burgers and dogs and salads, it was around 7 when Bill and I packed up and said our goodbyes. We also had my family gathering at Donna and Gerry’s this weekend so we scooted home to change, unload groceries and head over on time for some campfire time. It is a smaller group each year, too much going on for everyone in other parts of Ontario.

There were only 13 of us around the front fire at any given time. Wendy and Morgan were roasting marshmallows so I had a couple with them for a treat. A sweet gooey treat, it has been forever! 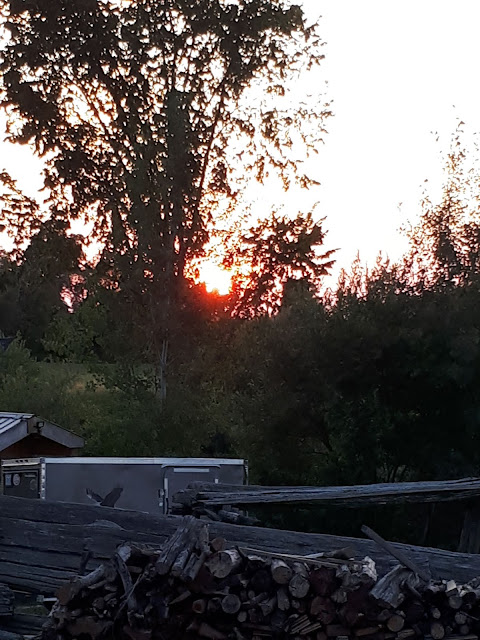 Bill and I were feeling the effects of the long drive so by 10:30 we took our chairs and headed home. It wasn’t long after that we were both sound asleep. These have been some awesome days for sure and even more on the horizon. I hope our fellow Canadians (who get this holiday) are enjoying your Civic long weekend too.

Posted by Patsy Irene (Chillin' with Patsy) at 7:13 AM