The Ridge
It was different waking up on Thursday, Aug. 22nd remembering that I was on my own. Since it was only 5:30, I snuggled with Sergei in Clemson’s spot and drifted off and on until 6:00. Good thing I’d closed the windows last night, it was chilly this morning. Without wasting anytime, I texted Bill that I was up and we chatted then by phone.

Leaving the Suite around 6:25 gets me to the Mat at 6:35. After backing in, Rob greeted me on his morning walk and we chatted for a few minutes before I went to start work. Jamie has been busy! There is a ramp right inside the back door, removing the need for a ‘watch your step’ sign, making it wheelchair accessible and removing about 2’ of the shelf for folding right inside the door. All very good ideas.

Then when I went to open the Lock Up, I noticed that he had changed the door from opening out into the narrow hall to an inside opening. There were a couple of things making this entry more difficult for me but only because of tools they are working with. Once I moved a machine out of the way, it was quite easy and would make the process of a few things much better.

I was alone until 7:05 when Bonnie from Welbeck’s popped in and it was 7:15 when a regular Polish customer came in the front door with a friendly “Good morning, my dear!” He hadn’t even seen me yet but knew I was there. 😊 Nice, harmless fellow who indicated concern when he saw Jamie doing a sweep through one night. He wondered what had happened to me? I can’t understand 75% of what he says, his accent is very, very strong but I do my best to communicate.


It was 7:45 when I left the place, clean once more, and drove to Rob and Pat’s to use their wifi. I had texted and, of course, Pat invited me in. I declined with thanks and hoped to get my pictures downloaded and blog published quickly. That didn’t work as well as I’d hoped, my pictures were taking forever so even after a fruitless attempt inside their home I conceded defeat and drove home. It can wait until tonight or tomorrow and I’ll go to the library again.

Back home, I parked B.B. down in her spot and came inside to make my tea. For some reason, maybe the frustration over my blog, I felt hungry so had a couple of small pieces of zucchini bread with butter. Yum, that went down quite nicely. With my tea finished, I tried calling my sister in Montreal. Today is her birthday and although I usually don’t call sibs on their special day, my cards generally arrive on time. This year, it wouldn’t be there so I wanted her to know I’m thinking of her. The line was busy a few times so I left a singsong text instead.

I wanted to have a shower but (there’s always a ‘but’ – my Dad would say) I got distracted in the bedroom. Since I brought 4 new pieces of clothing home yesterday (yes, I did! – they were practically giving them away!) I needed to purge of 4 or Bill and I say the rule is 8 things from my closet or drawers. Well, I made short work (figure of speech – because it took me the better half of two hours) of that project but managed to move a couple more things to the Cancun cupboard and purge about 15 other things for the exchange bag. I was very critical of stuff.

Then, instead of hopping in the shower, I made myself a b.p. coffee and sat at my laptop to start today’s post. It was 12 noon so I had some yogourt and took my coffee out to the Bunky. Around 11:00 I noticed that there was more sun than clouds so I unplugged from power and turned the inverter on. No point in wasting sunshine! The rest of the day sweeping and cleaning up the Bunky. I made the bed up for our guests and opened the window for a couple of hours to air it out. I think it will be quite comfy in there.

I started into the next James Patterson book that I had left to read. The Quickie. It was going to be another fast read. Inside, I started pulling things out to make Choke Cherry Jelly. I’d found a recipe yesterday that sounded easy enough. Lots of instructions but that was typical for jam or jelly. First, I had to clean the cherries and make sure all the little stems were removed. That wasn’t as hard as it sounds even though they are tiny. Most pulled off when I picked them.


When the recipe I had called for 12 cups I knew I had to cut it in half but even then, I only had 4 cups of cherries. That didn’t deter me and I took a bag down the road to the bush on North Line and picked 2 more cups. The process went smoothly from there until I got to the last part. “Lift the processed jars of jelly out of the canner without tipping them.” Hmm, one slipped out of the tongs and tipped so I sure hope that doesn’t ruin the batch!


It only made 3 jars but from the taste on my fingers (from the tip over) I think they will be yummy. If I get ambitious, I may pick more off the bush and fill another 2 or 3 jars. Clean up was the worst part, at least it looked like it.


Many pots and pans were dirtied in the process of making this delight.

I got the dishes out of the way and sat and watched the last 45 minutes of On Golden Pond before Bill returned shortly after 9. He’d had a long day and once the groceries and his stuff were unloaded and put away, I got into the package I was waiting for.

Yes, my new Canon camera was in at Henry’s so Bill brought it home for me. The battery needed to be charged so I couldn’t do much fiddling with it but it sure is pretty! I’ll be anxious to get my hands on it tomorrow. I’m looking forward to having a nice pocket size camera to use again rather than my phone. My Samsung takes good pictures but it takes a longer time to download them onto my laptop.

Now that Bill is home, I can relax again before going up to bed. It has been a great day, seeming so long ago that I drove into work. My jelly has to sit and cool for 24 hours and then we get to taste it. I hope you’ve enjoyed your day. 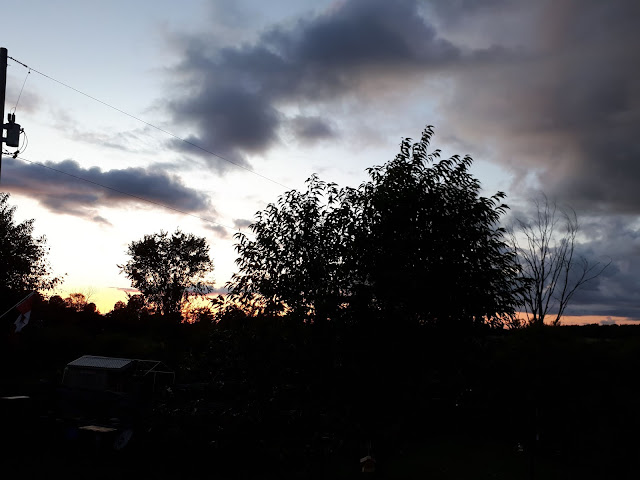 Posted by Patsy Irene (Chillin' with Patsy) at 9:25 AM