Laundry Day, Windy Up Here, Checked Baggage and Clean up In Lane Way

After a wonderful afternoon and evening with Bill’s family yesterday, we slept well until about 4 am. We were in bed and asleep by 11 but perhaps the coffee at 7:30 pm was the culprit. No worries, no regrets, it was great to see them all. We woke next and got up around 6:30-6:45 on Sunday, Oct. 6th. Bill first and I followed. It was still dark so we sat and had our morning brew together.

I had a blog post to write, having just created a title yesterday morning. It was too busy to do more than that!  I finished publishing, finished my tea and drove into the Laundromat to do the laundry. It got busy, which is nice to see, and I received a compliment about how clean the place always is. Gotta love that! I had taken my work keys and glad that I did as I needed to clean a washer for a customer.

After 2 days of someone else not removing their clothes, it smelled musty. I took the liberty of removing them into a cart for her and giving it a wipe down. She was very appreciative since the others were full. I’d decided already to use two dryers as we were supposed to get rain this morning. It still hadn’t rained by the time I was heading home at 9:30 but I was just as happy that for $8.75, the wash was done and folded. turns out, We never did get any rain.

We wanted to see Donna and Gerry while they were at the Acreage today as Donna brought a couple of suitcases out that would be suitable for our checked bag. We’ll have a look and maybe I won’t have to ‘scrunch’ my clothes so much. Bill was getting hungry so I made him bacon and eggs. We took care of the dishes and he went out to work on the mud/stone guard for Black Beauty. He had purchased new rubber and lights and Bob had some of the ‘sweep bristles’ that he offered to Bill too.

At noon we drove over to the Acreage. While there, we helped them take the car cover off the frame so it could be folded and put away for the winter. We, nor they, are sure how much they’ll get out before we leave and these are little things where extra hands make a big difference. We chose the suitcase that would work best for us and around 1 said goodbye. The sun was coming out so we wanted to get at some of our outdoor stuff too. I was hungry when I got home so had some peaches and cream with granola. Just enough until supper.

Then, I went outside to trim the tiger lilies at the end of the lane. I took the wheelbarrow down with 2 different clippers. Long and short bladed ones so I could also cut some low branches on our very fertile apple tree down there by the fence. The lilies turned out not to need clippers, they were ready to say goodnight and with gloved hands, I easily broke the stalks and leaves off at the base. It isn’t an overly neat row of garden along there, with grasses growing close to the geranium plants, but I still like it.

By the time I’d finished that garden, I cut the apple tree branches that my clippers could cut and soon Bill joined me with the chain saw. It was easier for him to cut the bigger ones. What a shame, looking up into the tree to see still tons of apples. I’m sure I heard a weak ‘pick me, please pick me!’ but I only grabbed 5 good ones to bring back up and eat this week. I don’t need anymore apples! These are the best ones on the property though.

After a couple of wheelbarrow loads up to the rubbish pile, I’d had enough and when Bill finished a few things on his list, we quit for the day.

I sat outside at the patio table with my book and watched dragon flies, geese and even a caterpillar dropped from my boot and crawled like crazy across the carpet and under the Suite. I don’t know what his destination was but he was sure moving. My book was too good though to dwell on the little guy for too long. I didn't get pictures of the dragon flies as they kept landing on my peach coloured top.


When I came inside, Bill soon closed his book and had a little nap. He has a drive tonight again so wanted to be rested. I finished The 5th Horseman by James Patterson and it was a great read. I have 3 more J.P. books in the cupboard so will just move right along. At 4 I got the roast out of the fridge and after adding salt and pepper, sautéed it in Madame IP. I’d used all our potatoes up yesterday so had to get creative tonight to give Bill a nice meal.

Then, when ready to cook under pressure, I added the inner pot with carrots, a piece of spaghetti squash and yams. We soon realized that it was too high for cooking so removed the pot and will add them near the end for a few minutes. We were eating by 5:45 and as usual, everything turned out tasty. I will have roast beef for a couple of nights this week and I have no complaint about that. I'd made gravy on the Saute setting and I love gravy with leftover beef. This was Plan B when we didn’t have the roast on Friday night.

Bill was packed and headed out around 6:20 and would be in Tavistock by 8, ready for another week’s work. The sun was wonderful this afternoon and although very windy up here, upwards of 20 mph at times, it was a pleasant 63F/18C. We sure can’t complain about that. I know that this week will bring some nice sunny days so I should be able to get all of my outside chores done without any difficulty. The weekend will be full as well so good weather is very important right now.

So, the saddest part of my week began as I snapped a picture of my sweetie getting in Black Beauty at the bottom of the hill. I washed the dishes and then decided to go for a walk to the end of the lane and capture the sunset. I’m sure you get tired of the same view of it so you get a treat tonight. While walking back, I decided to grab the trunks of some of the branches that Bill cut along the lane. 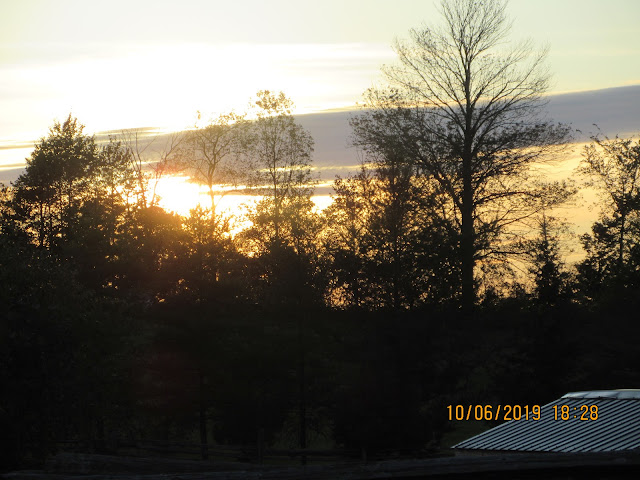 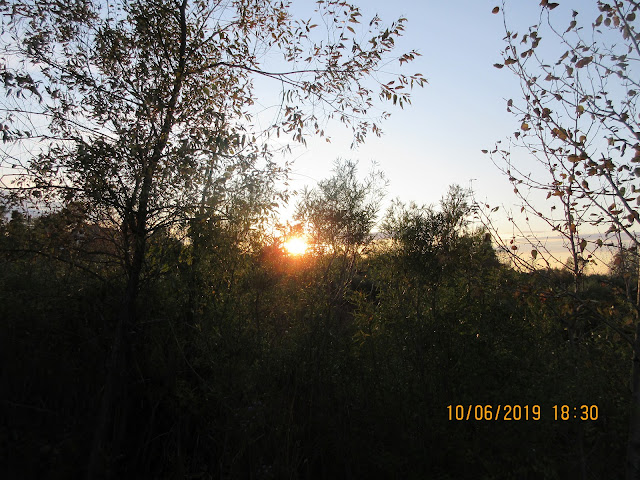 First, I thought, I would grab some each time I came up the lane on foot. Then, after one trip, I thought, what the heck, I’ll do one more. Then I was so close to my 8,000-step mark today that I would take a third trip which turned into a fourth and last. There is still more to clean up but another day, another walk. 😊 These ones had nice smooth 1-2” diameter trunks so I didn’t need my gloves. The rest are a little harder on the hands.

Back inside, I decided to have some lime Jell-o. I don’t think Bill cares for it as much as the raspberry or strawberry as he opted for his last yogourt cup instead. Oh well, I’ll clean it up this week then. I sat and finished my post before settling down with Worst Case by J.P. First 2 chapters and I’m hooked. This has been a good day and we managed to get a few more things done and crossed off our list. I hope you have been out enjoying the nice weather too.