The Ridge
On Tuesday, Oct. 8th, I woke up as per usual around 6 but rolled over and drifted off and on until closer to 7. Bill and I texted back and forth just to say ‘good mornings’ and ‘I love you’s’. He is on his way to work by then with Bob. It was still dark out so I opened the blind and took my time with my stretching before getting up. I’d had the heater on last night but low so it was just 62F in here. Just right for sleeping.

I stuck my head out the door enough to shiver in the 37F and say to myself, ‘Nope, not walking yet’. Instead, I made my tea and sat catching up on what our blogger friends have been up to. Once caught up there, I dressed warmly (I love my puffy vest!) and went out to greet the day and the beautiful sunshine.

There was no wind at all by 8:30 so it was a wonderful walk. My mind wanders when I’m walking alone like this, out in the countryside, in the peacefulness and you’d laugh at some of the things that cross it. I’ll keep them to myself. Ha ha I do really enjoy the walk though.


By the time I’d returned, 2 miles later, I was suitably warmed up and then some so turned the heater off inside. It had warmed up 4 degrees since I left and I knew it was going to be a perfect summer-like day.

The first thing I did was bring the filled Space bags (vacuum) from the Bunky and took Bill’s suggestion to fill them using the outside hookup. That saves lugging them inside the Suite and then back out again. It took me a while and a lot of muscle to get the connection for some reason but Bill said he had the same difficulty when he used it last.

Persistence paid off after hearing that and finally I got it and was able to suck the air out of 4 of the 5 bags. The last one must have lost the seal somehow but at least it will be closed and nothing can get at the pillows inside. They all fit, with that one exception, up in the loft plus an extra bag of wool that I won’t be taking along. That was a job well done so I brought the hose inside to vacuum the Suite next. I went upstairs with my b.p. coffee to see how the suitcase we’d borrowed from Donna was going to work.

Oh, I knew I’d be going through the Cancun clothes at least one more time and this never feels like a chore to me. Each time, one thing either comes out or one thing gets added but this morning I was more particular than ever regarding how many outfits, shorts, tops etc. I was taking. I’m only taking 2 pair of shoes in my bags and wearing a pair. That’s pretty good, if I do say so myself. I’ll bet Bill takes that many!

Once I was satisfied, I neatly packed the ‘checked’ bag items and left just as much room for Bill to do the same. Then I laid out the items that need ironing before going into the backpack. These are ‘carry-on’ items that in case the checked bag gets lost or delayed, I can still function for a couple of days. We’ll have to pay close attention to the size of the lotions and liquids we take as most are bigger than the 100 ml that is recommended/allowed. We’ll use what we can of the hotel’s room offerings but things like sunscreen pose questions.

After finishing with the clothes, I focused on the jewellery I’ll take. Especially the wedding adornment. I have nothing expensive, except my wedding rings so I’m not concerned about losing any of it, but I’d like to have options if I feel like wearing something. One of those little roll-up accessory holders takes up very little space so I chose a few variables. Then, leaving the few to-be ironed things, I was done. A makeup bag is the last thing to pack, the day we leave here.

Before vacuuming, I realized it was 1 o’clock so needed to eat something. There was some of the southwest salad left so I added the last soft-boiled egg with dressing and ate that. It was quite good and filling with a delicious peach afterwards. Sitting here at the table, I saw UPS zoom by so figured no parcel today but still watched for his return trip on North Line. That truck didn’t come back this way but my driver soon turned into the drive from Baptist Church Road and brought my Avon order. Tomorrow, I told him that I‘ll see him again, that is when my 2nd book says it will be delivered. No problem, he says! Inside, I opened the box and put the gels and deodorants away. 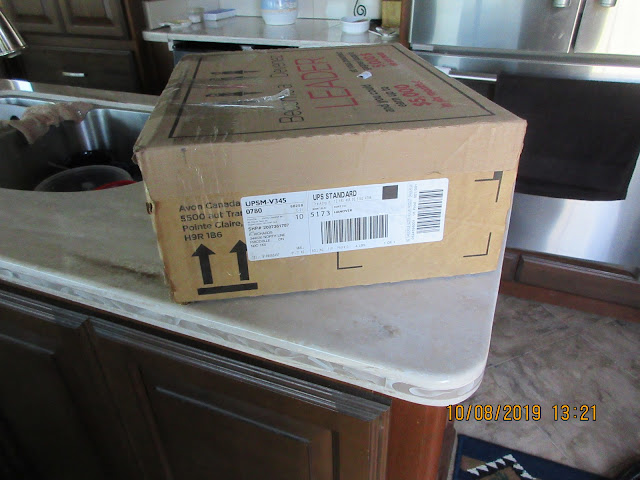 Okay, time to get back to work! I vacuumed top to bottom making sure to get the tile floors really good since I wanted to wash them. Then I got the pail out from the Basement, added Mr. Clean and water and gave the bathroom and kitchen floors a good scrub. There isn’t a lot of floor to wash so I added more water and went outside. I’m disgusted every time I look at Ptooties and she looks really sad about being so dirty too. With the big scrub brush, I did what I could to clean her up.

The problem with washing our vehicles up here is having no water from a hose for the final rinse, especially. I’ve seen Bill do it with other things and since I’m not familiar with the pressure washer (nor if it is still working?) I did it the old-fashioned way. I backed the car up to our Suite’s back side where the spray hose is. With the knowledge that there was an almost full tank of fresh water when Bill left, I didn’t hesitate to use it. I felt it was necessary! By the smile on Ptootie’s face when I finished, it was worth it.

I went into the Bunky and used a couple of old towels to stuff into the window jams since they aren’t 100% airtight. Maybe 95% but we don’t want any cold air or frost sneaking in those windows. Washing the car was not on my list but I did cross off a couple of things that were, so today was a successful one. It was 3:30 when I came inside and knew that I needed to have a shower. I texted Bill so he was aware in case he called and wondered why I wasn’t answering. He was just finished work so I caught him at the right time.

The sky today hasn’t wavered, a lovely shade of blue with no white adornments like yesterday. I took a walk down the lane to check on the mail earlier and was happy to see that the birthday cards were picked up. I hope one in particular isn’t late but it might be because of the holiday. The radio was on and as I was catching up on my post, I was jiving and singing along to Meatloaf’s Paradise by the Dashboard Lights. Always a fun song.

With a nice hot cup of tea, I decided to stay put and read in my chair for a bit. The patio is in shade now, at 4:30, and as much as I could move my chair around out there, I’d been outside enough today. I sat and read a couple more chapters and turned NCIS on in the background. At 5:30, my hunger got the better of me so I nipped outside to plug us in and set the microwave on reheat for the roast, carrots, gravy and asparagus. Within 10 minutes, I was eating and it was great!

I washed the dishes up right away so I could relax for the evening. Bill called to let me know he had just arrived at his oldest daughter’s in Tavi. He was stopping in to deliver cards to our twin grandsons, Carter and Zach, who will be turning 13 on Sunday the 13th. I asked him to give them a hug from Grandma too, I won’t be seeing them before we leave for the southwest. I will, however, be seeing Yvonne and Dennis since we are all going to the Cancun wedding.

Sitting at the table, the air outside has completely calmed again even though today it didn’t get too windy. Looks like 6 mph was the highest, according to the anemometer. This was a great day; the temperature rose to a sunny 63F, I got more things done and enjoyed the day at the same time. Tomorrow will be another busy one, more on the social side of things though.

Thank you for stopping in. If you care to leave a comment, I love hearing from you!

Posted by Patsy Irene (Chillin' with Patsy) at 6:17 PM