Another Wonderful Sun-filled Day, St. Bernard, Chalmette and Arabi and Beyond

Richard's RV Park, St. Bernard, LA
On Sunday, Nov. 10th I was up at 6:15, dressed and slipped out for a walk. The park isn’t that big but I walked as far as I could and repeated one lane just to extend the pleasure outside. I met Jo-Anne and Higgins as I rounded the bend back towards ‘home’. Little Mr. Wetpaws is always happy to see us (anyone, actually) and that reminds me of our little bum. In a good way. 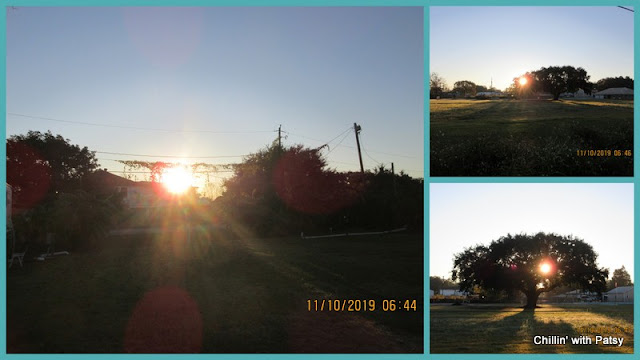 Back at the Suite, Bill had also risen and was making his coffee and then my tea. We sat and read some blogs and then called back home to chat with our buddies, Rob and Pat briefly. Nice to hear Rob’s voice. I had a bowl of cereal, after opening a new pack and securing it tightly, and Bill had some toast and peanut butter. Then we cleaned up dishes and ourselves for a bit of sightseeing with our friends.

The day was perfect, clear blue sky, sunshine, little breeze and a temperature already reaching 59F/15C at 8:30. My sister says it is a mild +2 back home but dull under clouds so they are improving a bit after sending the cool stuff southward. We don’t want it, I’m sure I told her that! After a couple of nice warm days here, it will drop considerably for a few. Boo hoo, right? 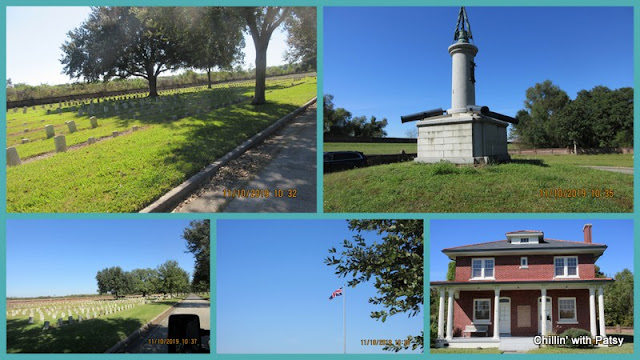 At 9:30 Bill and I sat outside and soon after Jo and Bob came out after setting Higgins up with some a/c inside Big Red. Bill drove and we drove first to Arabi where there is a Tourisim Office. Unfortunately, by the time we found it, it was closed. Sunday. Go figure! The day people are out touring and it was closed. No time sign posted anywhere so we assume for the whole day. We left there in Black Beauty, navigating through the very narrow streets of Arabi. 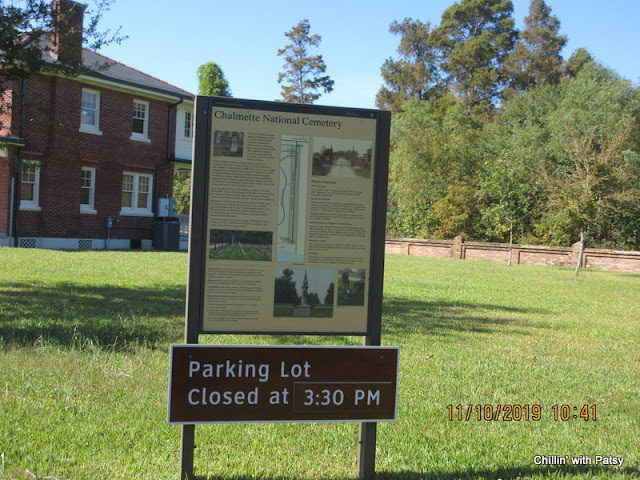 Tried to find the Sugar Museum (sugar cane) but found ourselves in a very ‘po’ side of town, difficult traversing around things. Enough of that, we came back to Chalmette and found the Chalmette National Cemetery. Bill drove slowly through the tree lined lane where over 15,000 veterans of American wars and their dependents are laid to rest. Of these, 6,776 are unknown. Now, if that doesn’t tug at your hearts, I don’t know what will.

We drove from there back to St. Bernard where I had listed a couple of historical things to see. First, the Los Islenos Museum, where after Katrina all buildings were brought in and placed in this grouping. This is a self-guided tour of homes that we all enjoyed very much.

After speaking to the Islenos Artisan, Rodney, we drove to the St. Bernard Historic Courthouse. From the script above the doors, we learned that this was formerly Beauregard High School. This was not open, again it was Sunday, but it was a beautiful white stately building. 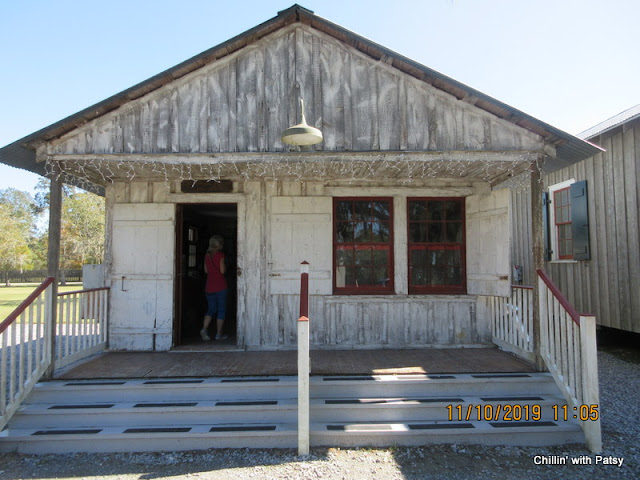 I was intrigued with even more large trees here with thick strong branches extending across the whole yard. With that weight, I’m amazed that they withstood the storms and hurricanes known in this area. Jo-Anne said, wouldn’t children love to climb these trees? Bill noticed that they had strings of lights from trunk bases up into the higher branches so either ready for Christmas or just evening decoration. 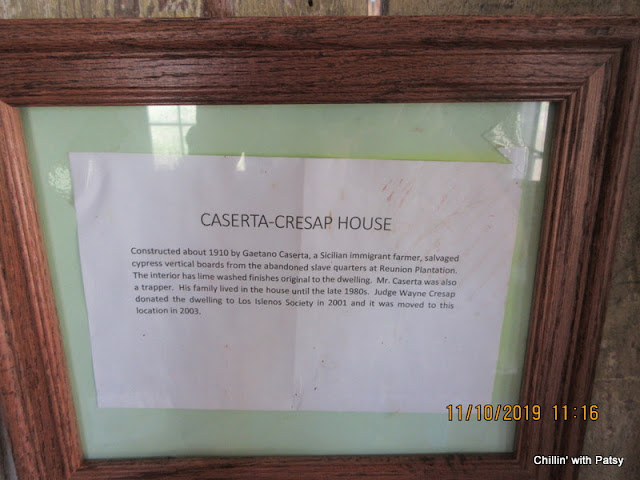 The day could have ended there and I would have been happy but Bill decided to drive us to New Orleans for a quick tour. Is there such a thing? I enjoyed the drive to and from and got my eyes filled with some pretty amazing (interesting, scary and otherwise) sights but I’d be happy never to go downtown in such a large vehicle again. Ha ha. I’ve never seen so many one-way narrow streets but Bill had a destination in mind and as much as possible, he followed the gps around and around again.

Eventually, to my relief, he steered us out of the busy Decatur St. section (we never did see Café du Monde) and back towards Chalmette and St. Bernard. It was almost 2 pm and we’d all eaten breakfast before we left so we were hungry. Jo-Anne suggested Charlie’s, a diner recommended by our camp host, so we stopped there for ‘lupper/linner’. It was quite the menu but we all found something suitable and basically ‘pigged’ (or is it ‘crabbed’?) out. 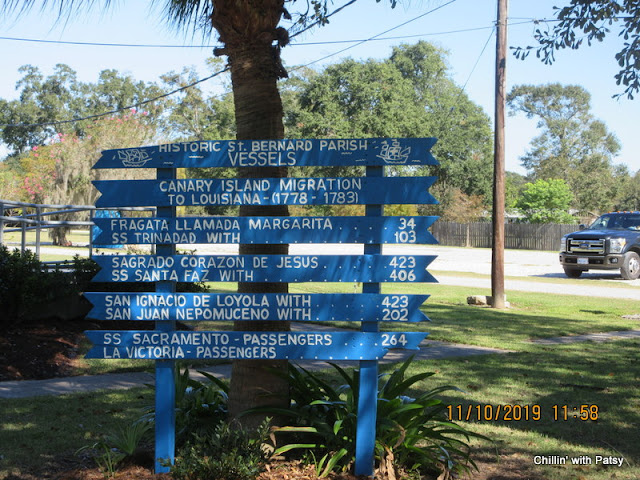 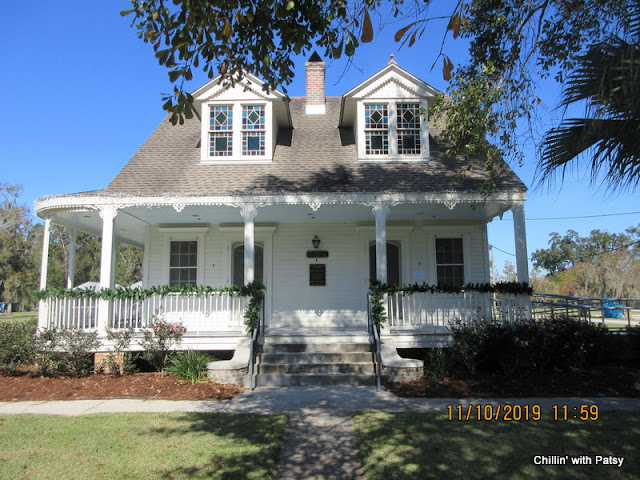 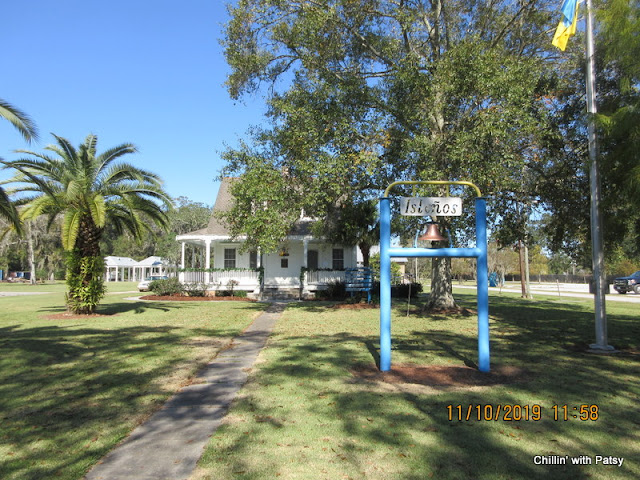 I had the stuffed jumbo shrimp with sweet potato waffle fries and a garden salad to start. My oh my! It was all delicious but with the free refill on my Zero Coke (cooling my mouth when needed) I had to ask for a box for the remaining shrimp and fries. We were stuffed and agreed that supper would be just a snack. Bill drove us home and we returned to the Suite and I’m sure a happy Higgins, next door. It was close to 3:30.

Our driver set himself up in his chair and was asleep instantly. I caught up on my post and then sat as well, with my book. The sun was low in the sky so I needed to find a spot in the sun. I wasn’t out long and the sun disappeared. 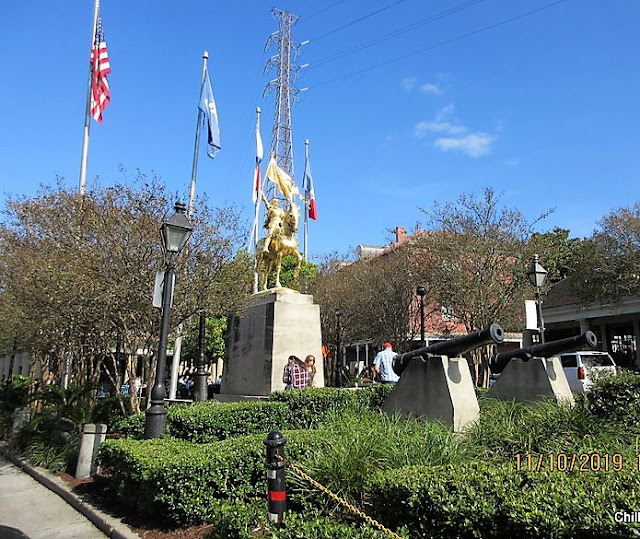 I know Jo-Anne and Bob were out with Higgins and they had sun but I didn’t figure I’d be out long enough nor would the sun be, so stayed put. Both Bill and I greeted Higgy and got licks and jumps ‘hello’, the little guy had been alone for a while. Then, we moved inside.


Bill started looking for a place for us to park tomorrow in New Orleans. Once he started searching, I pulled up Pat O’Brien’s place on St. Peter St. where we ‘need’ to get a recommended drink. Looking for places to park near there, I noticed that we can reserve online, in advance and then not have to worry about that the day of. We booked a spot and Bob has offered to drive. Now, I’m looking forward to it as we’ve briefly seen the French Market on Decatur St and it is much more appealing than most other streets. I’m ready.

Naturally, we weren’t hungry at supper ‘time’ so just sat with our books. Bob and Jo-Anne had already tried the fix for their Wineguard antenna to no avail so they will likely be watching another movie tonight. Bill went upstairs to watch more of his Hallmark movies so I stayed downstairs and will continue watching recorded programs. That is where our tastes differ. Or, I may read my book. I’ve started a Nelson DeMille book called The Gate House.

I continued with my post for today and settled in my chair. It was early, only 5:30 but it was dark already. The temperature was a comfortable 64F and only going down to 54F overnight. We may not need any heat at all tonight. This was a great day! Some sightseeing under our belt so now I have to sort through my pictures to decide which ones to share with you. I’ll apologize now if there is an overload.

Posted by Patsy Irene (Chillin' with Patsy) at 6:06 PM