Morning Walk Along the Beach, Critters Galore, Reading and Sunbathing

Elephant Butte Lake State Park
So, on Tuesday, Nov. 19th I wasted no time. Up at 6:15, dressed with a hoody, wind breaker, my vest, runners and my crocheted scarf, I was ready for a walk. Bill began making his coffee so had understood that I didn’t want my tea made yet. With a good morning kiss, there’s a private little joke there, I was out the door.

It was still a bit dusky but I could see on the eastern horizon that we’d have more sun today than I expected. It was 44F/6C and I’m glad to have found a pair of mini gloves and to have my head scarf to cover my ears.

There was no wind but the brisk air was cool all the same. I headed down the lane towards the lake. I could see a man and his dog along the beach and soon discovered that he was there not only to walk with his best friend but also to snap photos of that beautiful sky. 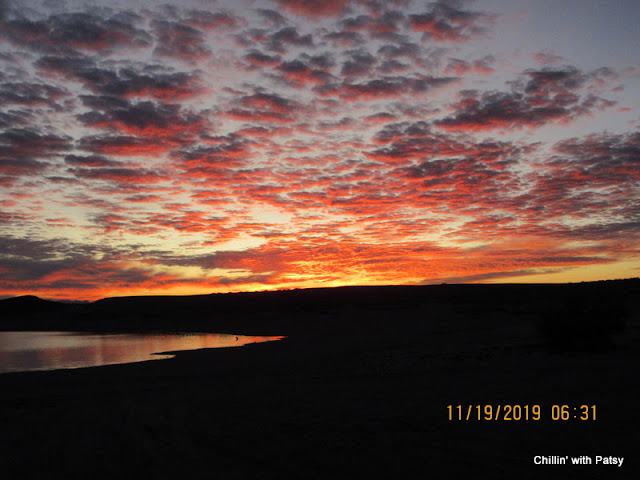 Each picture had me curious for more so just kept walking across the sand, up hills and down through the shrubbery where bunnies and quails hide. It felt good to get out and get my Fitbit sated again. 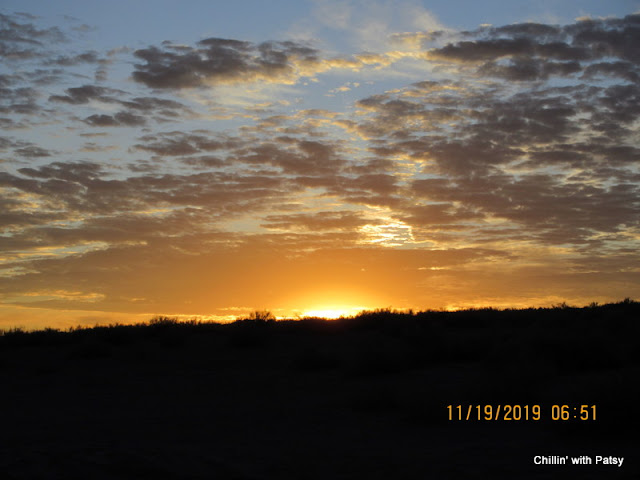 At least start the motions of an early morning walk again. Back at the Suite, I was fully heated up and made my tea and sat to read the few blog posts I missed last night. Bill hadn’t opened the blinds yet so I did that to let the sun shine in.
By 8:30, Bill and I both were in shorts and he was outside emptying the basement to vacuum and spray for ants. There was another reason for doing this and without taking away from his post I will just say that he has a great idea for some work he wants to do under there. I sat outside in the sun with my book for an hour or so and then came inside for my shower. With that out of the way, I cooked us some bacon and eggs around 10:30. We’d not had them for a few days and they tasted good.


Bill was puttering around outside with various jobs after dishes and I moved out to my lazy, er, relaxing chair. My book was good and it was a good time to read it when I wasn’t tired. The sun was gorgeous and we got up to 72F today. At one point, Bill had moved the satellite dish and when I came inside, he was very happy to have retrieved a good connection. Not the best we’ve had and still in the yellow but good enough to get our programs tonight. 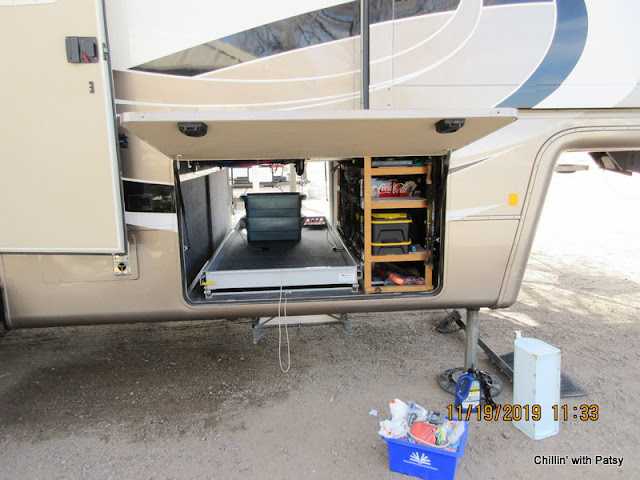 I moved back out even though I was now in the shade. It was still quite warm in my shorts. Clouds had moved in ahead of the showers that are forecast to start tonight. For some reason, we are in for a week of cold weather again. This is really strange. It seems we get a couple of warm and then hot days before it drops off again into abnormally cool temperatures. Fortunately, there is going to be a fair bit of sunshine throughout so that will help and it still isn’t anything like what they’ll be getting back home. 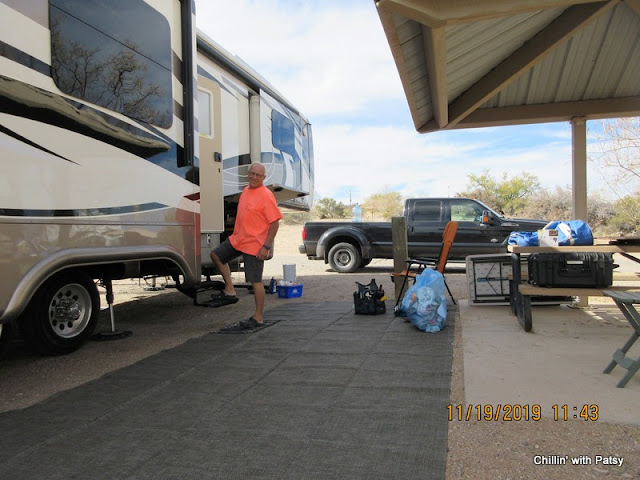 Around 3, I took my book indoors and watched some NCIS reruns with Bill. Now that we are 2 hours behind Ontario time, we have to catch our programs that much sooner. When it is on at 8, we have to watch it on our Shaw tv at 6. That means when Bill is barbecuing supper, like tonight, he needs to start earlier. Plus, it gets dark that much sooner so it is a win win all around.

We went for a walk to take the garbage to the dumpsters and came back down row Loop A. Once we saw that there were 4 sites to reserve up there, we checked which one was closest to our site, just over the hill.

Jo-Anne, at her end in Brownfield, TX, is trying desperately to get one booked. They will be arriving tomorrow. Yay! Together again. The air has sure cooled off although it doesn’t reflect that on our indoor thermometer.

The winds have picked up and we already know that we’ll have high gusts throughout the day tomorrow. Bill says the cool air I mentioned above is coming in from the Pacific coast, not that we feel any better knowing that. Good grief! I’ll stop whining now. 😉 I read another chapter of my book and then prepped the chicken breast and pork chop for the Weber. It has been a while since we’ve had these bbq’d.

I guess I spoke too soon as while Bill lit the bbq and I washed the potatoes, the satellite dish lost its connection. Darn it! We were all set up to watch some programs and record others. Either the heavy clouds or the strong winds were enough to spoil that but never-the-less, no tv tonight unless we want to put a dvd in. Our supper, on the other hand, turned out great! Chicken/chop, baked potato and Caesar salad. Very nice.

After dishes, we both sat at our laptops and turned the radio back on. May as well listen to some tunes. This was a great relaxing day. Bill accomplished things and I read quite a few chapters of The Gate House while catching some sun’s rays. This author has created a character in this book that I love. I've laughed out loud many times.

I had a great view from where I was sitting and also enjoyed watching the critters running around. We’ve seen more road runners already this year than all of our previous 3 years put together. Now, I just need to find ‘Jack’ and I’ll be 100% content.

I hope you’ve enjoyed your day as well. Thank you for your visit today.

Posted by Patsy Irene (Chillin' with Patsy) at 7:04 PM