Quartzsite, AZ
On Thursday, Jan. 23rd we slept in a bit. It was closer to 7 when we both got up. I can’t believe I slept so long! I was in bed by 8:30 again last night. I just couldn’t keep my eyes open. Bill had plans to go flying with Keith this morning so as soon as it was light enough, I went for my walk. It was actually probably closer to 8 when I got out the door. It was a lovely morning, around 46F/7C, with a clear sky and no wind.

By the time I returned, Bill and Keith were ready to go. Keith drove today and they took Oreo along to the Quartzsite Flying Field. 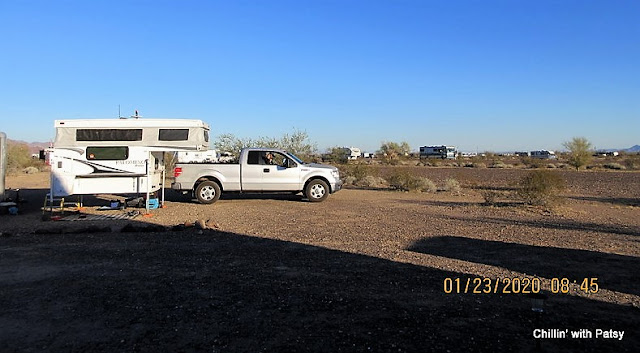 Bill and Keith and Oreo going to the field

I made my tea and sat outside with my book. It was only 51F yet it felt like 70 in the heat of the sun. Ken and Shirley were packing up and pulling out this morning and I didn’t want to miss their departure. However, I needed to have my shower so kept an eye on how close they were to being ready to leave.

Ken and Kim had taken their Journey up to dump and to take on water just before 8:30 so I figured K & S wouldn’t leave without waiting for their return. Finally, at 10 o’clock, when I saw them visiting at Tom and Deb’s, I slipped in for my shower. They weren’t going anywhere anytime soon. Good timing because as I was sitting outside letting my hair dry in the sun, Shirley and Ken came over to say goodbye. We hugged and wished safe travels and all that good stuff. We’re hoping to see them again in February.


Bill and Keith returned shortly after the noon hour and I warmed up a can of Van Camps brown beans and fried some large beef weiners. They are so juicy and good but I could only eat one. I saved the 2nd one for another day. The rest of the day was doing what we do best. Sitting in the sun and reading. Kim joined me for some quiet book time and then Bill, Keith and Ken pulled chairs up too. I’m enjoying my new book and know that I have read one of her others with the same characters.


Or was it in a movie? Hmmm. It is fun and so far a page turner. Around 3, it was time for Happy Hour and Doug and Yuma from Miss Adventure Travels drove up in their Jeep. Deb and Tom had informed us of their imminent arrival and we were all happy to see them again.

After introductions to Bob, Jo-Anne, Kim, Ken and Keith, we settled in for another long H.H. Once more, no shortage of conversation as we learned even more new things about each other. It was very nice to catch up with Doug and hear some of his stories.

It was around 5:15 or so when Keith and Bill loaded Black Beauty with their planes and left for the field again for some night flying. I knew they would be going out for a bite to eat later so was in no hurry to break up the party. Ken drove his own car to watch them and join them for supper, probably at Carl’s Jrs.

Eventually, around 6, we said goodbye to Doug and Yuma for now and planned to see them on Saturday at Bloggerfest. There were a few pictures of the pretty AZ sky before everyone made their ways into their homes. I left our back blind open so I could see Oreo outside of Keith’s unit. I felt bad leaving her out there on her own but knew she’d be fine or Keith would never have left her out. It was nicer for her than being inside on such a nice day. 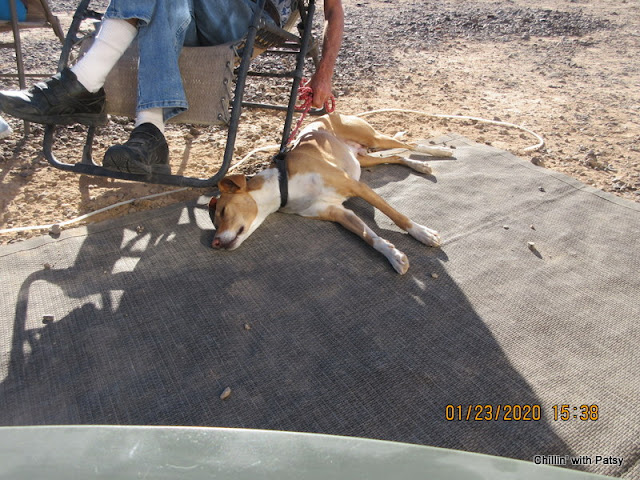 Once it got darker, I texted Bill but he told me just to leave her if she was quiet. My heart couldn’t quite get to that place of not worrying. She’s such a good dog and not a peep was heard but I worried about how long the boys may be getting home. She isn’t just a little dog; would she be easy for me to handle? (I don’t really know how easy that would be) or I would have tried to put her inside. We know how I’m not a fan of the dark and was worried about her.

Inside, I made myself a stuffed taco of chicken salad, lettuce, shredded cheese, ham and salsa for supper. It was quite tasty! I finished my meal off with some more of the keto Jell-o. Bill texted to say they had arrived at Carl’s Jr. and a reminder to plug our lights in. Then Keith put my mind at ease by saying I could put Oreo insider. She was so gentle when I walked over and she went straight to the door of her home. Up she went and as soon as I unclipped her leash, she went up to bed. 😊

Now that I’m relaxed again, I worked on my blog post and downloaded the day’s pictures. If it is difficult to publish tonight, it will be ready for the morning.

This was a great day! Sad to say goodbye to Ken and Shirley and happy to see Doug and Yuma. We are all enjoying the blessings of such nice weather in the desert, the company and the friendship of others. Each day is a bonus and we don’t take any for granted.

Posted by Patsy Irene (Chillin' with Patsy) at 7:13 AM