The Ridge
It was 6:30 when we were both waking up on Monday, May 25th and 7 when we got up. We’re not 100% what time the garbage truck comes by. Sometimes, it is after 9, sometimes after 8 and sometimes later than that. So, I knew Bill wanted a shower so I offered to take the bins and bag down to the road. Because there were 3 items, I loaded them in Ptooties and drove them down. I’m not lazy, just practical.

Then I made my tea while Bill finished up in the bathroom. While he was in there I looked out, noticing Chippy hopping across the grass. Then I noticed that my white geranium flower was laying on the ground. Oh-oh, I wondered if the stronger winds damaged it. My next question is: Does anyone want to adopt a mischievous chipmunk?? LOL.

Chippy had been busy. The geranium, cornflower and daisy plants were completely dug up and out of their holes. Hmmm. I guess the little rascal didn’t like the location. The air was blue as I went out and replanted them, this time packing large rocks around the base of each plant. I’ll fix you, I promised. I’ll water them later today as the rains are done for now. I couldn’t believe that he did that so went around and checked the lobelia and petunias. They were fine.

We finished our blog reading, drinks and clean up. I’d decided that because it was going to be a hot day, I would wear a sun dress. That makes a person (this person anyway) feel pretty. It would also be cooler than shorts and a top. My Akumal dress was the ticket. I had Cheerios, strawberries and cream and Bill had some toast.

We hopped in Ptooties after turning the fans on indoors and pulling the inner blinds down. Owen Sound was our destination, about 40 minutes’ drive. This is always a pretty drive down the country roads for the first 15 minutes and then onto Hwy #6. Bill wanted to take the back way so we didn’t have to drive through the heart of the city. That didn’t quite turn out the way we planned but it was a wonderful drive for me. Bill was kicking himself for missing a turn but I didn’t mind at all! 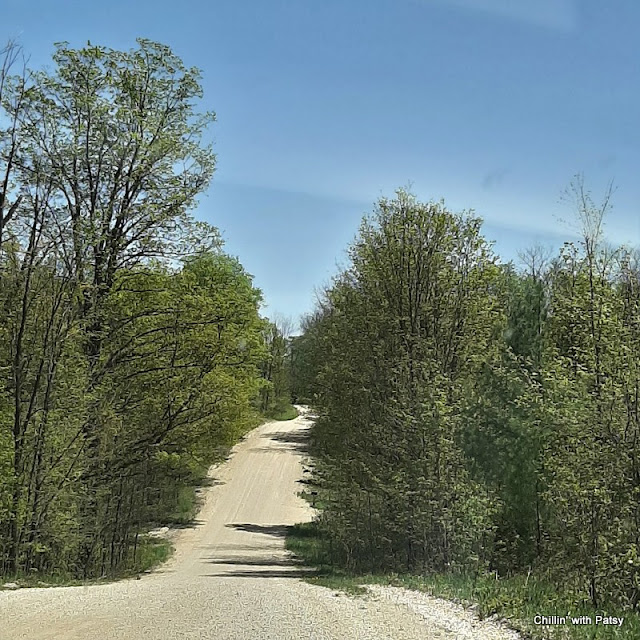 Eventually, we got back on track and arrived at Staples before 11:30. Bill had spoken to Tom on the phone but he was busy with a customer so Mike came along to help. That worked well since Mike was who our buddies recommended to speak to. I’m sure either would be fine, Tom sounded quite knowledgeable too. Bill found what he wanted and from there he asked what he needed and got the assistance he required.

We left the store and drove just to the end of the block to Pharmasave. Good, we didn’t have to go far to get Benadryl tablets and cream. We will need stock for the bites we’re dealing with now and expect in the future. I needed a greeting card so I did that at the same time. Homeward bound. We drove past the Acreage when we heard D & G were on their way out but with the gate still locked, we knew we’d beat them out there.

No worries, we were hungry and headed home for lunch since it was after 12. I quickly changed into shorts and then made our bacon and eggs. I had mine in a tortilla again and enjoyed it very much. I once more had planned on cutting the grass so Bill got the big mower out of the way in the shed and got mine out for me. Woops! We’d forgotten that we have no blade for it. That put our brains in a tizzy because we each thought that we had purchased one last fall.

I thought I'd share something
with you - waddle waddle

It was a summer day and having no choice but to put the lawn cutting on the back burner, I took my book outside to enjoy it. For some reason, after sitting outside under the awning with my book, I started to feel extremely tired. I came in to have a doze but it was too hot in the Suite. We could plug into power and turn the a/c on but Bill wasn’t feeling it quite as much and that is usually a mutual agreement. Maybe tomorrow.

I moved out to the Bunky where with the windows open and door closed, it was cooler. I rested but couldn’t doze off. After an hour, I came inside to see how Bill was making out with his laptop and we watched some tv together. The problem with the heat is that we never feel like eating properly. I was about to start getting Madame IP out when Bill said he didn’t feel like a big meal again. Of course, I’m hungry but at this stage, anything will do.

We decided on wieners and beans, the poor man’s meal, so at 6:30 I started cooking. After dishes, we took a drive into Durham for a short visit with Rob and Pat and were headed home just after 8:30. It is always nice to see them. The Suite had cooled down inside as had the outside temperature. It got up to a sizzling 28C/82F up here today and the winds were minimal for the most part with the odd gusts now and then. We had the awnings out all afternoon.

This was a good day, very summer-like and this is what we’ll have for a couple more days. I hope you’ve enjoyed yours too.