Filling Our Days, Enjoying My Special Day with My Number One

We don’t look as forward to our birthdays when we’re older as we do as children. That’s a given. However, when I woke up on Wednesday, Sept. 23rd at 6:30, the first words I heard were "Happy Birthday, Sweetie". 😊 I rolled over to see the smiling face of my world. That’s worth waking up to right there, no matter what age. Today is the day my number changes but I don’t feel any older and I think that is the main thing. Bring it on!

We showered and then had our coffee and tea together biding our time until Todd reported to work. Plans for the day were still up in the air, depending on what got finished and when. It was the perfect time to open my birthday cards and gift from Brenda. She gave me a true story novel and a dainty beaded scarf. I love them both and started the book today. It’s called The Dressmaker of Khair Khana by Gayle Tzemach Lemmon and I think I’m going to enjoy this story.

Texts and FB messages were coming in randomly so I made sure to answer those birthday wishes. Yes, I opened Mitch’s card and it was typical and cute. He also included a $66 cash bonus to honour my age. 😊 As instructed, I called to thank him for his thoughtfulness. The birthday cards were either hand delivered or mailed by snail mail and are all appreciated. A phone call from my daughter by 7:30 shows she was on the ball nice and early.

I hadn’t started Tuesday’s blog post so did that while sitting at my laptop. These last few days, here in London, have passed by quickly enough but today might be more of a challenge. First thing, well by 10:30, the work that Todd could do here at the farm shop was done. We hooked up to the Suite and headed back to the main shop to get the brakes looked at. It isn't as convenient to take a chair and sit outside at such a busy location. It's a busy highway so even walking puts me on edge.

Peggy, our Service Manager, has things under control in her office and asked us to drop the Suite out front and we could go about our day. They would move it in the shop with their tractor and check things out. Bill and I left around 11 and took a drive to St. Thomas. We were curious where Bill’s friends (one of Mike’s customers) were going to be setting up a new pizza place. He knew the address but there was no one around when we arrived. It was a nice drive all the same and, on the way, back into London, he took me to Denny’s for lunch. 👏 I love Denny's meals.

I had a delicious 55+ Omelette, jam-packed with veggies, bacon and ham, with hash browns and rye toast. It was wonderful! Just the right amount of food. From there we drove to AVF, the hobby store we frequent for airplane hobby parts and Bill went in and bought a couple of small things and chatted with Bobby. Before he left, he’d found something else that he was going to order online and have shipped in. It wouldn’t be an instant purchase so it made sense to buy it local, from someone he knew and save himself shipping.

It was too early to return to CanAm so we went back out to the flying field and Bill was able to work on his plane, where some covering got damaged. I sat with the new book and read. It might be a hard read with all the unfamiliar words but I'm hoping the story is worth it. This weather is absolutely amazing! 25C/77F and clear blue skies. At 3:30 we drove back to find our Suite sitting out front. This could be good news. Peggy gave us the run down and said that they checked the brakes, pads and rotors to find that there was no need to have any of them replaced. Woohoo! That was one thing we thought we’d be paying for. That’s a nice surprise.

For the night, Dave used the tractor to tuck us lickety-split into the same spot at the front of the building where we plugged in and settled to relax. Bill did some banking and I wrote what I could of today’s post.

Because it was my day, I poured myself an icy Caesar rather than making a cup of tea. We’ll be out of here tomorrow morning so I wrote up a Costco grocery list of what we need to pick up before leaving London. We’ll do that when it opens and then come back and hook up for the trip home.

We discussed supper plans; everyone asks “are you going somewhere special?” The answer is no. We don’t need ‘special’  ($$$$) to celebrate so it will likely be a place we love and don’t get to often ($$). First choice was Pizza Hut but when I read that they aren’t offering ‘dine-in’ we said “Forget that!” So, we drove to a familiar haunt that we frequented almost every payday when we worked in London. Never disappointing, Southside Family Grill welcomed us inside.

Bill and I both had seniors’ fish and chips and when it arrived with an overload of vegetables, I boxed those up and brought them home. Bill doesn’t like the broccoli, carrot and cauliflower combination but I do so will eat them this week. The senior’s meal came with rice pudding so we each had that rather than Jell-o. It was very filling even though I hardly had any of the fries. I enjoyed my birthday supper very much with Bill. 😊 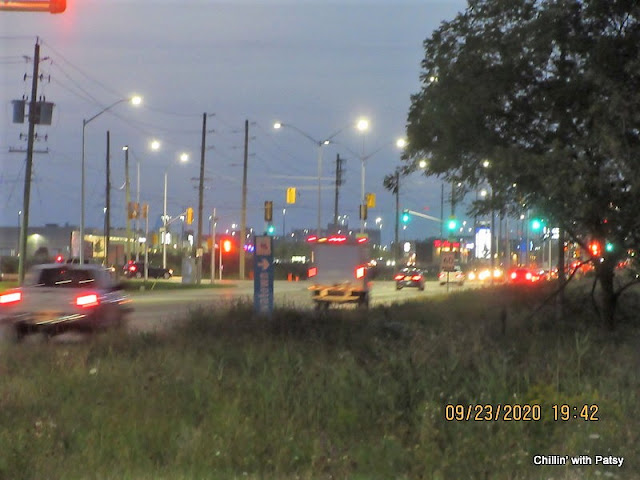 Back home, I felt zonked and I’m not sure why. The day was long and draggy so that was likely the reason. It was an early bedtime for me and warm upstairs so I opened my window and dropped off the instant my head hit the pillow. A wonderful day!

Thank you for stopping in. Our Suite is done, for this trip, we’re going home tomorrow. 😊

Posted by Patsy Irene (Chillin' with Patsy) at 6:11 AM