Our Cooler Weather Arrives, I Finally Got a Walk In!

Last night, I went up to bed at 9 as Bill was into his classic car shows. I found the Movie Coal Miner’s Daughter and watched it with Sissy Spacek and Tommy Lee Jones. That was a good ‘before bed movie’. That meant it was 11 when I rolled over to sleep. Bill was up to bed soon after. Today, Tuesday, Sept. 29th he was up and washed when I fully came awake. I joined him downstairs before 7 and saw him off to work.

They have some outside work to finish this morning and then maybe some indoor stuff. The weather is iffy this week with more rain in the forecast so they will have to work (or not work) according to what we actually get. At 7:30, I’d finished my tea and blog reading, I bundled up a bit (it’s so hard to know how to dress on a windy 11C/52F morning) and went for a walk. Once I got on the road, I was glad I did as it has been quite a while since I’ve got out there for a nice walk. 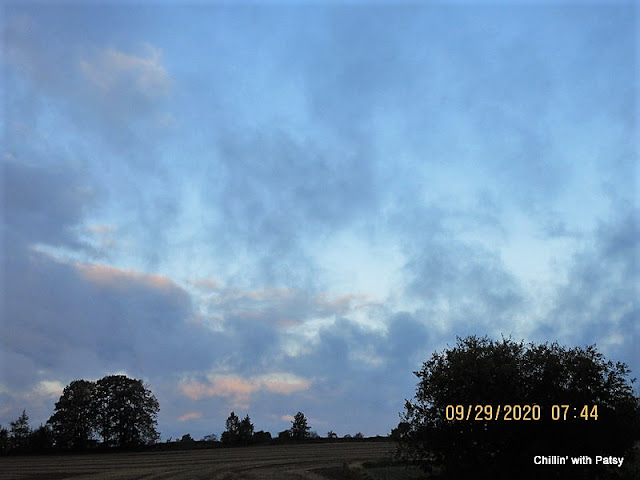 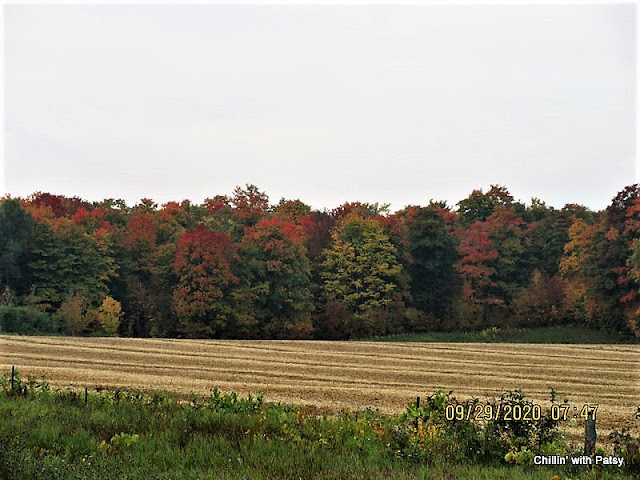 No special sightings other than this chubby character down by the dock area. I believed it was a raccoon but it was hard to tell by the time I got my camera zoom set. He wasn’t there by the time I got to the end of the lane. My picture confirms what I thought.

I sat inside for the half hour before work and read emails and played some online games. ScrabbleGo replaced Scrabble but it can only be played on our mobile phones. It is better than nothing so I have a few opponents, including a cousin-in-law and a friend from Arizona.

It’s a dull day out there with a sky full of gray clouds. I assume that means I’ll be working inside today or running errands for Mitch. When I arrived, I worked on hand sanding and then taping for an hour before going into town for an hour. Errands. 😊 It gave me an opportunity to pick up Bill’s prescription while there so why would I complain? The last hour of work was taping to prepare for painting. That means another pick up truck, seems to be our main business, is soon out the door.

Back home at noon, there were brief patches of blue sky showing but the temperature didn’t get much above 14C/57F all day. Still not bad at all as it remained dry and outside work was possible. If I wanted to do that. LOL After lunch, I washed the dishes and then received a phone call from an rv resort in Vancouver, B.C. I’d called over a month ago to see about a site and what their rates were. That was when we were in panic mode. She had a site for us but it’s too late, I told her, we’ve moved on. Maybe a couple of weeks ago, we’d have considered it.

When I was talking to her on the phone, I looked out and saw my sweetie walking up to the door. I didn’t even hear him drive in. It was only 1:30 so I was pleasantly surprised to see him. They’d gone as far as they could at a couple of job sites so rather than start a new one, took the afternoon off for things to dry and set. He informed me that the mailbox flag was up so I could take a walk down to get it. He knows better than to collect it. 😊

It wasn’t important, just a TSC flyer but the walk is always nice. Soon, I will be bundling up a lot more to collect mail! We will be forwarding our mail to Paisley this winter, instead of to Donna’s, so will get a walk out of collecting the mail as often as I want. After Bill had a snooze, he took the water bladder over to the Acreage for a fill up. We were getting low. While he was gone, I delved into my next book.

Michael Connelly’s The Brass Verdict was one that Bill had read on my Kobo but I hadn’t yet. Now I can read it in hard copy instead, which still is my preference. As is typical with a Harry Bosch/Mickey Haller story, I was into the 6th chapter almost immediately. I love his stories. The last book, The Dressmaker…was different, an interesting true story, but I still prefer these detective type mysteries for a quick read.

With the water hooked up and being transferred, Bill went down to the Hangar to work on his Corsair and I made myself a tea and turned on my Animal shows. Dr. Oakley, Yukon Vet on the Ntl. Geographic channel is a favourite. Pigs, porcupines, reindeer, dogs, cockatiels, guinea pigs – oh my! 😊 For supper, tonight, sausage patties and fries. I steamed a bit of cauliflower with mine. Needless to say, supper, topped off with a banana split, was great!

We did the dishes and just enjoyed the evening together. It was another good day. Was yours? We will be experiencing a low of 7C/45F tonight so will leave the fireplace on low. We can do that now!