Goodbye Suite, Hopefully – Out of Sight, Out of Mind, Hello Costco!

Friday, Oct. 23rd we were up with the birds, wait a minute! We were up before the birds. Anyway, it was before the 6th hour that we crawled out of bed. I just needed a quick wash because of last night’s shower, (which helped me sleep wonderfully!) but Bill needed more than that.

We went downstairs and I had a cup of tea and Bill had some cereal. Gee, I sure don’t feel like eating at that time of the morning even if I thought it a good idea. Wes was in their office on his computer and said good morning so as not to scare us. It is right off the big kitchen where we sit to eat. He is an early riser too and sits in the dark with only the light from his desktop.  We were ready to go and pulled out in Black Beauty at 7 am as planned.

The drive to the Ridge was in partial darkness to start and then partial clear skies with  interesting clouds. The sun was trying to peep through. By the time we reached North Line, the sun was rising above those clouds beautifully.

The Suite was ready for us, meaning all closed up, so all we had to do was hook up and go. I shouldn’t tell you this but I had to resort to an old ‘camping’ habit of yore while up there. The outhouse was closed up, the Suite had no water in it so you can guess what I mean. I had to!! Nature called!😊 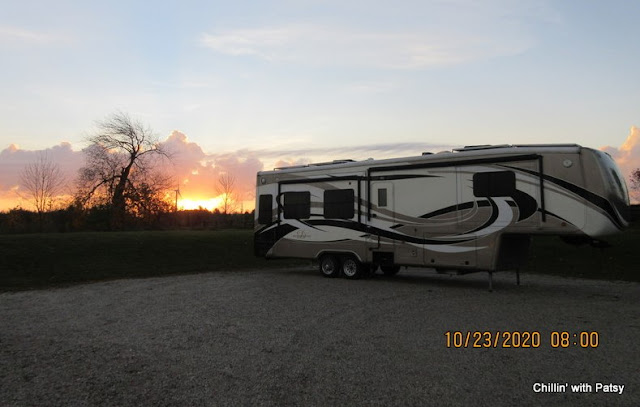 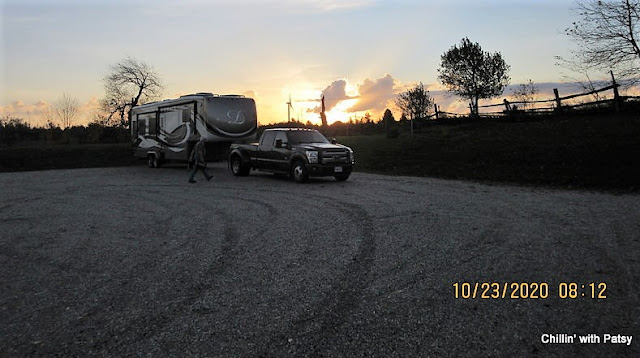 There were a few things to do to ‘tidy’ the Ridge up but I decided to leave the last 3 geranium plants hanging since they were still blooming. No harm done if they ended up on the ground since they are just plastic hanging pots. I hate to stunt any more flowering before they're ready. We were pulling out of the laneway, with the big steel gate closed behind us at 8:30. The sky was still mostly clear with just light fluffy clouds most of the trip. It was a gorgeous day! 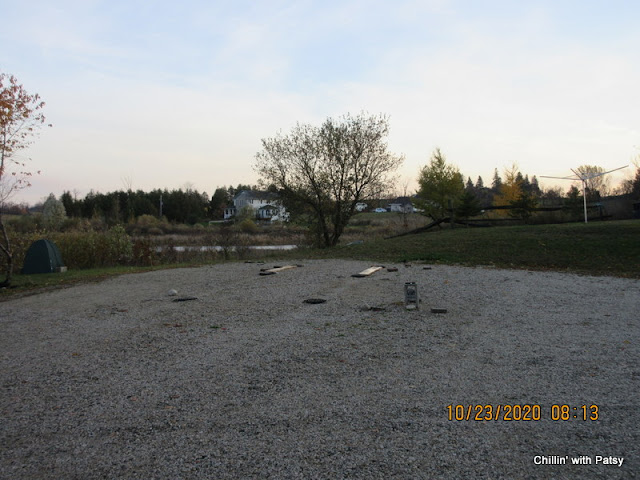 We didn’t need to stop until we reached our destination 2 ½ hours later. It was excellent time for us pulling the rv and sticking to 90km/hour. We arrived at CanAm at 11 am. Peggy was prepared for us and we received a lot of condolence greetings. Peggy has also just lost her Grandma with the funeral yesterday at the same Funeral Home as Mom. Small world, huh? She was sad too but still on the job today. We dropped the Suite and Dave quickly moved it back out of the way. It will sit for a week before workers get in it.

From CanAm we drove to Costco, southwest London, and picked up the things we needed. No over spending here today, which was nice, especially because we were pretty well stocked up plus we don’t have a lot of room for much more. Ha ha! After Costco, we drove the short distance to our old restaurant haunt, Southside Family Grill for lunch. I ordered the Denver omelette special which came with home fries and toast. Yummy! The only thing missing was cheese. Bill had one of his favs, a clubhouse with fries and salad.

We left there quite sated and I had a little box of home fries and rye toast to bring home for tomorrow. That was all of our dealings in London so we headed home at 1:30ish and after swapping out the driving responsibility an hour from home, we arrived at Lilyfield at 4 pm. By the time we unloaded and found niches for all of the food items in cupboards and fridge, we settled upstairs at our laptops. Wes and Susan weren’t home but we didn’t think they’d be long.

At 4:45 after receiving an Emergency Alert on our phones of tornado watch, the storm hit. Looking out the bedroom window we were so glad not to be out in it but were somewhat worried about our hosts. Then we thought how lucky we were not to be up on the Ridge tonight in the Suite. It didn’t last long and by 5, the winds had calmed significantly even though the thunder and rain continued for another little while. We still have a lot to learn here, especially when we are alone in the house. Candles? 12v power switches? Etc.

I poured a Zero Coke for Bill and I made myself a cup of tea. I wasn’t going to get into any ‘business’ tonight but tomorrow will do some of the paperwork. Plus, there are still boxes to empty and items to be sorted in a more organized fashion. Wes and Susan made it home safe and sound by 5:30 and proceeded to make their supper. Bill and I weren’t that hungry after such a large lunch early afternoon but around 6:30 we had some cheese and crackers to get something in our tummies before the evening got too late.

We watched some NCIS on the kitchen tv and I read my book in the front living room. At 8, I joined Bill upstairs and we skipped watching tv in the big room tonight. That is the one thing that may be awkward this winter. We all like different things and have different habits. I mentioned reading this book The Little Red Chairs but I’m having a hard time getting ‘into’ it. Parts of it are interesting but for the most part, at 85 pages, I’m thinking it isn’t worth my time. Maybe I’m just not focusing on it enough right now.

It was an early evening for us, even Bill was in bed at 9.  I read a chapter and turned the light off. It’s been another long day and with the beautiful temperature of 25C/76F in London, it was great. I hope you’ve enjoyed your Friday!

Thanks for popping by!

Posted by Patsy Irene (Chillin' with Patsy) at 7:45 AM