Well, I’ll Be, Another Blue Sky! Waking up in a Bed by Myself

Today, Monday, July 31st I woke up at 7 with more sunshine peeking around the pulled shades. Other than that, I woke noticing that Clemson and I were in bed by ourselves. Oh yes, now I remember. I do recall waking at 2:45 and checking the clock, Bill was still asleep beside me. Then again at 3:30 and he was gone. I never heard him get up at all.

After letting Clem out and realizing what a beautiful morning it was I made the bed and opened things up including the outside door. I have received a couple of annoying bug bites in the last day or two so dabbed them with Benadryl cream to take the itch away. I made my tea and sat here reading blog posts from yesterday. It is so peaceful up here.

I am debating whether to go into Durham to do a laundry today or wait until another day. With the sky so clear, I shouldn’t miss an opportunity so loaded up the basket. Debate over, that was easy! I was the first and only customer at the Laundromat this morning a 9 and out of there with 3 loads of damp clothes and towels by 9:30.
Before leaving Durham I stopped at Foodland to pick up the yogourt that Independent didn’t have and a few other goodies. When I got home, I made myself another tea before hanging the laundry on the line. I could tell they would dry quickly. It was about 10:30 that I started making up a couple of pies. I’ve  made a promise and won’t renege.
We haven’t plugged into electric for a few days now and I hate to do it when the sky is producing such wonderful solar. So they can wait until later this evening or in the morning around 7, even better. I took a walk down the lane with Clemson to get the mail just around 1:15.
We walked the road a bit to the neighbour’s lane before turning around. I was happy to see that I finally received the FREE DNA kit from My Heritage. I had won it after entering a Father’s Day contest back in June. Next week I will open it and see what is involved in sending it off. 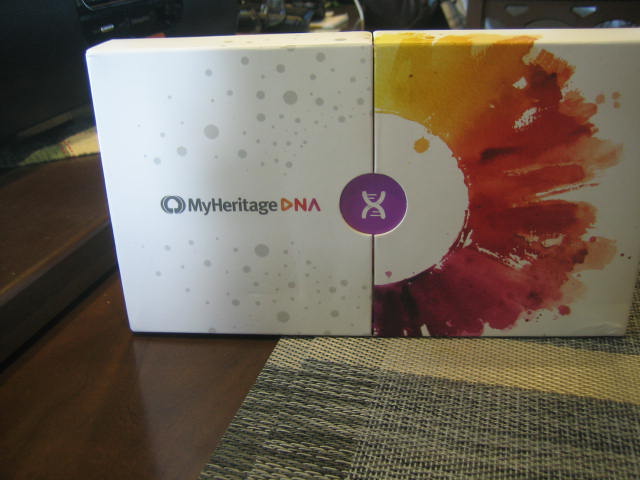 I no sooner got up the lane to the corral and I heard and then saw Gerry and Melinda pulling into our place. Yay! We haven’t seen these two since February. George hopped in his car to move it out of the way and I went to give Gerry some directions on how to proceed in turning his 24’ travel trailer around. Bill had left the best way to do with the least amount of finagling. Within minutes they had pulled in between George’s motor home and our fifth wheel. I unplugged the cord from our Suite and we got them hooked into power.


Without solar panels, they would have to run their generator when their batteries ran low. This way, if we need a power burst (to bake my pies, for eg.) I can unplug them for the necessary amount of time at 7 in the morning and then hook them up again. How great it is to see them. We’ve only known these two since December but we’ve hit it off really well. We picked up where we left off easily. Even Tucker and Clemson got along. Being off leash is a bonus for these little munchkins. 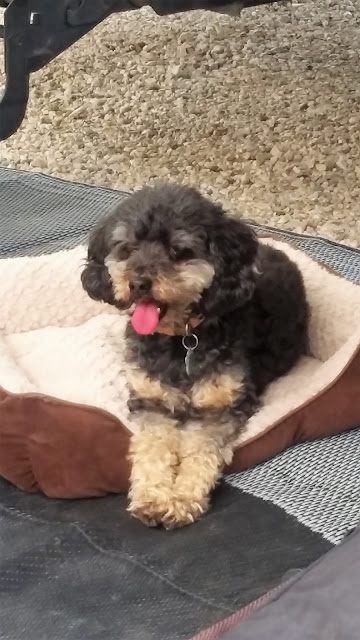 I brought the last of my clothes in and put them away. Thank heavens for the breeze today, I was really melting in the heat for some reason. I guess keeping on the move for the most part did me in today. I heard from Bill as he was leaving London advising me of his eta. At 3 or so we took our chairs over to the newest arrivals for Happy Hour. 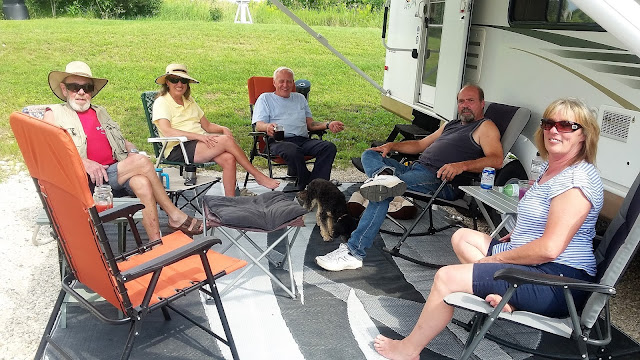 Bill arrived around 4 and the conversation continued as he filled us in on his disappointing day. We all agreed that it has been a great weather day but we also agreed that the ‘storm’ we experienced today was the weirdest one we’ve ever witnessed. Blue sky with white fluffy clouds to the west, south and above us but off to the north it was getting darker with thunder.

No wind changes although the temperature did drop a bit (thankfully) and then the lightening appeared all over the sky and some really loud cracks of thunder. This went on all around us and overhead for about 45 minutes. No rain fell and we never put our awnings in because of it. Strange stuff but it was only because of the dinner hour that we split and went our separate ways to prepare meals.
Bill had eaten late this afternoon, mainly because of rising at 3 and not getting anything to eat earlier. This meant he wasn’t hungry for supper so I fried up some leftover sausage with a few chicken hearts and had that with potato and lettuce salad on the side. It worked well but we know who will be munching later.

I’m sitting outside and you’d think the rain was coming because of the way the flies are biting (or trying to). The wind has died completely and with the exception of one big fluffy gray cloud the sky is quite pretty for this last evening in July. I had to give in and move back inside to finish this post. I need both hands to type so one hand cannot be slapping critters. 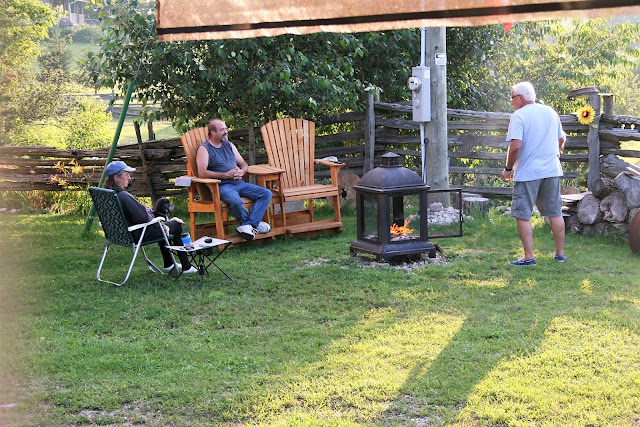 Bill had roused himself and gone outside to start a fire in the pit. This is the reunion of most of the Rock Glen Rabble Rousers with the exception of Rob and Pat. They will join us tomorrow to make this unit complete. I think George aptly called this the Rock Glen North group.
I need to do some more work on this sharp tooth. Some days it is less noticeable and this afternoon it seems sharp again. I tried filing it a bit with a piece of my emery board and it worked a bit. I don’t have a dentist up here, yet, and to drive to London for something so minor doesn’t make sense to me. It isn’t an emergency. We’ll see how long I can take this.
I’ve cleaned up dishes and Bill has set up the pvr to record my show at 8 so we can go outside and enjoy our friends’ company. I hope you’ve had a great day today, I know I have!
Thank you for reading along. I’d love to hear your comments if you have the time to leave one.
Posted by Patsy Irene (Chillin' with Patsy) at 7:22 PM