On Saturday, Nov. 26th we woke to another lovely morning. It was only 41F/5C again but there was no, if any, breeze to speak of. Perfect! I wear capris and loafers with no socks but make sure to layer up on my upper body. Gibbs said ‘no’ when I asked if he needed his coat too. 😊

We went in the same direction, to the south, as yesterday and Gibbs did the same thing. Not only did the brakes come on, this time all 4 cylinders clicked off. It’s almost like he hears something or smells something that he doesn’t like and turns for home. Once we’re back at camp, he wants to wander around, sniffing and smelling things so he has me totally baffled. Tomorrow, we’ll try north. 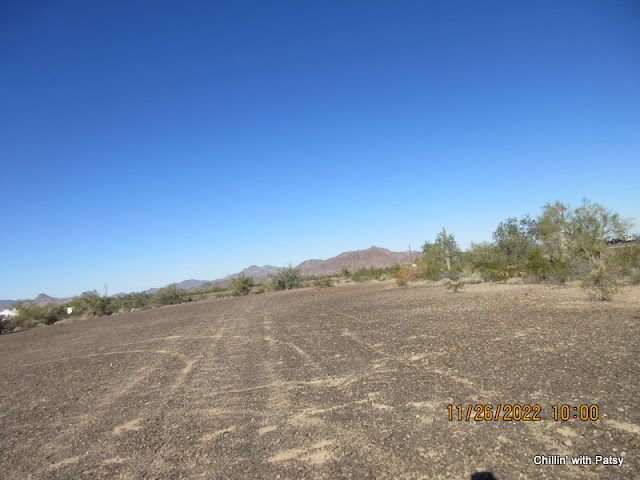 Because Bill was up too, he has morning plans, I stayed home and had my tea and oatmeal with him. I’m not one for cold pizza in the morning, shudder, like some of you, so warmed my breakfast for a few seconds. Bill was heading to the flying field this morning to see the guys. He wasn’t sure if he’d fly but he had his planes with him regardless. He left between 8:30 and 9, I think. It was so calm, his friends should be there. 😊

At 10 to 10, I left Gibbs at home and headed north for my walk. I now have an incentive. After hearing and reading about Deb and Doug’s walks, although I am not interested in ‘hiking upwards’, I was encouraged to try and increase my daily steps as well. I’ve not been doing well since we left home as far as reaching any goals. So, I walked for 50 minutes and it was very quiet, even at that time.

I see a lot of flat open camping areas down the road from us but I’ll bet come January, they will be full too. Even December picks up a lot. I walked the back roads and when I crossed over to the main road, I was almost at the entrance office. I walked part way back along that road, past the dump for Blue Boys and cut back across between the big rig water and dump stations. I was still shy of 5,000 steps so planned a later outing.

I changed into fewer clothes, as it was, I had taken 2 layers off on my way back, and sat outside in the sun with Gibbs. I had a call from my sister Gayle, in Florida, and with John, we had a nice little catch up chat. We will see them before they cross into Mexico in January. The sun was hot at 68F/20C, much hotter than what the brings us back home. It’s perfect to me!

Bill returned home before lunch and after sitting together for a while, I made us bacon and eggs. We were outside and inside at different times, finished books and started new ones. I’m reading a Tami Hoag book now. Cold, Cold Heart. It grabs you in the Prologue so shouldn’t take long to read. It is a hardcover book, which I like, as the print is a bit larger. Not that I’m getting old or anything! Hahaha.

I took Gibbs for another walk around 4 in the opposite direction. We didn't get too far again and the lazy little bum stopped again. LOL Not sure what it is. Maybe a protest to his leash? Maybe he misses the Ridge! 😂👀 I did manage to come close to 8,000 steps today so that is a huge improvement. Thank you friends!

Supper was grilled bacon cheese burgers with toasted buns on the Weber as well. They were awesome, again. I had no dessert planned but we both felt plenty full anyway. ♥

This has been another great day out here. When there is no wind, we have no complaints. The overnights drop to the mid 40’s, around 7C, but the days heat up really quickly. Bill’s flying friends couldn’t get over him being in shorts and a t-shirt this morning. It was 50F/10C but to us, pretty darn nice!

I spent the evening with my blog post and book. Bill and Gibbs are currently upstairs with the tv on. We’ve lost a few, more than a few, channels that we watch regularly so my sweetie is quite disappointed. Something has definitely happened to our Shaw provider since we aren’t the only Canadians experiencing this. ☹

Posted by Patsy Irene (Chillin' with Patsy) at 8:32 PM No comments:

A Beauty of a Day, Company and Dinner Out

On Black Friday, Nov. 25th Bill and I weren’t interested in any shopping deals. Our travel month is usually the hardest month for us as far as having cash flow. So, we tend to limit our spending after paying for the fuel to get down here. It was a chilly 42F/6C this morning when I took Gibbs out for our walk at 7:45. Yet, at that temperature with no breeze, it felt warmer than yesterday’s 50F/10C in those strong winds. 😉

We walked down the road to the south and then he stopped. I told Bill that he didn’t just put his brakes on, he put his emergency brakes on. “What?”, I asked. He turned on his heel and headed for home. I dropped him off with Bill and I headed back out again for a longer walk. The sun felt wonderful and I was toasty warm in my new jacket. I walked down to where we parked last January and then east to the main road in before heading north up towards the water and dump station.

I saw that the water had been turned on so cut through there and headed back home from the opposite direction. I told Bill about the water and soon he went up to get another bladder full. Now, there will be NO skimping while we’re here. 😊 We had our tea and debated going into town for propane for the Weber and gas for the genny but decided to wait until after we ate.

We had made plans to join Deb, Riley and Doug for mid afternoon pizza at Silly Al’s. Yay! First, they came here at 1 for a visit. It is always so nice to re-connect with our friends down here, whether we’ve met with them each year or not. In the case of Deb and Riley, it has been 4 years since we’ve seen them! We did see Doug on our last trip down here but that doesn’t lessen the importance of seeing him again. 😊

It was a great catchup here in the heat of the afternoon sun and the chat continued over great pizza. Deb and Riley had never been there before. I do believe they loved it too. Doug, thank you again for the pizza and to Deb for suggesting the outing! After going our separate ways, we got our propane at the Pit Stop and fuel at the Arco out on N. Riggles Ave. The price was good for gas but really good to see for diesel.

Back home, we sat outside with Gibbs for a bit but the air sure cooled down when the sun dipped behind the wispy clouds. I knew it would be a good sunset tonight because of those clouds and was not disappointed. I made a tea inside and Bill and Gibbs had a nap. No cooking tonight but we plan on a snack around 7 if we need something light. This has been an awesome day. The winds were almost non-existent and seeing our friends was the highlight. ♥

Thank you for stopping in. We had a quiet evening with our books.