Another few days and another discovery or two.

Now I said that I have a couple of options each day, which way to walk. There is no snow on the sidewalk now..........yet, so depending on my mood I will make a choice. Again on the flat route, I pass a couple of bus stops. I've never had need to take a city bus but once in my life and that was many moons ago bb (before Bill) in the dead of winter in -32C (not kidding!) temps. Don't care to do it again but I would if I had to.

It wasn't long into my new treks that I started to notice a pizza box, Tim Hortons' cups, water bottles at this one particular stop. I shouldn't worry about increasing garbage around a stop that probably has the same patrons day in and day out. If they don't care what they are walking in, why do I? 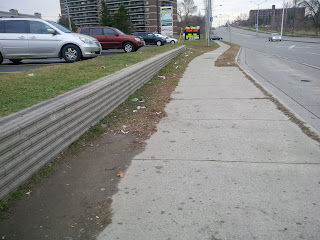 But I do. It is all I can do to NOT bring a garbage bag with me and clean up the area. Except I'd need to bring a rake along as well. Come on people!!! Today I took a picture, I'm so disgusted that it just keeps piling up, worse every day. Now food is added to the pile, gum and cigarette packets.

The stop is in front of a small strip mall with a Service Ontario depot, hair salon, aquarium store and restaurant among the businesses. Granted it isn't 'their' mess or concern but wouldn't you think a city this large OR a business owner in this space would feel inclined to help clean up the area?

At least  chaining a garbage can to this sign would seem like a good start, don't you think? How difficult would it be to replace a garbage bag on occasion?

Now I'm ranting, but all this whining/discussing/meeting about what we can do to improve bus service, city streets etc. etc. for the 'poor' riders this sure doesn't make me think we/they deserve it. This is a main thoroughfare, a 4 lane street that runs directly through the city from the east to the west, the street our hospital is on with close access to the 401 series highways. So, yes visitors come through here all the time. I'm so proud.....NOT!

Just a side note, many of these people ride the bus by choice not necessarily need but the garbage buildup isn't because they are of any particular class. (Actually they have NO class in my opinion) The ones tossing garbage can afford to eat pizza and Tim Hortons but obviously have no pride in their city.

I have a solution to this but it means that the multi-millionaire dollar conglomerate would need to take on an extra task. Since 85% of the garbage is Timmys' cast offs, how about they start to offer a .25 refund off your next cup IF you return the cup? Everybody loves a savings and perhaps there wouldn't be so many left on the streetside. Someone would gratefully gather them up and return them, not for reuse but for the environment, T.H. can recycle the cardboard, and another cuppa is sold!

I found this little tidbit article just before hitting publish: 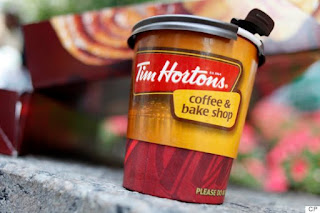 Its Cups are The Most Recognizable Litter in Canada
Odds are,  if you look into a garbage can anywhere in Canada, you’ll see at least one Tim Hortons cup.

I guess that would be better than under our feet?? Or not!

Thanks for listening and reading. Maybe when I'm retired I'll go clean up this area. LOL

Posted by Patsy Irene (Chillin' with Patsy) at 8:37 AM