Wash and Triple Rinse Please, Visit with Mom, Little Bit of Country and a Birthday

I always peek under my bedroom blind and there is either a spike in my heart rate or a groan that escapes my lips. Blue sky or clouds and rain. Today, a groan. I had sorted the dirty clothes yesterday and was all hyped to head into town this morning to do a couple of loads of laundry. When we checked the weather and saw that it would be warm, a slight wind and cloudy until noon, I loaded the car and headed in about 9.

When I walked in only Darlene was there. She is Stan’s wife and now the owner, with her 3 children, of the laundromat in Durham. This is the first time I’ve seen her since hearing the news of Stan’s passing. My heart immediately swelled at this lady’s courage and strength. I expressed my condolences and we hugged. Mind you, I have only met/seen Darlene a couple of times before.

I was holding my own until she uttered the words “I don’t know what it was, but Stan felt an instant connection with you”. Oh, my, goodness. After thanking her for saying something so kind, I turned away to hide the water forming in my eyes. I said that I felt the same way, Stan was present every day I arrived at the laundromat and we chatted about life. She asked my name again and where we were residing and when I left, she called out the back door to me “Goodbye Pat!”


I’m not ashamed to admit that I got teary-eyed for the loss all over again on my drive home to the Suite. How can someone be so strong after losing your main focus in life? I admire her even though I’m sure in the privacy of her own home, she is in a different state. I’m sure I’ll see her again and often over the next two months. I hope so.

Looking at the sky as I pull into our lane I’m shaking my head. LOL this is not a day to dry laundry outside. Oh well, it is what it is and they will eventually dry by the end of today. The sun is expected by midafternoon and I’m a glass half full kind of person. Bill was working in the basement again when I drove in and had the tv playing the only station he could get. Our antenna is in the flat position right now so he wasn’t expecting any more than that. 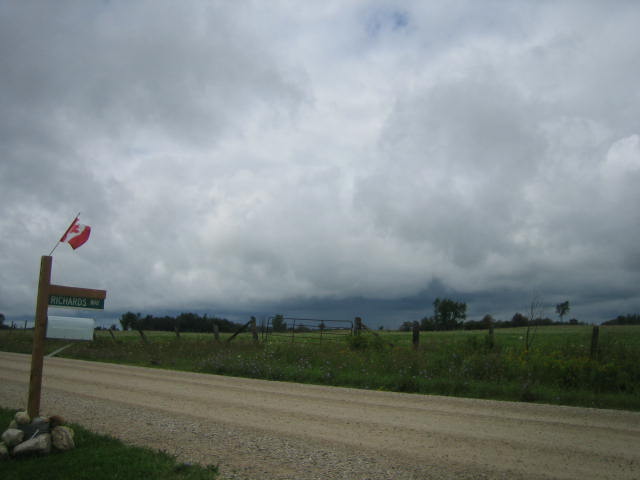 We came in and both watched our clothes get a second rinse out there on the line. That might not be the last but at least it hasn’t been a downpour, just light steady showers. I’d decided not to worry about it and set about making us bacon and eggs for lunch.

After eating Bill and I played 2 games of Scrabble, each winning one. I also sorted through the freezer, making a mental note of what food is in there. I pulled a package of ground beef out for supper.
I got cleaned up for an afternoon visit with Mom and sat with Clemson and my book for half hour. There is a country band called Born Country entertaining the residents and families of Rockwood at 2:30 and I want to share that with Mom. When I arrived, I went straight to Mom’s floor and gave her hemmed navy pants to one of the girls to put her name in them.

I didn’t expect her to be in her room as it was 2:15 but placed the framed picture on her dresser. I signed her board so she’ll see that she had a visitor today even if she doesn’t remember. We all do that when we visit, with the date. I went down to the auditorium and found her just as I knew I would.
She was sitting beside who I think is a different Jane than the one she dines with. Aunt Mary was on the other side of her and Sally, Mary’s roommate all there together in the back row. The room was filling up and the music had begun early which is nice when there are so many residents waiting. I greeted Aunt Mary as I walked by to Mom who got up and gave me a hug.
A nice lady on the other side of Mom got up and brought me a chair to sit beside her. Mom does get excited with visitors so it took a bit before she settled down and stopped talking. I don’t want her to be a distraction for others. Soon enough she was tapping and singing along to the old tunes. It was great!
The four-piece band did very well, they were entertaining and I got Mom up for a dance to Crystal Chandelier. She enjoyed herself and was soon back up with Sally, both tripping a bit over each other but having a ball. One of the staff crept in to take a picture of Mom and I dancing to the last song, You Are My Sunshine. 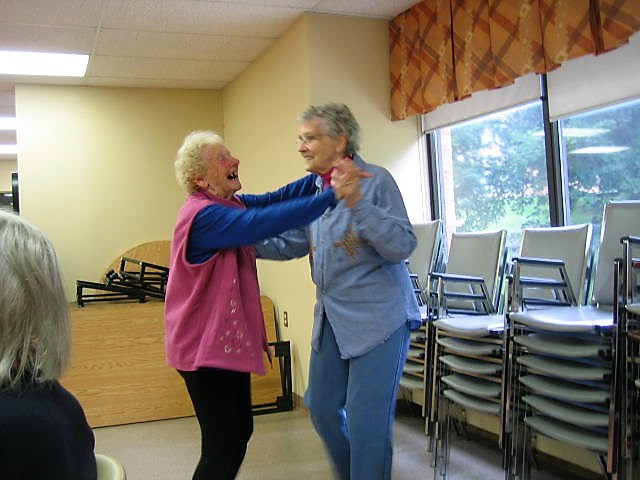 I walked her back up to her room and although she seemed confused as to why I was leaving, a mention of my clothes hanging on the line in the rain helped her to understand my need to say goodbye. She walked me to the elevator throwing kisses until the doors closed. She said she felt like wandering so I hope she found it back to her room. LOL
When I came home Bill said it had rained off and on 3 or 4 times so I checked the clothes. They weren’t soaking wet but obviously they needed to stay out there until the sun appeared. Finally, at 6 o’clock while I was preparing our spaghetti supper it pushed the clouds completely out of the way. After cleanup Bill offered to do the dishes while I brought the clothes in. In 45 minutes they were dry, inside and put away.

I’m sitting here putting my post together listening to Sirius radio 60’s on 6. How nice when you know every single song! It is my favourite station. Bobby Darin, Paul Revere, Rolling Stones, Beatles, Everly Brothers, Lovin’ Spoonful and so on. Great tunes, a great decade for music for sure. I can tell that Bill will be finishing his book tonight, he is having a hard time putting it down.
I hope you have had a great day. No matter the weather, I had a wonderful one, fun with Mom, a couple of dances, the laundry got done and Bill and I spent some quality time together too.

Thank you for stopping by today. I love hearing from your if you have time.
Posted by Patsy Irene (Chillin' with Patsy) at 6:23 PM