Another Day of Work, Clem Gets a Haircut, Mom Visit, Lazy Afternoon

Tuesday, Aug. 29th I heard the alarm go off but Bill immediately shut it off so I was back in sleep land without a twitch. Next thing I recall was at 6 when he turned on one of the softer bedroom lights to get dressed. He kissed me goodbye, loaded his stuff, made his coffee for the road and was gone. I snuggled down in the covers, Clem had already deserted the bed, and dozed until 7 when I got up too.
It is a cloudy sky but a warm start to the day at 15C. We didn’t get any of the overnight rain and that is when it would be totally welcome! I made my tea and went online to see my LifeLab results from yesterday’s bloodwork. A lot of it doesn’t make sense but I can understand some at least. I wanted to compare it to my last one from October 2015.


I was pleased to see that even though there were no issues at that time with a couple of HI flags in the urinalysis section, things had improved even more. I then went to an explanation page to research what some of the other results mean. I love this capability of being able to see our results instead of never hearing unless it was bad news.

At 9:15 Clemson and I went into Durham to the Bath & Biscuit on Main St. (Garafraxa) for his appointment at 9:30. She said ‘come back at 11’ so I put his leash in the truck, parked on the south shady side, and got my purse. From there I walked the 15 minutes to Rockwood Terrace on Saddler St. to see Mom. She was in her room reading through one of the family books that my sister Wendy made.
Pleased to see me and in a good mood, we had a nice visit. She had a few articles of clothing on her bed which gave me the indication she didn’t know what to wear this morning. I hung them up on hangers and moved the really heavy sweaters to one end so she doesn’t just grab them out of habit. I know she likes her sweaters, no matter how warm her room is to us, so left her new blue cardigan out for her when she goes for lunch.

At 10:40 as I was preparing to leave the fire alarm went off and a staff came and closed our door telling us it was a test only. I hoped it didn’t take too long as I’d wanted to leave to walk back and get Clemmy. The goodbye, after they came and opened the door, was rushed to say the least but Mom walked me to the elevators with multiple kisses and hugs.

I put the walk into a higher gear so I wouldn’t be late and stopped in at the bank to get cash out for the groomer. As last time, Clemson looked great with his new ‘do’ and we are so grateful to have Kate taking care of him when he needs her. Bill has already booked his last appointment in October a week before we leave. I’m next on the list and probably Bill, for haircuts I mean. I was planning on tomorrow at First Choice so Bill and I can drive to Hanover together.
I made myself another tea and marveled at the beautiful day this is turning into. It is not even 12 noon yet and it is already boasting 20C with mostly sun. Perfect! At 12:30 I thought I should eat something more sustaining than a banana so made up a chicken salad with cottage cheese and olives on the side…….well, in the bowl. It seems filling so I hope it stays with me for the afternoon.


I look out the window and see another Mr. Snapper up on the grass hill. I don’t know what they think when they come up that far from the water but I won’t bother him and hopefully he’ll soon find his way home. I really felt like taking it easy this afternoon so I pulled my lounger chair out to the sunshine, retrieved my quilt from the bunky, set up a table and settled in with my book. I may as well catch some rays while reading.

There was a nice breeze so the sun, although very warm, didn’t seem hot. I’m surprised that I didn’t doze off. Clemson decided that he wanted out so he joined me on my chair for a while and then up on his stool against the pillow. That lasted about half hour and he was ready to go inside. I took him in and started to walk down the lane just as Bill called. I’m glad he checks in periodically.

It was about 4 o’clock and he was finished work for the day so had some time to kill before his appointment at 6. London had been getting rain off and on so he ate his supper in the car and was going to catch a couple of winks. I read some more and then fed Clemson at 5. One happy puppy. While walking down the lane, I saw a second snapping turtle. It was the same one we saw when Megan and Neil were here.


I don’t know where they’re headed but they seem to drop and sleep in the strangest places. It just means keeping an eye on Clem when they get so close. I don’t want his nose to get snapped. With his fancy new hair cut he hadn’t wanted to go outside much today but when the turtles disappeared back into the pond, I convinced him to go for a walk down the laneway.


After the news started I fried up some leftover potatoes with zucchini, tomatoes and a hamburger patty for my supper. It was very good and I finished my meal off with a banana split. I’m lovin’ the strawberry ice cream, only Chapman’s, of course! 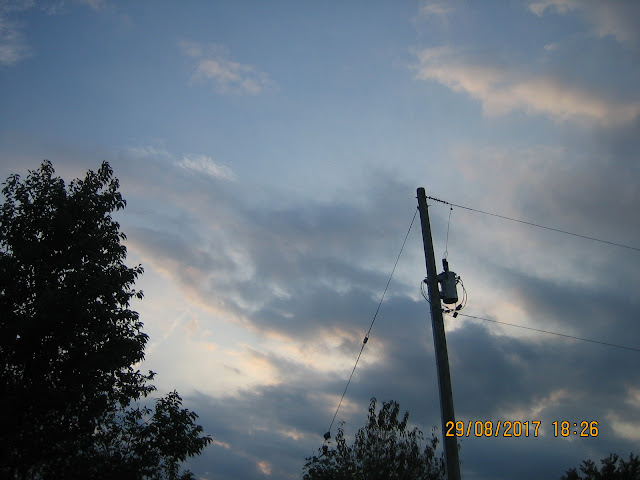 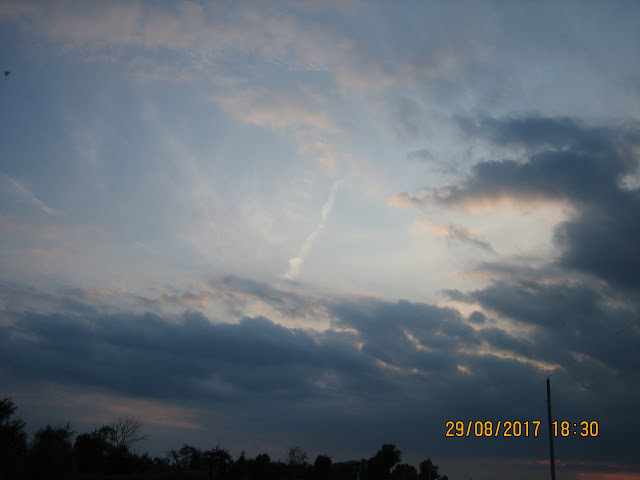 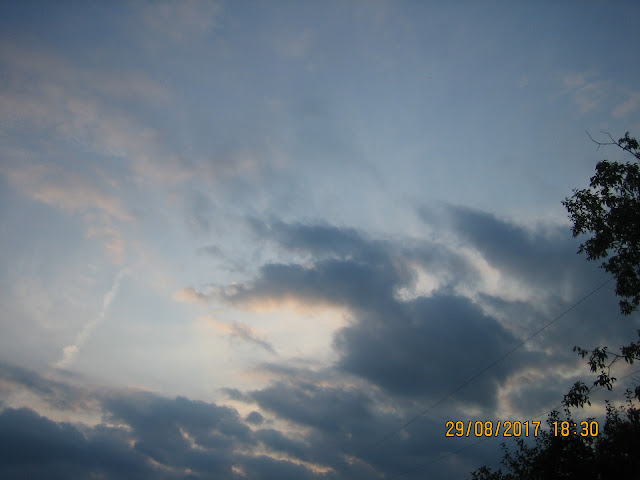 Even though it was still 20C the sun was hiding behind clouds and the air felt cool. Bill called at 7:20 and was on his way home. Yay! That is sooner than we both expected! He will be home by 10. I finished my post and curled up in my chair with Clem to wait for him with my book. I’m getting close to the end and it has me in suspense.

Thank you for checking my post out today. I love reading your comments!
Posted by Patsy Irene (Chillin' with Patsy) at 6:25 PM