It is now Sunday, June 26th and we have pulled out of Golden Pond RV Resort in Putnam. Bill pulling the 5th wheel with his cargo trailer behind and me following along in the Toyota. We’ve got ourselves a convoy! Here is our process.

Bill finished work at the Thames Valley School Board on Thurs. June 23

as I previously posted and then finished work at CanAm on Sat. June 25. Parting is such sweet sorrow and that was true enough for certain aspects of both jobs. Some goodbyes were forever, likely, and others just ‘au revoir, until we meet again’.
Pictures below depict only a few of the great relationships Bill had at 951 Leathorne St.

Bill was told by his supervisor that he wasn’t expected to do any work on his last day so other than stepping in when his replacement, Maria, was incognito, he did mostly that. He left the operation in good hands and was kept busy all day with friends, family and co-working well-wishers. Only a few pictures are included here, the rest are for his memories. 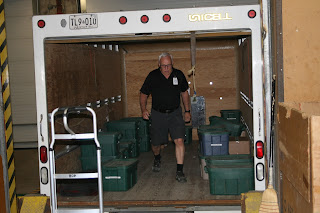 Saying goodbye at CanAm wasn't any easier I'm sure. 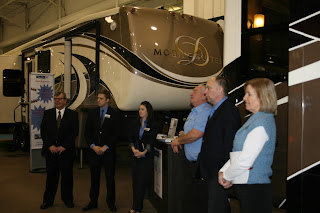 So Bill arrived home around 1:30 after a bbq lunch at CanAm and it was hot out and he was tired. With no one around us in the park, he wondered if after a siesta what did I think about pulling out today instead of waiting until Sunday? The pool was full of 'rugrats' (other people's kids) and I knew we'd never get in for a quick dip. So.....
We began the pack up. It had been a while since we’ve moved so I had to go through my list and make sure everything was secured. Close this, latch that, put that away and lock those. I work inside and Bill works outside. Probably the norm for most of us rv’ers?

The day was hot and no doubt humid, since we live in south western Ontario, so we wanted to get on the road as soon as possible. Our destination was The Ridge, our new summer home, a spot usually blessed with wonderful breezes.

Bill makes the hitch up look easy and doesn’t sweat it at all so I stay out of his way until he needs me. His joke is that he doesn’t ‘need’ me really, but he wants me. He gets off with a lot of things when he comes out with that choice line! So I made myself useful and went up to see our camp hostess and asked if she could prepare our final invoice earlier so we could leave. No sooner said than done, Ann brought it around with a summary of hydro costs and visitor fees.

So, all hooked up and on the road by 4:30 pm with no rain called for until the late evening, if at all. We arrived safe and sound by 7:15, all set up and rested by 8:15 and paid my sister and her husband a sneaky visit and joined in their campfire. We totally surprised them this time! They weren't expecting us until mid day Sunday.


We were on our way and at the same time we were getting ourselves away from the familiarity and closeness of London. A new chapter is beginning. Address: Priceville, On. with future shopping in Durham just 10 minutes away.

So, that sums up our move after 2 1/2 months in this area. Golden Pond was a nice park to settle for short term.

Thank you for following along on this journey of ours. We’d love to hear from you if you have the time and desire to comment.
Posted by Patsy Irene (Chillin' with Patsy) at 7:40 PM