Bill said it rained and we had thunderstorms through the night and early morning hours. I didn’t hear a thing until around 5:30 on Monday, Mar. 25th and then it was just light rain hitting the roof as we nestled under the tall cyprus. There is something about these trees that draws me. I can’t keep my eyes from roving up the bark to the tallest branches in the sky. Beautiful.

We got up at 6:30 and sat with our morning brew and books until some daylight brightened things up. Rob knocked on the door to check on departure time and we asked him about the weather as well. There will be some clearing skis later in the day so that was good news for our batteries. Remaining hooked up overnight, we did not have access to our generator if we needed it. Luckily, we did not. For breakfast we used Rob and Pat’s toaster since their genny was running and their toaster out. Thanks guys!
The fellow in front of them pulled out around 8 so we finished cleaning up, pulled slides in and gingerly edged our way around the cyprus and left the Jeff Busby area. It was a nice overnight spot, very pretty, but not ideal for big units. We were on the Natchez Trace by 8:30 following Rob to our next destination. Today would be a well-deserved short travel day to a park with hookups and a city with wifi! Yay! We hadn’t been driving long and the temperature had risen to 60F and there were definite patches of sun.
We pulled off to see the Bynum Mounds which are 2 large hilly grassy mounds built by Chickasaw Indians between 1,800 – 2,050 years ago. The story is that they buried their dead there as a memorial. There was a recording you could listen to but it didn’t play for Bill and I and of course, I couldn’t google it for more information. There didn't to seem to be any information for the visitors to the site. I’m sure you can check it out here. 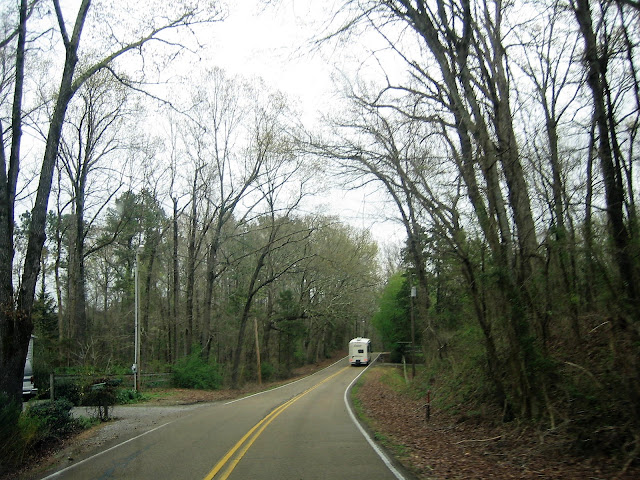 Bill and I noticed our destination on the right but somehow Rob and Pat missed the turn so we followed along an even more winding road. We should have followed our instinct and stopped but figured they knew where they were going. We’ve all had ‘woops!’ moments and this was one but Rob found us a turnaround lane and we were back on track and entering Tombigbee State Park by 10:30. Now that is a nice short travel day!

We checked in and secured 2 of the 20 park sites with 50 amp and water for 2 nights. Great price too at $17/night inclusive. This is a small park for a state park but it looks pretty. It is a mild day at 67F even with the cloud cover but Bill also notices some humidity in the air. We were set up, plugged in and Bill got our satellite dish hooked up before noon hour so the rest of the afternoon was free. I wrote the beginnings of my post and on the first (not the seventh) day (Monday), I rested. 😊

At 2 o’clock, I got up, stretched, used the facilities and took my camera and my phone for a walk. Part way to the back of the park, I noticed a wooden stairway with leaf covered steps going down into the valley. Throughout the valley, there was set up for disk golf games. I’d never given this game a thought until I saw it at Brownfield’s Coleman Park. Here was quite the elaborate set up, down, up and across the terrain. Even posted on a bulletin board within the play area, was a map of the locations for the ‘tees’. 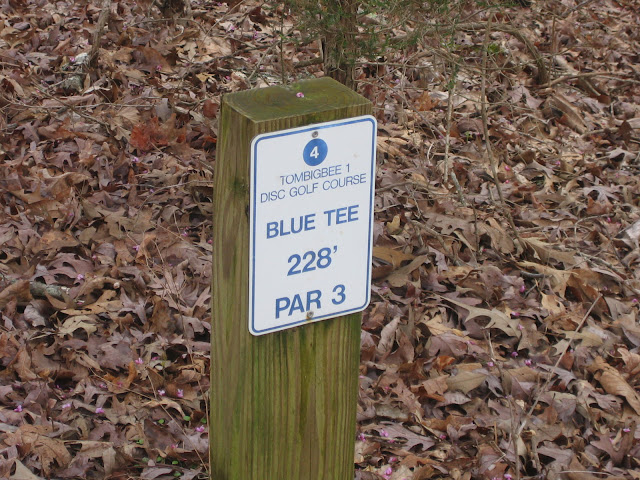 I texted Pat to see if she wanted to join me on the rest of the walk, down the stairs and further back to the tent camping area. She joined and we managed to get another selfie. We’ve been lacking in that area, haven’t we? As we headed back, I told Pat that it would be close to 3, time for Clemson’s walk. When I actually got back to the Suite, the little guy was sleeping for another 10 minutes when he was ready to go.

We walked around the front area of the park, to the lookout over the Tombigbee river. Lots to see here and many new places to sniff. Clemson was happy and I let him rule 90% of the walk before returning 30 minutes later. The sun had come out and our temperature rose to 65F at midpoint of the afternoon. I took my book at sat at the picnic table for about an hour and watched another Mobile Suite pull in to the park.

Rob and I hatched up a plan, well, he hatched it and I agreed, to go to IHop for breakfast in the morning. Tomorrow is ‘touring Tupelo’ day for us so we’ll get an early start. At 5, I came inside and since lunch was almost non-existent, I started the air fryer preheating. Chicken nuggets and Caesar salad was on the menu for tonight. I’m so loving having hookups expanding our meal choices during these short stays. 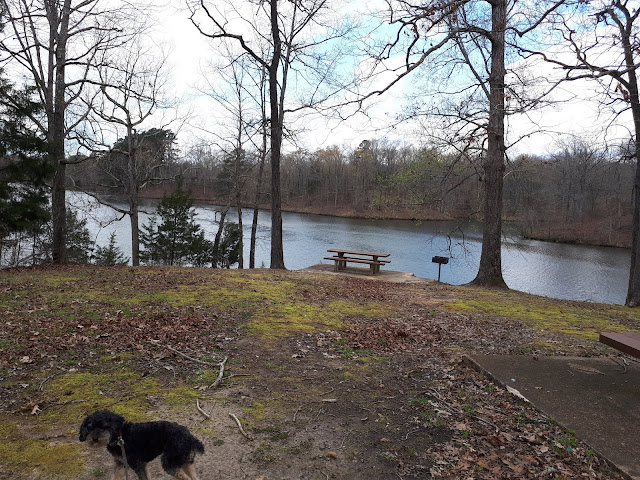 Tonight, being Monday, means a busy tv night for us. Once again, yay for hookups as it means we don’t have to keep an eye on our batteries.  Supper was great, the nuggets were delicious and we were all cleaned up by 6. Because our satellite connection wasn’t the best down here in the trees, we weren’t able to get a few of our channels. That means missing some of our key shows. I guess we’ll be reading a few chapters tonight.

This was a good day. Short distance travelling and early arrival in a state park. I hope yours was just as good.

Thanks for the visit!

Posted by Patsy Irene (Chillin' with Patsy) at 5:34 PM