Elephant Butte Lake State Park, NM
On Thursday, Nov. 21st I woke at 5:30 and remained curled up in bed for another half hour before slipping out. We didn't get into bed last night until after 10:30, that's more like it! Bill was stirring but didn’t get up right away so I went downstairs and finished the last 2 chapters of my book. When Bill came down, it was light enough outside for me to go for my walk. It was still warm, 53F. No sooner did I step out in my hoodie and vest when I felt light drops on my face and my glasses became speckled.

I put my hood up, slipped my glasses into my pocket and decided it would just be a short walk around the 3 levels. However, the rain stopped before I got to the corner so I did the loop to C (lower than us) and then up across loop A. No one was out at the Francis residence so I figured Higgy had already been out. I wasn’t cold by any means, but I was still glad to have my little mini gloves when my hands were out of the pockets.

Texting Donna (had to take one glove off to do that) she informed me that back home they were having a mild stretch, +2 and +4C and their snow was gone. She was happy that this ‘heat wave’ was supposed to last through to Monday. With the rain stopped, I walked out the main road and took a left onto the gravel that took me southeast and then further east down to the beach area. I should call it Gourd Alley as that is where the coyote gourds grow.

I gathered 4, 2 for me and 2 for Jo-Anne just for Thanksgiving decorations. Then we can toss them back for the critters. Bill and I were told last week when we asked an American that Thanksgiving was Nov. 21st so we didn’t check our own calendar. We should have done that as last night Jo-Anne said that it wasn’t until the 28th. LOL. We were misinformed and weren’t any the wiser so bought a small $8 turkey on Tuesday at Walmart. We planned on sharing it with our friends.

We can still share it and it is dated to remain in the fridge until Dec. 3. Saves me from finding room in the freezer, which is what we wanted to avoid originally with the purchase of a fresh bird. After returning from my walk, my tea tasted wonderful. I sat with Bill reading blogs and then I searched a recipe on Instant Pot turkey. 😊 It will be either that way or in the convection oven. 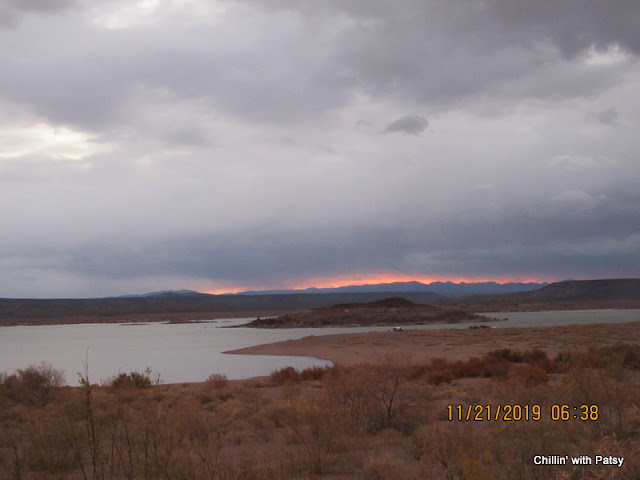 I also searched a couple of crocheting patterns and another recipe and jotted some notes. Today will be a day of inside stuff. The wind is not as strong as it has been and with the temperature only rising to 55 and very little sun, it will be cool for us snowbirds.  Jo-Anne and Bob walked by with Higgins so when she stopped to say good morning, I gave her their dvd and her choice of 2 gourds.

After making us toasted omelette sandwiches for brunch and doing the dishes, I washed and brushed my teeth ready for an inside day with my sweetie. That was determined when after a rainbow appeared in the northwest sky of dark clouds, the sky opened up. Did it ever pour for about 10 minutes! Puddles appear and disappear very quickly in the desert as the rains are usually quick demanding bursts in a short period of time.

Bill sat with his book and I sat at the table to write a few Christmas cards. With family cards finished, addressed and stamped I decided to give it a rest and make New York Cheesecake. I’ve tried cheesecake once before in Madame IP and although it was good, it was messy and I didn’t have proper accessories and had to makeshift a tinfoil pan. Then this morning, I found a cute father doing a tutorial on how to make the Million Dollar N.Y. C. with his young son videotaping. Cutesy!

I, at least, had an inner pot this time, but not one with a removable bottom so there was still some brainstorming to be done on my part. Hmmm. Worst case scenario, Bill and I will be dishing it up out of this pot or very worst case, eating it right out of the pan if it doesn’t remove easily! 😉 I prepared the crust, placed it in the freezer, made the batter and put it all in Madame IP for 26 minutes. Stay tuned!

Bill seems to be hooked on his David Baldacci book, Simple Genius, and it looks like it will be finished today as well. He has a lot of choices for what’s next, at least 10 or 12 books in his cupboard, ones I’ve already read. Outside, the sky has changed numerous times but it has been a light rain for the most part and it isn’t even 1 o’clock yet. If it ever stops, I’d like to get another walk in. With colder days coming, I’m hoping the weather gurus are at least right about all the sunshine in the forecast.


When the NR of 10 minutes was finished on Madame IP, I removed it and added the topping that the video called for. I put it in the fridge for 4 hours. Then because I couldn’t see raindrops on Black Beauty’s tonneau cover, I slipped out for a walk. I swear I’m being spied upon and the valve gets turned the minute my feet hit the pavement. The rain started almost immediately. Anyway, I kept going around Loop C and back home again. Maybe about ½ mile.

I felt restless and I wasn’t keen on starting a new book yet. Looking for something worthy to do I got the vacuum out and cleaned the floors top to bottom. There is a lot of sandy gravel here so it gets tracked in no matter how careful we are. I felt better with that done, got some water from the fridge and ‘then’ sat to start my book. First four chapters have encouraged me, now I know it will be a good book. 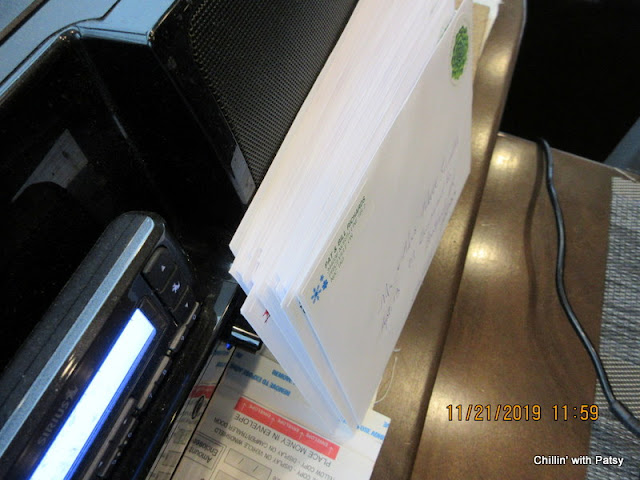 Jo-Anne texted about the 3rd rainbow of the day and I got up to take pictures. I’m only getting partials though but very pretty ‘ends of the rainbow’. Then she invited us over for Happy Hour around 3:30. Bill made a hot chocolate and I made a tea and we walked up the hill. Higgins, as always, was full of love and Jo-Anne holds him back until we get seated on their couch. I do enjoy the little guy, he fills a bit of the gap left from our own little bum. We had a nice visit and covered various subjects. 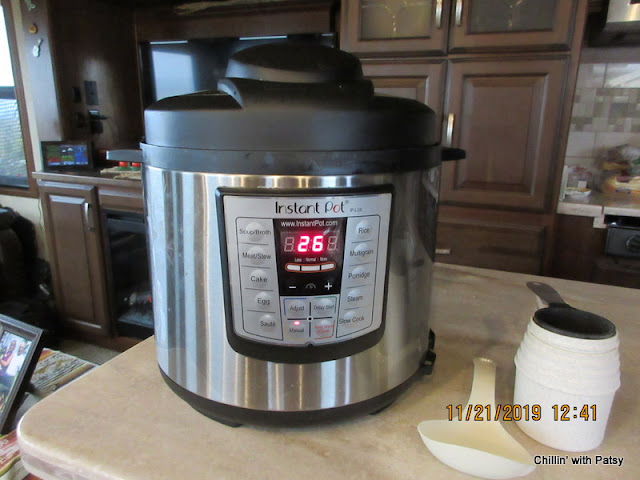 I noticed Jo had her Instant Pot out and a beef roast sitting on the counter so I clapped my hands and said ‘yay, you’re cooking with the IP tonight’. She has tried it once before, on the rice setting, with no success so has been timid ever since. With some encouragement and a few basic instructions before we left at 4:45, I felt confident they would have a great supper. Back home, we watched some tv, separately for about an hour and a half.

The old program House with Hugh Laurie was on CTV and I watched it continuously. We used to watch it but I don’t recall any of these episodes. As Bill says, it doesn’t mean I haven’t seen them. Ha ha. At 6, I started with supper. It was his choice tonight because it gives me a break from coming up with a menu. He wanted fish and chips so I fried tilapia loins and air fried the last of the French fries for Bill. I had Caesar salad with my fish.

After dishes, he helped me lift the cheesecake out of the inner pot, using the wax paper sling. It worked! This cheesecake was wonderful – capital W. I will definitely make it again and in the meantime, I will look for the correct pot so it will be even that much easier to make in the future.

I heard from Jo-Anne that with a little extra time on their IP, their supper was successful. that was good to hear, hopefully she will be comfortable using it in the future and not afraid to experiment.

Bill went upstairs with a movie and I sat downstairs to finish my post. This has been an inside day but I’m pleased with the things I took care of. We’ll need some heat on tonight as it will be a low 36F/3C. Brrr. I hope you’ve had a good day.

Thank you for dropping in. Your comments are welcome.

Posted by Patsy Irene (Chillin' with Patsy) at 9:12 PM