Elephant Butte Lake State Park, New Mexico
We woke up on Monday, Nov. 18th around 5:00 and since it was very dark outside with no street lights, rolled over and dozed until the clock read 5:50. Time to move! We’d both come to bed within half hour of each other last night, 9 and 9:30. It is unusual for Bill to go before me but I wasn’t quite ready and read a couple more chapters of my book before joining him upstairs.

We had a tea and coffee together while reading the update on George from Our AwesomeTravels. He is in our thoughts throughout our every day and we are mentally sending Suzie and the family our support across the miles. Life is so short and they have certainly made the best of theirs to this point. It ain’t over ‘til the fat lady sings, right George? 😊 Keep smiling, dear friend.

With a bowl of cold cereal under our belts and a quick wash, Bill did the few dishes up and secured cupboards. As he was closing the slides I walked out around the lot and be darned if I didn’t see a roadrunner!! He was so fast and it took me a minute to determine quail or roadrunner but the tail gave it away. I didn’t have my camera on me, naturally, and by the time I got it, he was out of sight. But, at least I saw my first one!

Bill pulled out of the lot, btw, we recommend it for a stopover if you are coming this way, and it was a duplicate of yesterday’s departure time. 7:50 we were in the merge lane for I-10W. Nice easy access, both off and on to the interstate. The air was cool at 45F and we began climbing in elevation almost immediately. Once again, I have to say ‘the views!’ The wind gusts were strong too, up here, in between the mountains and valleys. 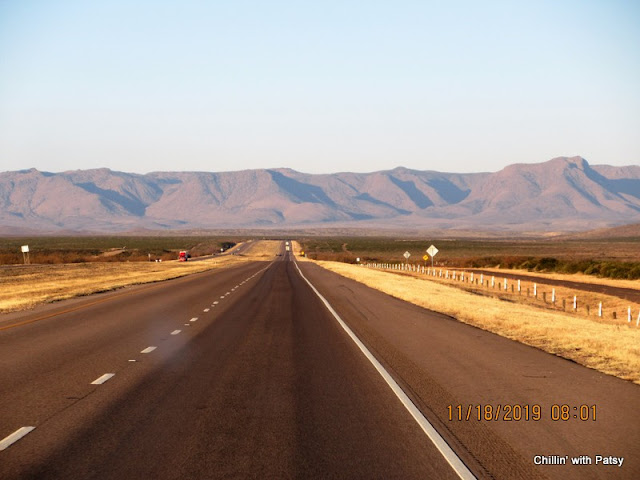 There was hardly any traffic this morning so we just nipped along at our regular speed of 65 mph. We don’t bother anyone when we're in the right-hand lane and they don’t bother us. Around 9 CT we changed into MT and gained an hour. Good, now I might be able to get out for my early morning walks again. Our clocks all changed inside the truck so I changed my camera time too. On time for once! 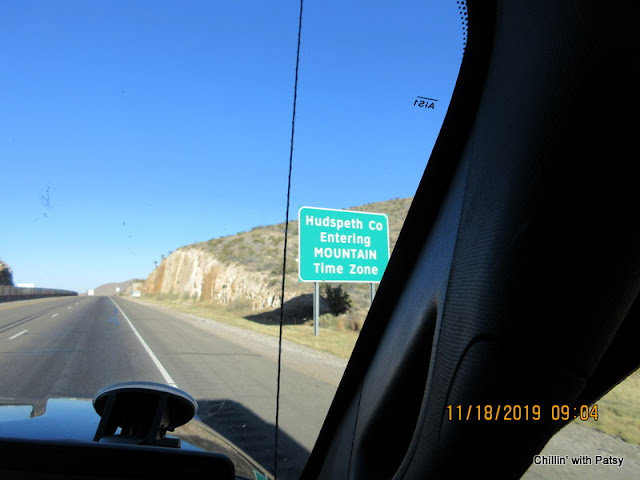 Interesting to note: I have been bouncing off and on data service while connected to AT&T between Saragosa and Sierra Blanca so switched manually over to T-Mobile. It must just be the area since it wasn’t any better. Not a big deal when we’re on the road. I switched back to AT&T. Bill has been watching our elevation and we reached over 4500’ before dropping back off. I wondered because my ears popped a couple of times.

At Fort Hancock, Exit 87 we pulled off at a Traveling Tiger Centre for fuel. It was almost 9 am (again) MT. It felt like déjà vu. Bill had no difficulty navigating through El Paso, it was a straight route.

At one point, I told him he could stick his left leg out and touch Mexican soil. Well, almost, it was right ‘there’.  Taking the exit at El Paso we followed I-25N. We crossed into New Mexico at 10:30 and were still amazed at the light amount of traffic.


The temperature, by noon hour, had increased to a balmy 71F/22C (feeling in our world more like 80F). Beautiful! We didn’t pack a lunch today, just our peanut bars, as we had planned on eating out.

We took the exit to Hatch and pulled into a familiar truck stop where we’ve got fuel before. Last year, we stopped here with our buddies, Rob and Pat. Today, it was just to eat so went in to the Sante Fe Grill.

It is a counter only with a very friendly ‘senor’ who looked after us with gusto. I ordered the Philly Cheesesteak with NO green chilis (when asked he told me that this season they are hotter than normal) and Bill ordered a cheeseburger & fries. We carried them out to the truck to eat. My philly was HUGE but so good that I ate the whole thing! No regrets either. Yummy.

Back on I-25N at 12:20 we were gung-ho for Elephant Butte Lake State Park. Unfortunately, when we’d gone online to check out availability, the sites we look for first were booked for the period of time we want them. Hmmm. So, with not many sites in the whole park left, I went online while Bill drove and booked us one in a different section called Quail Run. Bill and I stayed in this area our first year. Bill remembers it being busy then too so probably due to Thanksgiving weekend.

If you were reading my blog back then, it is where I saw my first kangaroo, er jack rabbit. A great memory, laughing at my misinterpretation of the wild animal. So, a little later, with 15 miles to go I checked the site again and there were sites available in the area we wanted. What gives? We decided to wait until we got here and see if the no-reserve ones in Loop B were open. The gal at the front desk happens to be the Host for Loop B and she told us there were sites available. Woohoo!

We drove up and found one easily. We like these because we can back in with a view of the lake out our back window. Once we were set up, I went online and cancelled the previous reservation. There was a fee, unfortunately – transaction fee but it is worth it to us and we have a site for $14/night full hookups for 2 weeks. I texted Jo-Anne and Bob to let them know that sites are filling up and that they might want to reserve as well. They may not arrive for a couple of days.

Bill set things up outside and I opened everything inside. I’d had a mishap in the top cupboard where a jar of Moab and Death Valley sand plus some stones from Elephant Butte was stored. Had to be from that rough road the other day but the jar broke. Not completely but enough to spill sand out onto the cupboard and out the door onto the couch cushions. It meant getting the vacuum out and cleaning things up. I was sad but decided just to pour the sand outside at the back of our site. I kept a few of the little stones.

Bill poured each of us a drink for Happy Hour and we chatted back and forth with Jo-Anne about their arrival. It would be nice if they got in the same Loop but you never know, there is such a turnaround in here. I took my book outside and sat in the sun between Black Beauty and the patio for a while. The rest of our site was shaded. The sun was hot and felt very good. Cancun was a long time ago! When I’d finished a couple of chapters and my drink, I moved inside. 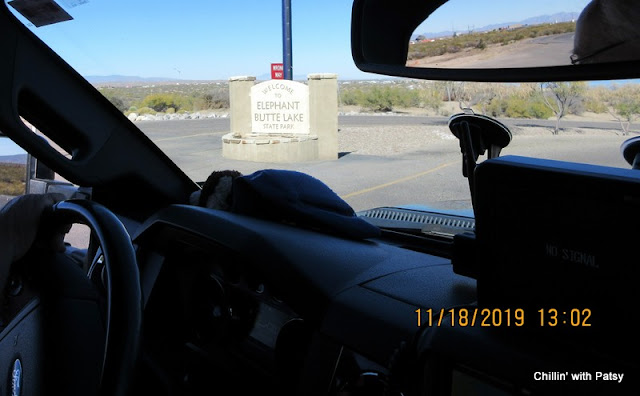 We tried once more to get the satellite connection to no avail. Frustrated, we gave up for the second time since we arrived. Maybe tomorrow, we’ll try again after some adjusting. Bill went around the Suite and changed the clocks to Mountain Time. I felt tired, even though it is only 4:30, so went up to the bedroom for a lay down before supper. I haven’t even concluded what we’re having yet. Maybe this nap would help me to stay up later tonight.

Around 5:30 I came down and because of our big lunch, decided on a ‘Po folks’ supper. I don’t mean New Orlean’s Po boys but instead weiners and beans. Quick, easy and filling. After dishes, we sat at our laptops writing my post for today and then hit the books. This was a good drive and I’m happy that we are going to stay put for a while. Time to clean the Suite, do some relaxing and wait for our friends to rejoin us.

Posted by Patsy Irene (Chillin' with Patsy) at 7:33 PM