The Ridge
On Sunday, July 12th Bill and I woke at our normal time and lazed until 7. We had ‘working around home’ plans today so we sorted clothes into 2 loads and Bill made a coffee to go. In at the Mat, we loaded the washers and then set to work. Bill uses a special wrench rather than a key for the old dryers and got them cleaned out. The lint gathers up under there and it was due time for them to be done.

I spent more time wiping the machines out today since he looked after the floors for me. Dry and wet mopping. Nice to have a helper! We finished cleaning and then decided to put our clothes in a dryer rather than take a chance on the rain. We were on our way home by 8:30, everything done and folded. I made my tea and Bill went out to start cutting the front field. Things are wet but we think it was just heavy dew.

There’s no rest for the wicked, so the saying goes, so after my tea, I got the vacuum out and did the floors. Bill came up around 11 with one field done and had some toast and peanut butter. I made myself a bullet proof coffee. A good high fat number there. I’m still working on increasing my daily intake. It seems to be working for me in more ways than one. Still no rain so Bill went back out to cut after he finished eating.

While I was sitting at my laptop, I downloaded a few old pictures I’d found in my oldest uncle’s collection a few years ago. It was at a family reunion and there were boxes and boxes of stuff that my cousin, Ellen, brought for us to go through. I wish we could have sat all day and just rifled through, such interesting photos. I picked up 2 or 3 of his diaries as well and get a kick out of reading those on occasion. How difficult and yet simple his life was. 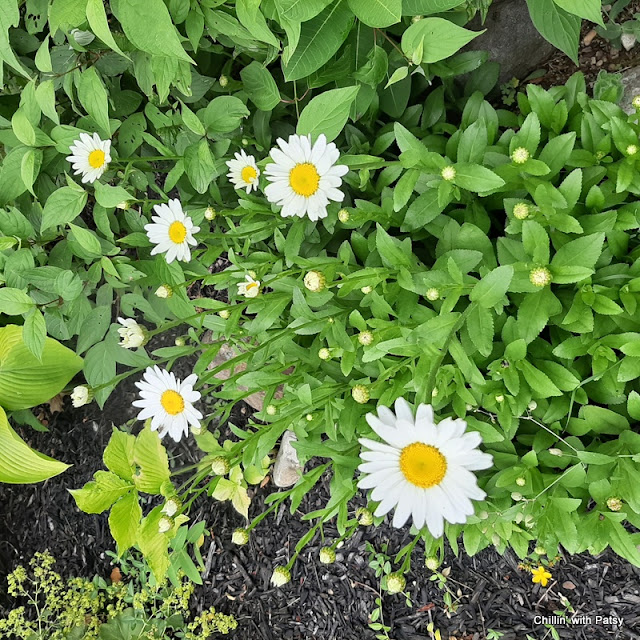 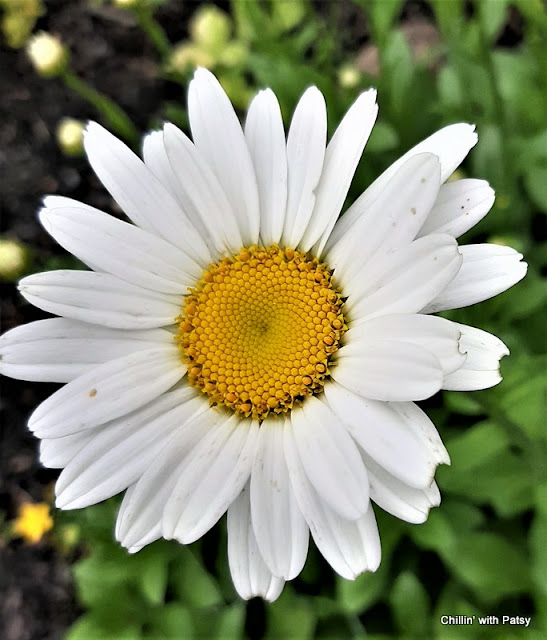 I posted some of the pictures on our family web page in Facebook so others can enjoy them as well. While drinking my coffee, I was deciding what to do next. Wash floors, do some hill weeding or start sewing the wing covers for Bill. It would take the least amount of time to do the floors so I got our rag mop out and took care of business. I have to wring it out by hand but it is so easy and does a great job in the corners too.

The next least time-consuming task was to sew Bill’s covers so when the floors were dry, I went out to the Bunky to do that. In the meantime, I tried calling my daughter since I missed her last weekend. Getting an answering machine again, I went about my work. It was quite comfortable out in the Bunky with the door half open but by the time I finished both pieces, I needed to open the north facing window to let air flow through. I half expected a visitor, Chippy, with the door open but didn’t see him.

By the time I’d finished, Bill was done the fields and our front area so asked for my help to put the back seat covers in Ptooties. These things just aren’t quite right in a few ways but for now, the seats are covered and protected. It was after 1:30 and I still hadn’t eaten so that was my next move.

A cup of fried chicken hearts and 4% cottage cheese would boost my energy and fill me up until supper. I wish we had some fish in the freezer because fish and chips sounds good.

Bill finished up on the berm behind us while I ate and the afternoon was half gone. Might not get to the hill for weeding after all. I don’t know how easy it would be, even with the damp ‘sand’ but at least I’d have a better grip on the hill with my new booties. I cleaned up the morning’s dishes and then went out to putter around the yard. I moved the lawn furniture from the patio mat back onto the grass now that Bill had cut it.
I was avoiding the hill but still wanted to do something worthwhile so I started pulling weeds in the flower garden. The hanging pot with Verbena wasn’t doing too good at all. I’ve moved it to a couple of different locations but the flowers and stems just seem to have given up. I’d heard that you could cut a hanging plant back and fertilize it in order to bring it back to life. So, I tried that and will watch it over the next few days. Then I took a walk up the hill to take pictures of more flowers. It was a big treat to find 6 tomatoes growing on my plants.

As I was weeding, Pat texted and invited us in to their place for Happy Hour at 3:30. Yah! That sure sounds better than what I had in mind and Bill agreed. I took a walk down the laneway and back. The geese were all in our front field eating out of the freshly cut grass but they weren’t too skittish as I walked by. They were wary for sure but didn’t move because of me. I’m just surprised they are all still around as I know one day they’ll leave us.


We packed a cooler with drinks and that was when the wind came up and the sky darkened. I pulled the awnings in and ran out to close the Bunky window and the storage shed doors. That was when our dining tent took another dive. We didn’t peg it down, just had it standing to dry out. Oh well, we just laid it flat on the grass again and drove into Durham. We didn’t want it to blow away while we were gone. 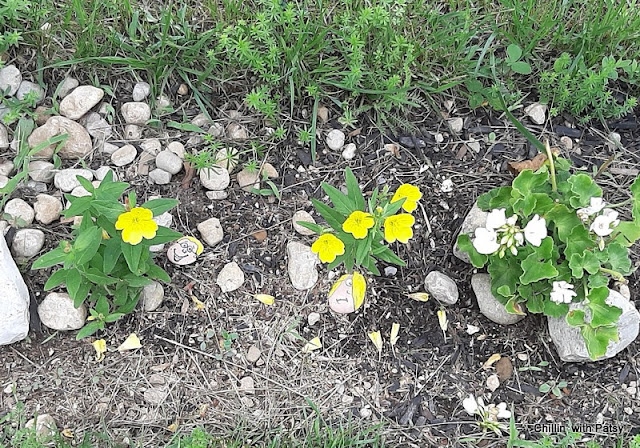 It was lovely sitting on their front deck and we had a nice visit, catching up on a few things. Bridgette called me back around 5 and I was happy to hear her voice with Chris in the background. She’s off the hook for another week or so. Ha ha, just kidding, I just like to know the ‘kids’ are doing well and that’s 2 in two weeks so I’m good. 😊 We left around 6 and came home for supper. It was a great visit with our buddies. 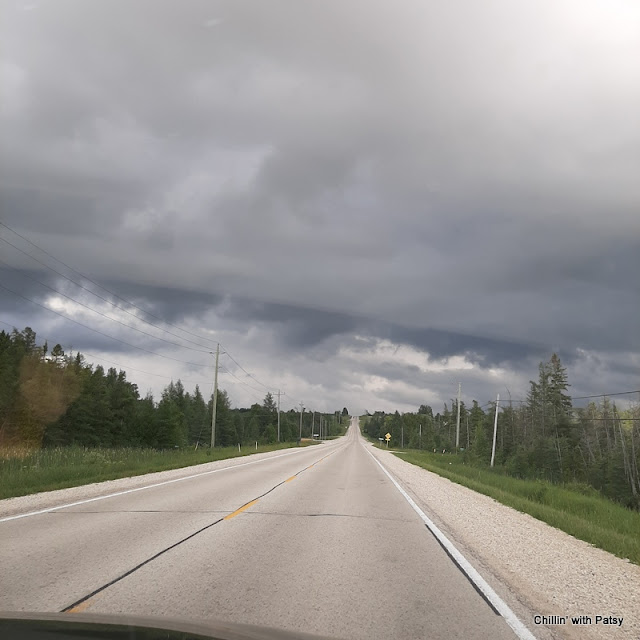 I’m glad I had leftovers from last night as it didn’t take long for the microwave to reheat it. Hardly any dishes got dirtied and we had an enjoyable filling supper. As we were sitting at the table, Bill saw a mouse come in the closed door (?) and run around by our shoes near the propane heater hookup. What the?? He cornered him with my boots and held him there until he was in a position to annihilate (yes I looked up the spelling) the little imp. Got him! Bill 1, Mouse 0.

Hopefully that was our garbage picker and trap stealer. Marilynne called as Bill was tossing the critter outside and we caught up with what was going on in her life as well. It has been a busy Sunday and we're at the end of the weekend. After dishes, Bill went down to the cargo trailer to work on hanging the wing covers. I’ll get a picture tomorrow if he gets it done.

I worked on my blog and watched the last hour of The Fast and Furious at the same time. It was a good day and a lot got done, including some connections with family and friends. I hope you enjoyed yours too. 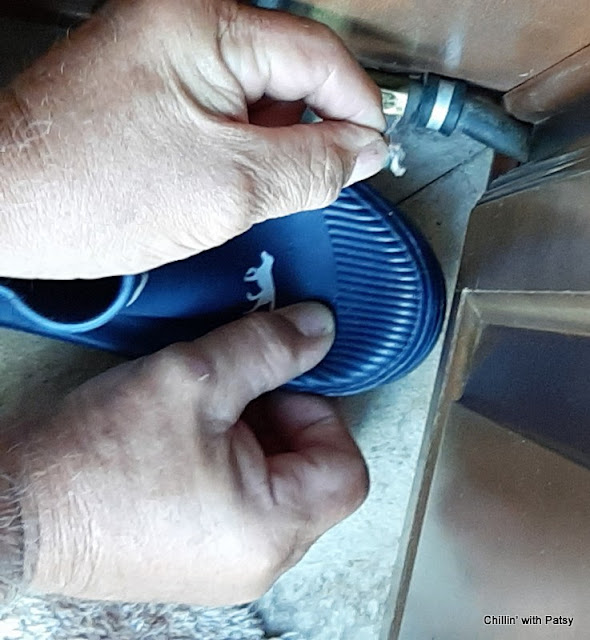 Thanks for dropping in.