The Ridge
Thursday, July 9th Bill and I were up within 30 minutes of each other. He went in for his shower and I dressed, loosely, for my walk. It was forecast to be another ‘heat warning’ kind of day according to the weather networks. I’m grateful that my walk takes me mostly in the shade along Baptist Church Road and I know not to walk fast in this heat. It was already 18C/64F.

Today, on my return I met up with the couple that also walks this stretch every morning. In fact, more dedicated than I am and I think they go even further. The difference today is that they stopped and introduced themselves and visa versa. That was very nice, whether this is the only way we communicate or not. They live, as Bill and I suspected, in the house beside the church which would make him the Pastor. They both gave a very nice impression.

Back home, Bill was walking down the lane to meet me but only because he was ready to leave for work and it was too soon. 😊 I was hoping to see him again before he left. Soon, he was on his way to Hanover for another job that will probably take at least a couple of days. I hope they are in shade for some of the day at least. I don’t know how he does it in this heat, honestly! Kudos to him!

I had my creamy tea with coconut oil and read the blogs I’ve been missing. At least the latest ones. There were a lot so forgive me for getting behind in my reading. After a good morning to my sister, Donna, I dressed in my work clothes and drove over to Mitch’s. It isn’t even 5 minutes by car but too hot to walk, especially on the return trip after working. Still working on the car’s sanding but Mitch showed me the area to concentrate on today.

At 10:15 he offered me a glass of ‘French wine’ (said in his ridiculous attempt at the language) which I declined. I haven’t eaten yet and wine before lunch just doesn’t turn my crank. He was having a beer and didn’t want to be rude and not ask. It was 2 hours and the breeze that was coming in the door and window had died down to nothing. He isn’t as high up as we are here on the Ridge and I notice that difference once I return home. I signed the calendar with my time and left.

There was a breeze up here so I took the California duster to Ptooties. These gravel roads sure do a number on our vehicles which is why we don’t wash them often. The duster helped but I’ll have to use Windex on the back window as from sitting under the tree by the Restroom, there is something sticky on it. ☹ Enough for now, I came inside for my shower, desperately needed.

I’d decided after lunch that I’m going into town to the Durham dam for an hour or so. Why not? There is no relief up here from the humidity and as long as there is free swimming, I’d like to take advantage. I put my bathing suit after I got dried off from the shower. That would encourage me. It is easy to talk myself out of things that are different, especially when I’m alone.

So, I made a coffee and a salad plate for lunch and then sat and read for a bit. Do I? Don’t I? Finally, at 1:30 I put my lounge chair in Ptooties along with my sun hat, towel, book and water in my beach bag. I’m glad I pushed myself. The dam parking lot was packed with about 15 vehicles but I edged in between two and with a big ‘just do it’ breath walked down the hill with my stuff.

I was looking for shade not expecting to find any but I did! A spot just for me under a big tree, more than 4 meters away from another couple on a blanket. Perfect! I settled onto my chair and just people watched for half hour until I was hot enough to take a dip. It was cool but oh so wonderful!! Why don’t I do this more often?

I read, I relaxed in the breeze and worked on my crossword and word jumble. There were distractions of course but that’s okay, it is nice to see people out enjoying themselves. It was around 3:00 when 2 ladies beside me with a young grandson saw the dark sky and left. That made a difference in the decibels around us but it didn’t matter too much as I was packing up myself at 3:30. I hated to leave, thinking that the sky would clear but figured Bill would be home soon anyway.

Donna said it was raining heavily in Hanover with winds so I assumed it was coming our way. Bill pulled in just ahead of me after leaving work at 3 and stopping at the Acreage for water. We were getting low. The winds picked up so I put ‘blow-ables’ away and by the time Bill finished with the water transfer, the sky opened up. A lovely rain for about 15 minutes. I didn’t want it to stop yet and there is still grumbling at 5 so maybe there will be more.

The air has dropped from 33C/90F to 20C/68F and we can breathe again. 😊 When the rain stopped, it felt cool for about 2 hours and then we noticed it was warming up again and the sun came back out around 6:30.  Another hot day tomorrow by the sounds of it but at least we got some much-needed rain. Bill and I sat inside and watched some NCIS until 6 and discussed options for supper.

I was out of lettuce for salad so we agreed on toasted tomato and cheese sandwiches. Of course, that sounded good but here I am trying very hard (and succeeding this week) to avoid the bread. Oh well, it’s only one day, right? I had bought some ready to eat cooked bacon at Foodland earlier this week so offered that to Bill. He was pleased to be able to add that to his sandwich.

Checking the carbs in 2 slices of white bread and 1 tortilla, the tortilla won so I had a wrap instead. We each had a dish of Jell-o for dessert and cleaned dishes up before 7. Bill walked down to the Hangar to see if any rain came in his little window. It’s a high window but it really depends on which way the rain came. It did look mostly straight down but you never know. With low winds again, I put the two awnings out to block the sun.

This was a good day. I’m glad I got another couple of hours in on the car and even gladder that I got in a swim in town. I forgot to write on Tuesday that I placed a phone call to Rockwood to see how Mom was doing. The connection I had with Maryann, the nurse, was not very good. It sounded like she was walking around but I'm not sure that was it. Some things I didn't catch but the jist is that Mom still walks a lot. She still finds a comfy chair in the lounges, specifically the one by the office and is still eating her meals. 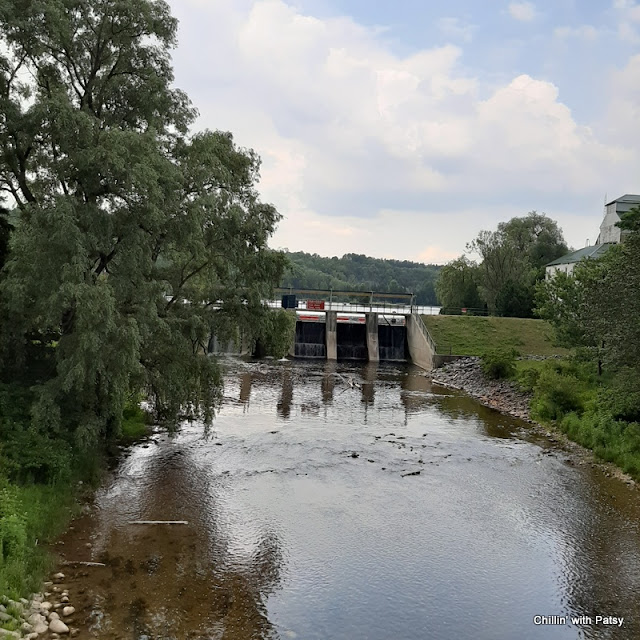 She has been getting agitated a fair bit which is a symptom of dementia but they also wonder if Mom is experiencing some pain. 😟 They were setting her up for a visit with the doctor for some tests. The good news is that Mom still names all of her children either by looking at her board of pictures or by counting us off on her fingers. Maryann said she thinks that she would 'know' we were one of hers when next we see her. I sure hope so because I have no idea when that will be. 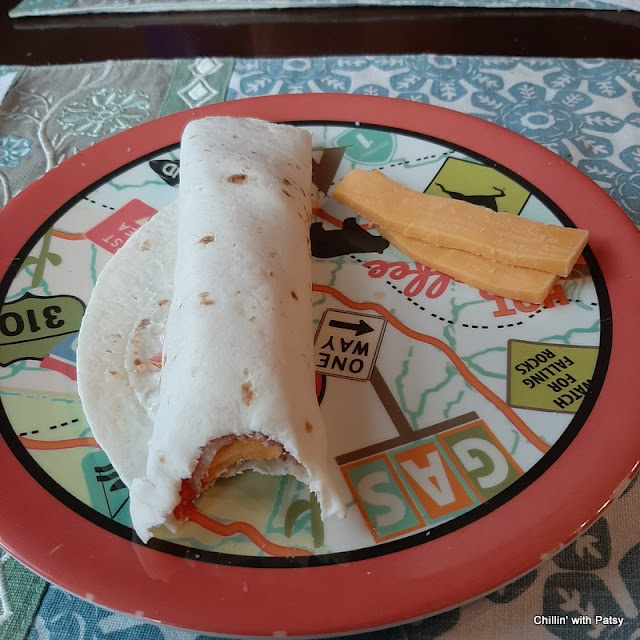 Bill had a very hot day of work not too far from here. They are building a new deck adjacent to the above ground pool on a property out in the country. It will be a few days’ work. They were treated well by the owners with offers of water and Gatorade. The boys would dip their hats in the pool occasionally to cool themselves off during the day but Bill still came home with some red shoulders. I’ll have to go back to putting sunscreen on him again tomorrow.

I hope you’ve had a good day and also got some rain in your area.