The Ridge
On Friday, July 24th, I could have slept in but apparently my sleep mate could not. He was awake and up at 5:30. I slept on until I HAD to get up at 6:30. Well, only because we wanted to be in at the Mat for 7. Bill offered to go with me this morning as the light and door timer was out of whack. What a difference it makes when all lights are working. I meant to get a picture of Jamie’s fix on the front door but forgot. We'll be back on Sunday so I'll get one then. He did a good job for now.

Bill set the timer and then did the floors for me while I cleaned the tabletops, carts and machines. We were out of there before 8 and home within minutes. I was able to relax with my tea and get over to Graceland 2 for 9. That was nice, rather than 9:30 which it usually is when I work both jobs the same morning. So, Mitch had asked if I would start with deadheading for him so that was my first hour and a bit. It was a nice job today, not too hot and a lovely breeze blowing across his front yard.

The last 40 minutes was inside, finishing the fender and what not (I don’t know what the other thing is!) before leaving at 11. Brian was in again, painting the railings so I wished them both a good weekend and zipped home to Bill. Mike didn’t need him to work today so that was nice, having Friday off. He’s used to eating breakfast now at 6:30 so I wasn’t surprised when he had some cereal around 8:30 before I left.

I made myself a coffee and then I, too, wanted a nibble so had about 10 Shreddies myself covered in more cream than I had cereal. 😊 Bill was busy working in the Hangar but when he finished his job (he can write about what he’s doing) he came up for a short snooze. I knew he got up too early! We had some cheddar and then drove down Glen Road (across the highway from Baptist Church Rd.) looking for a recommended gravel haulage business. Found it but not the owner.

Bill wanted a couple of things that were on sale in the Home Hardware flyer so we drove into town. Josh, the owner, is such a nice man. He gave Bill a couple of great deals on things he purchased. I found a couple of bird feeders so gradually I can get rid of the old broken ones. Are there still hummingbirds around? No point in filling my new feeder if they are gone. We sat at the table, Bill doing the banking from our purchases and I started my post.

I meant to mention that in between working at Mitch’s and going to town, I placed an Avon order for my sister, Gayle, and I. I’m glad she ordered something as it was a reminder to do the same. If I don’t every couple of months, I could lose my representative status. With that done, I went online to Henry’s in London. I found that the Canon Powershot camera (identical to mine) was on sale for a $20 savings. Great! I ordered it for free delivery. I’m excited that Bill was so supportive. Now just waiting to see how long it will be before it comes.

Bill was outside working on setting up Gerry’s jet pump so we can get it to him at the Acreage this weekend. We’ll do ours over the next few weeks, other things take priority. We stopped at Northline Sales & Service to check on our riding mower but we need to wait for them to try something on Monday before we pick it up or give the go ahead for a repair.

I wasn’t feeling too energetic this afternoon so no onions got planted today. Tomorrow morning, that is my job as I have nothing else going on. In the Bunky, I worked on the puzzle until Bill came in and said he was going to call the guy about gravel. As it turned out, Alex could bring a load of A gravel right away. Wow! Fast service, on a Friday afternoon and at 5 o’clock! We’ve never met him before but chuckled when he said he had bid on this property too. Lucky for us Gerry got it.

He was here within 15 minutes and dumped it where Bill asked. He said he couldn’t spread it for us but we didn’t expect him to. Bill is happy and spent less than he’d planned to. Tomorrow morning, guess what we’ll be doing. After I plant onions. 😊 Inside the Suite, Bill moved money around and I made a rub for the pork ribs. Madame IP was ready to cook supper tonight. I added potatoes to the pot and hope they will be done this time.

We were eating later than normal but oh my, the ribs were amazing! The potato was also done perfectly and I had the yellow beans that Mitch gave me. What a great treat they were, fresh from the garden. Guess what I’m planting next year in MY garden. Worth a try! 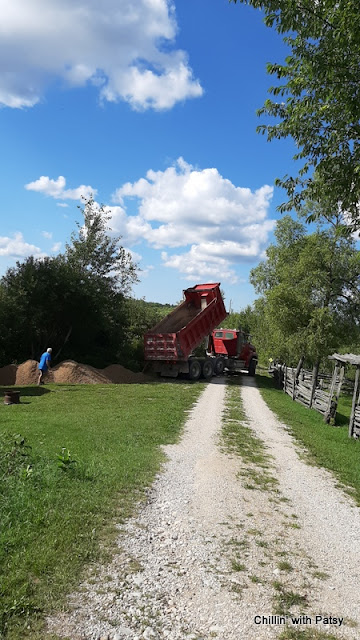 After supper, Bill texted Gerry and asked him to pop over with a couple of his wrenches. Taking a piece of metal pipe off the old jet pump was proving to be almost impossible.

Then he went down and started moving gravel around. I knew he couldn’t wait for morning to start at it. I pulled his chair out from the Hangar and sat on his porch and supervised. I wasn’t prepared to work tonight.


We visited with D & G for a short bit, long enough for the guys to have a beer together, and they still couldn’t get the part separated. They left around 9 and Bill and I moved inside to watch a movie. I’d seen The Beach House before, a couple of times, but Bill hasn’t seen any more than bits and pieces.

It was all I could do to keep my eyes open until it ended so at 11, I blindly found the stairs and the cool bed. Bill was right on my heels. We had a good day! 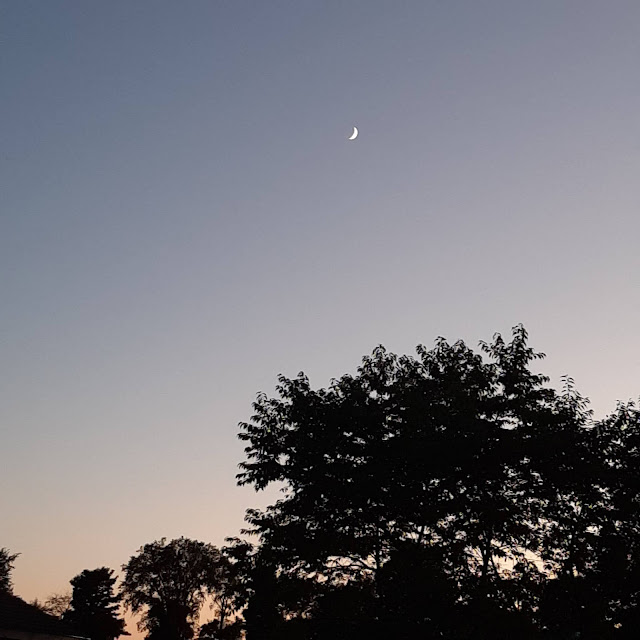 Thank you for your visit. If you wish to comment, I’d love to hear from you.

Posted by Patsy Irene (Chillin' with Patsy) at 6:37 AM