The Ridge
On Tuesday, July 28th I was up at 6:30 and out the door at 10 to 7. Bill wasn’t leaving until 7:15 but I wanted to get in and out of the laundromat as fast as possible. Yesterday, I found that I drank my tea in between walking and working at Mitch’s too quickly. After half hour at Graceland 2, I had to excuse myself to come home briefly because of an upset stomach. It's okay to feel that way when I know what the cause was.

So, today, I took my tea along to Durham instead of water so I could drink it slowly and be done by the time I headed over at 9:30. I was about half way through cleaning when Mitch called and asked a favour. He needed cigarettes so I stopped at the variety store to pick them up on my way home. Donna calls me his Girl Friday. Well, I’m more like Girl Tuesday and any other day. But I seriously don’t mind since I’m on his clock.

At Graceland 2, I deadheaded for 30 minutes and then drove to Durham once more. This time to pick up a couple of things for Mitch once the drug store opened. I was back pretty quickly. Then he got me taping the windows and covering them completely with newspaper.

I can’t do that with gloves although I do wear them when I’m hand sanding. The newspaper print had my fingers pretty black in no time but I finished all but the front windshield and I also covered the chrome and black grill. I added 3 hours to the calendar.

At home, I was ready to eat but had my shower first because I felt pretty grubby today after leaning up against the Plymouth. Then I put together my lunch plate and went about the rest of my relaxing day. I had no other plans but to stick close to home and work on putting my book together. It’s all on my laptop but not actually ‘online’ until I’m ready to publish it.

That’s a very good thing because it takes a long time to decide what font, theme, colour, style and then organizing the layout of each page for pictures and text. I do enjoy it though, or I obviously wouldn’t do it each year. There are various websites to do this on but I’m used to BookSmart and have just continued working with that one. There are frustrations here and there, as in most online stuff, but that’s to be expected.

I had an email early stating that my camera had been shipped and expected to arrive by post on Thurs. July 30th. Cool! Before I had been sitting too long at my laptop, around 2, another email came in that had great news.

I wasted no time at all and was out and down the lane to retrieve my package. How excited I was! It was like finding a lost friend. Because we may get the purple one repaired, depending on the cost, I ordered this one in silver so we would each have a different one. 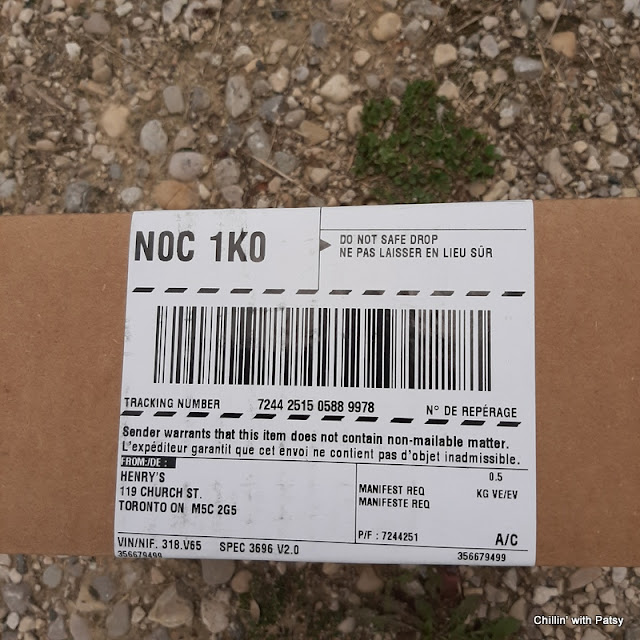 Bill came home early today which was very nice for him. I think it was around 3:30 when he drove in the lane. With this and that, the rest of the day passed us by and at 6 Bill came up to see what I’d planned for supper. We had shrimp sautéed in butter with French fries in our Fry Daddy. The temperature today was perfect. I didn’t notice the humidity at all, although it was still quite present in the air. The Suite remained very comfortable too.

We watched some tv in between doing the dishes and Bill spent the evening down in the Hangar. I couldn’t keep myself awake and interested enough to write my blog so sat in my chair instead. He came up at 9 and I had just finished watching the tail end of a sad but good movie. One Good Thing with William Hurt, Meryl Streep and Rene Zellweger; all good actors. By 9:30 I gave up and went to bed.

It was a great day though and I had a surprise early delivery as the hilight.

Thank you for checking us out today to see what we’re up to. Comments are always welcome.

Posted by Patsy Irene (Chillin' with Patsy) at 6:07 AM