Nature has Me Feeling Deflated and Sad, Too Hot to Work

The Ridge
Wednesday, July 8th already. Hump Day. We are hoping to soon be over the hump of this heat wave. I have the window next to my face and we could feel the cool air when we went to bed at 11. However, there wasn’t any breeze at all coming in between 12 and 3:30. I don’t think Bill slept well last night because of the heat. I suggested he close windows and doors to the bedroom and turn the a/c on. A simple fix. He didn't and we eventually managed to drop off again. 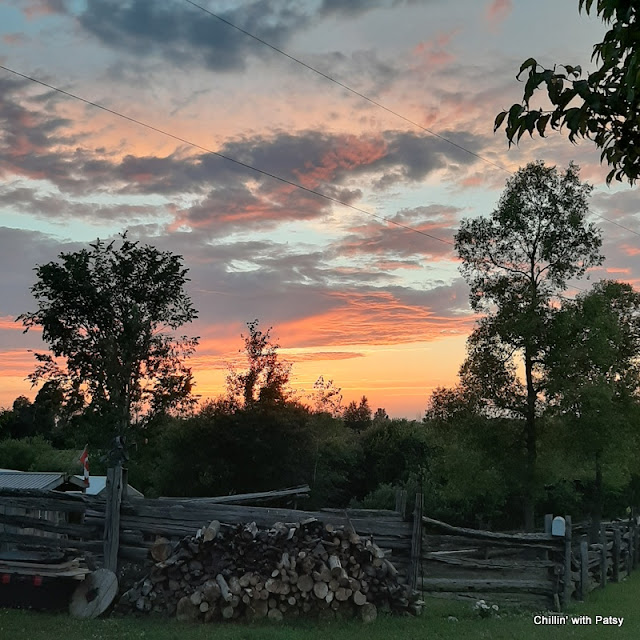 Anyway, he was up, showered and finishing getting ready when I left for the Mat at 6:50. With plans to work both jobs again this morning, I wanted to be done cleaning with time left to come home for my tea before going to Mitch’s at 9. Unfortunately, I couldn’t get in, both doors were locked. I would have waited the 15 minutes but when two customers arrived, I had no choice but to text Jamie. He told us he was on a late work shift so I hated to wake him. ☹

He never minds when I text, says it isn’t a bother. He wants to service his customers and that is a great attitude as a business owner. Bill dropped in at the same time Jamie showed up and they chatted about a few things that needed to be looked after when they both have the time together. I like that they get along and can bounce things off each other. Before I left, he tried all my keys and we found one that opens the back door. Yay!

It was 8:30 by the time I’d left there and nipped up to Foodland to see if their pop and bread order came in. Well, half was better than none so I picked up the bread and some milk at a decent price. I also found some good fat meats for my lunch plates.

I’d texted Mitch that it would be closer to 10 when I arrived. No response by the time I turned onto Baptist Church Road. Oh-oh. Looks like they are resurfacing the whole road, laying gravel this morning. That slowed me down while I waited for the gravel truck to drop and spread his load. There were about 5 trucks on that stretch when I came through. I saw that they were talking to Mitch about parking their roller on his property and I was again delayed at our corner.

By the time I got home, I was already frustrated even though I appreciate what they are doing and waved with a smile as I passed. I made my tea after putting groceries away and with no breeze to speak of decided to cancel work at Mitch’s altogether. I called and left him a message. I know he won’t mind, but I just like him to know not to expect me. I’ll go tomorrow and maybe, (not counting on it), it will be cooler or at the very least breezier.

When my tea finished, I got Madame IP out and sautéed, then cooked 4 chicken thighs. Now we’ll have some better meat to have with our salad tonight. I know Bill won’t want me cooking again. If you noticed today’s title, you will be wondering what is so sad. Well, for the second time in 3 days, we’ve noticed a skunk on the property.

Last night, after supper, Bill saw him at the bottom of the corral hill. We watched to see if he was coming up and Bill longed for a pellet gun. Might be a good idea. Then, I realized what he was doing. He’s digging up the turtle’s eggs!! No! I went out and walked down the hill as close as I dared, throwing small rocks at him. It spooked him but as soon as I walked away, he was back. That was when I noticed that the nest up by our Weber, was dug out and empty. ☹

All the work those little turtles go to to find the right spot is all for naught. It makes me angry but it is nature and there’s nothing to be done for it. I remembered when I walked to the mailbox on Monday that a lot of the holes in the lane looked fresh. That is why. Even the eggs that I had to cover up have been dug up and eaten. So, yes, we are both deflated after being so excited to have babies up here.

My lunch was around 1 and it was the same kind of lunch with little variation. I’m enjoying it but need to boil more eggs to add to it. I deadheaded my own petunias and took some pictures of new blossoms on hostas and our roses. Then it was time to move inside. The heat was unbearable again and no breeze. Inside, I went with Bill’s plan for not turning the a/c on. Yesterday, it didn’t make a huge difference so I decided to grin and bear it.

I brought my little fan in from the Bunky and with the fantastic fan and ceiling fan blowing on me, I dozed and read, dozed and read. I didn't like this feeling of ‘slothiness’, each time I moved, I felt lethargic even though I drank lots of water. At 4, I went outside and sat on the patio in the shade. I was surprised by the breeze that came up because it sure wasn’t coming in the windows. It felt nice.

Bill came up the lane around 4:30 and I was glad they quit a bit earlier today. They’d finished their job and he helped a couple of the workers load wood for the job tomorrow. We each poured a cold drink and Bill sat inside with NCIS and I sat outside in the dining tent with Chippy. Both Casanova and Romeo paid me a visit so they each got peanuts today. 😊

Around 5 I moved into the Suite and watched tv until after 6. Time to eat! We are enjoying the salads for supper right now and the added chicken made it all that much more inviting. We had a dish of sugar and carb-free lime Jell-o and that was just the right amount of food. I worked on my blog and Bill worked on some finances.

We were both thrilled to see that our bonus payment from the Government was deposited into our account today. Any Canadian, 65 and over, collecting Old Age Security will receive it this week. How can we argue that? Thank you very much is what we say to that bonus. Bill socked it away into a special account and we enjoyed the rest of the evening.

It wasn’t the day I thought it would be but I did get the Mat cleaned and had a chat with Jamie. Now I know I can get in there any time to start work. I hope to get over to help Mitch in the morning.

Email ThisBlogThis!Share to TwitterShare to FacebookShare to Pinterest
Labels: Nature can be disappointing
Location: Priceville, ON N0C 1K0, Canada