Morning Walk Together, More Than One Definition of Dry, Friends Go Home

On Wednesday, Sept. 20th Bill, Clemmy and I got up around 7. With most of the windows open in the Suite, we knew that it was going to be a warm DRY day. We opened the blinds and I was optimistic for sunshine after yesterday’s rain. I was putting my runners on when Bill asked how far I was going as he’d decided to join me. I like that. 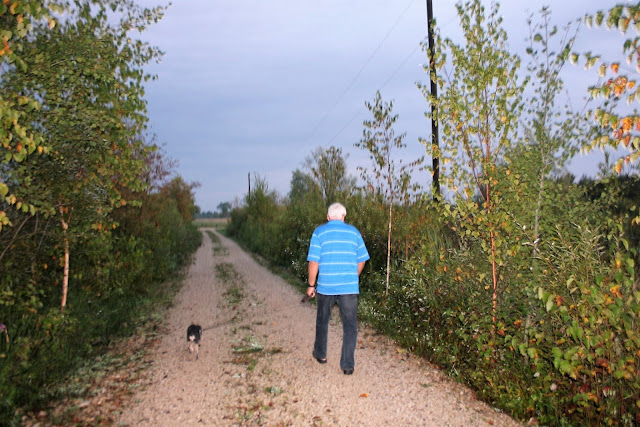 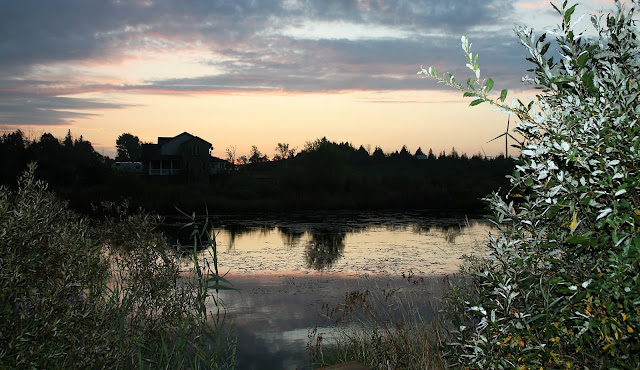 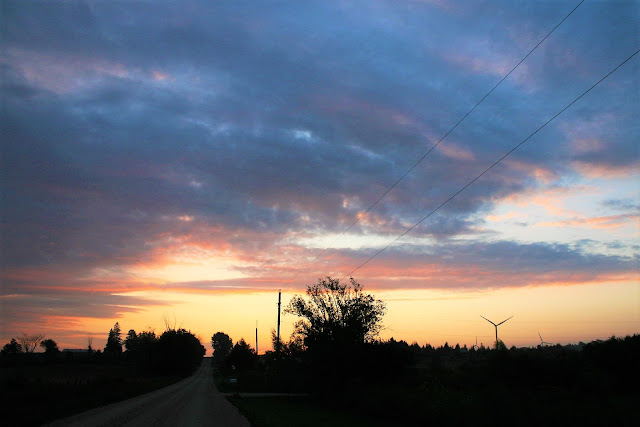 So, all three of us headed out the lane, down North Line and Baptist Church Road. Before we knew it, we arrived at the turbine lane and turned around for home. The eastern sky was performing its opening act with a most beautiful performance. I snapped numerous photos, each one seemingly prettier than the other.

We were back inside for maybe 15 minutes when we noticed our bunky guests were up as well. We sat and continued the chatter from the previous evening. There was no lapse in conversation, that happens each time we get together with Kathy and Derrick. It was around 9:30 or so when Bill lit the barbecue to grill the mini sausages. I prepared scrambled eggs and Pillsbury-type croissants inside.
Breakfast was great and I loaded the dishwasher for the second time this week. The sun made its way out and we felt like celebrating because we knew our clothes were finally going to DRY.
Walking around the Ridge, we showed them my garden, peony bush and Rose of Sharon which we brought from London. Yay! The flowers on ‘Rose’ were blooming and beautiful! Late or not, they finally arrived! 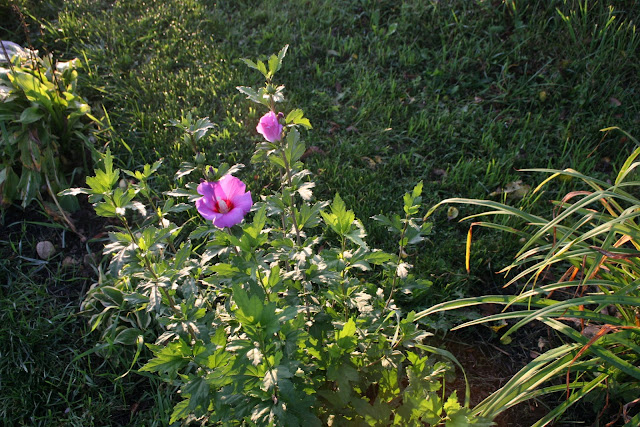 Derrick was telling us about the Park Assist in his Lincoln and Bill nor I had ever witnessed one of these in action. He was more than pleased to offer a ride in the vehicle while he demonstrated. This is awesome although it would take me awhile to trust it enough to allow it to parallel park my car.

After sitting outside for more chatter, and the Eaton’s catalogue got passed around, Derrick encouraged Kathy to finish packing up. They were soon on their way. It was around 1:00 when they pulled out heading back to the city. It was a short visit but a great one. No one wants to wear out their welcome so with the sun warming "Lincoln", they waved goodbye. Too bad there weren’t any turtles around for them to see. 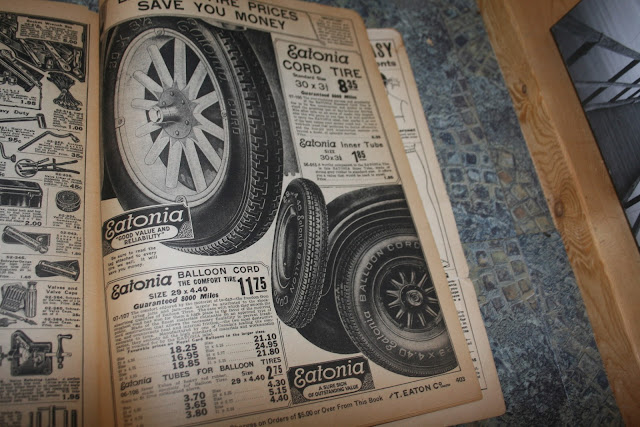 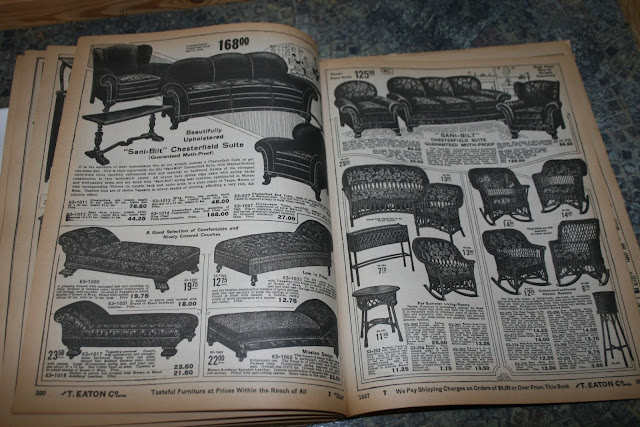 The rest of the afternoon, for me, was lazy. I read my book outside in the shade in between periodically checking the laundry. Eventually, lying in the hammock, I finished my book and the clothes dried. It felt good to finally get them in, folded and put away. That was a long process! Next time, I won’t be so trusting of the weather man. 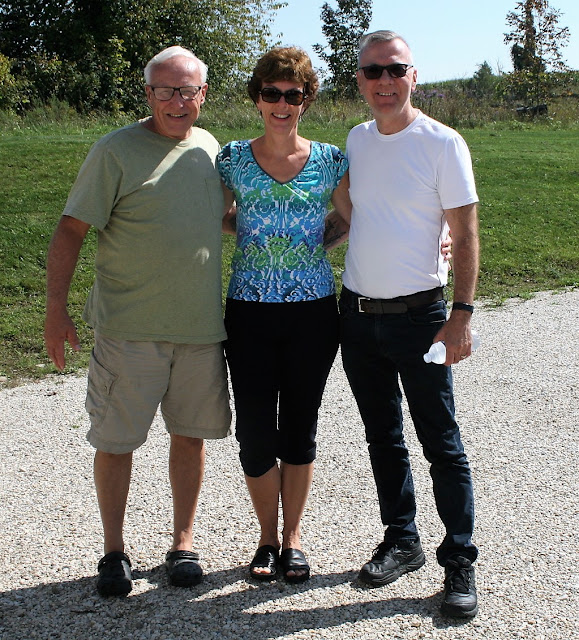 Bill puttered away with the shelving unit for his cargo trailer and I must say, it is quite impressive. He had a plan and with a tweek here and there, he has done an awesome job. I only needed to help him ease it into place inside. Bill is his own worst critic and when I see something really well done, he can still see where an alteration might have made an improvement.

The day was a great one, sad to say goodbye to friends but very relaxing in the aftermath. We had planned on a simple supper of burgers so Bill grilled those. All I had to do was get the condiments out with lettuce, onion, dill pickles and tomatoes. Now that is what I call a burger! We had two tiny pieces of the cherry cheesecake left from last night so that was our dessert around 8 pm.
Bill proceeded to fill his water bottles for the drinks he takes to London and I packed what he’ll need for supper. Phil texted and said that Airstream was treating the staff at CanAm to a barbecue so that sounds like lunch taken care of for tomorrow at least. That is very nice! Yes, Bill has 2 orientations Thursday and one, for sure, on Friday so I’ll say goodbye to him in the early morning.

We watched the episode of NCIS, recorded Tuesday night, as it was the last show of the previous season. Next Tuesday begins the new season and we wanted to refresh our memories where it left off. We love this show, probably our favourite, and can watch it over and over. Then we settled in for the Finale of America’s Got Talent. That was awesome and without revealing anything for those who haven’t seen it, our choice took the ‘gold’!

Thank you for reading today. Your comments are always welcome!
Posted by Patsy Irene (Chillin' with Patsy) at 6:22 AM