And Into One’s Life…..A Little Rain Must ‘Fall’. Getting Cell Phone and Internet Plans Set Up

When I woke on Wednesday, Sept. 27th I was grateful that I still had Bill home with me. Time alone is great, yes, but we miss him when he isn’t here. It was 6:45 and there was a lovely refreshing breeze coming in my little window, as it had been all night. I lay there for a while and got up about 7:15. Bill moved but it was Clemson who joined me. After letting him out and running a comb through my hair, I went for a walk. 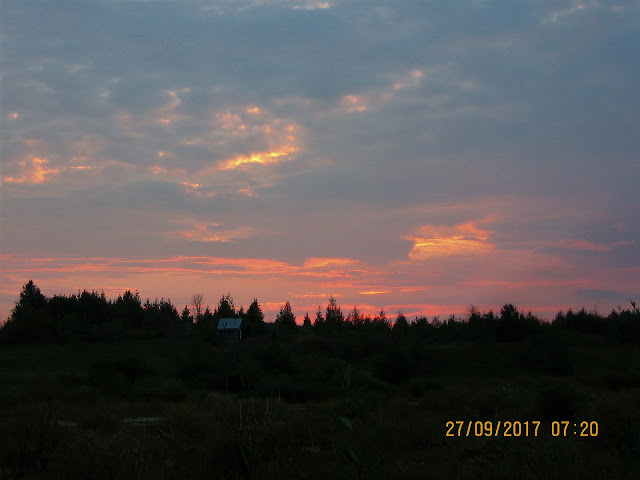 It sure was different at 7:30 am than what the day turned out like. Daddy used to say ‘red sky at night, sailor’s delight, red sky at morning, sailor’s take warning’. Today was the perfect example. No storms coming but within an hour, the sun was sucked up by the clouds and disappeared for the day. A light rain began by 9:45 and I went out and folded up our chairs to tuck them under the Suite. The temperature likely won’t get much above 20C today but it is a breather for everyone.


Bill was up with his coffee sitting at his laptop when I returned. He saw me coming up the lane and began brewing my tea. We read blog posts and did some online searches. I find with this crazy lazy memory of mine, I have to write things down throughout the day so I remember them. For example, if I’m doing something away from the laptop and think of an idea to search, a campsite, a recipe, a person or a Youtube, I write it down. 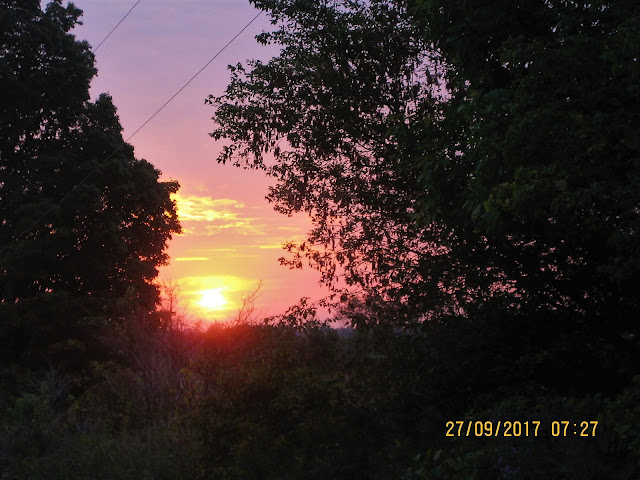 This morning, I went through about 4 of those types of searches. Bill is working on yet another project, I should call him Bill the Project Guy and be done with it. His ideas are great and once they come to fruition, they are valuable things for our lifestyle in one way or another. Today he is solving something more for me than for him and I didn’t even think of it! 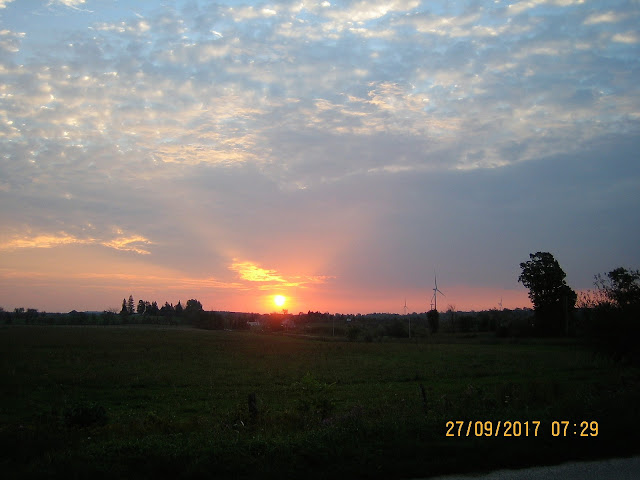 Picture our bedroom television, the cupboards on either side and the usage in both.
Oh heck, I will ‘picture’ it for you. The upstairs tv has the satellite control and a separate dvd player. I love that as it means I can watch movies if Bill is watching something downstairs that I am not interested in. So, in the picture you’ll see that my cupboard contains both these units. 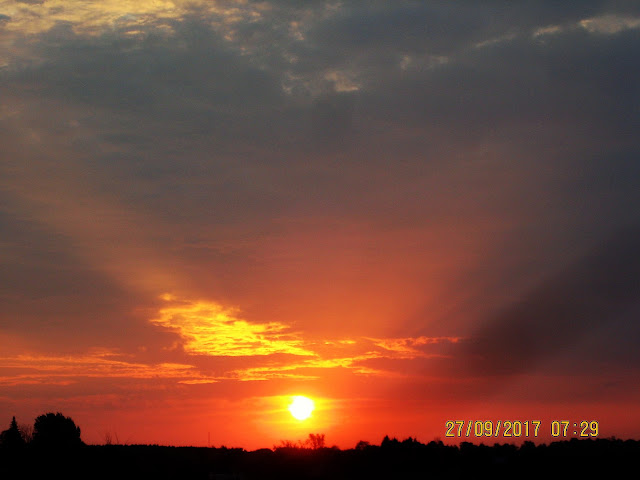 The problem is, and it is all about convenience here, that sometimes at night there is a possibility that I might grow tired and want to turn it off and go to sleep. To use the remote, and who doesn’t want to? the cupboard door needs to remain open so the signal gets through. I have to crawl out of bed to close the cupboard after turning things off. Otherwise, Bill, who comes up to bed after me, usually, or if I have to get up in the night, very rare, we could end up walking into the open door. Ouch!

Bill built a small, simple, lightweight shelf that will house the satellite box AND the dvd player side by side. This, installed under the tv shelf will firstly, give me more space in my cupboard plus it will allow me to turn the units on and off without having to get up out of bed and close the door. This will be an open shelf and the equipment will be attached with Velcro strips to hold them in place.

My job will be to stain the shelf. Easy peasy. Something else he can cross of his list. We’ve already bought the walnut stain to match cupboard colours as much as possible. Now he can move on to another job almost at completion. You won’t see the finished product today, but when it is finished, I'll show you. 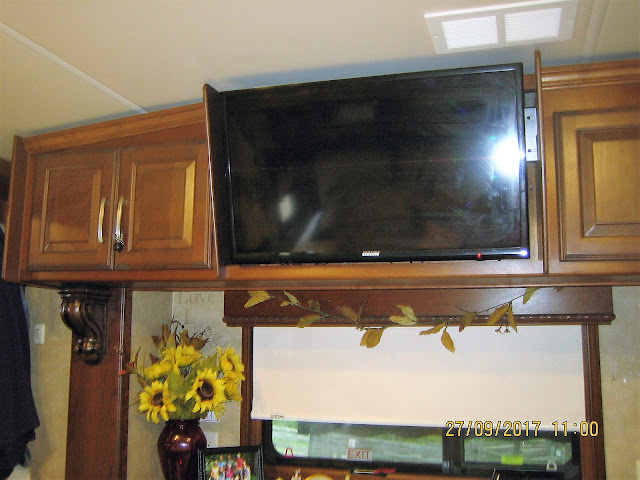 I dumped my indoor compost into the big bin outside and had a peek at the garden. Good for another couple of days before another plentiful harvest of wee tomatoes. I can tell by the amount left that another batch of soup will be in order before we leave.


When Bill realizes he is hungry around 11, he warms up the left over omelette I made on Monday or was it yesterday? I decided to make myself a Skinny Muffin in a cup and it was good. I should know off hand the recipe by now but I can’t seem to retain the details. LOL Anyway, it takes mere minutes to make one and I only had room for half. They are quite big.
We drove to Hanover to the Bell store. With the information that Bill got yesterday from Melissa regarding a new North American plan we have made our decision. When we found her tied up with another group of customers, she assigned a couple of other staff to set us up. This is going to be something for us to try this year and it will carry on for us throughout our time not only for winter months but also for our summer here in Canada. We both feel a relief with this decision and we’ll each have a phone and our same numbers. Yay! Currently, we still have our Bell turbo hub but not for long.

From there we drove to Healthy Computers on Main Street as well and Bill ordered a new battery for his HP laptop. The price quoted here was $70 cheaper than our last quote of $150 at Best Buy. Bill needs a new laptop but for the time being this will do since it isn’t in our budget right now. So, two more things off the list. It is this type of thing that takes time, phone time, research time and actual set up time. I don't think the job of packing things away and moving things to ready us for our move is as time-consuming. Just more physical strain.


One last stop at Rona for a couple of hinges and we were on our way home. It was interesting to see that the Sunflower field just out of Hanover was cut. We suppose they will plow them under so the seeds will re-sow for next year’s crop. I’m sure that isn’t what you call it, but you get my drift. The rain from this morning had stopped around noon before we left but the day continued to be cloudy. 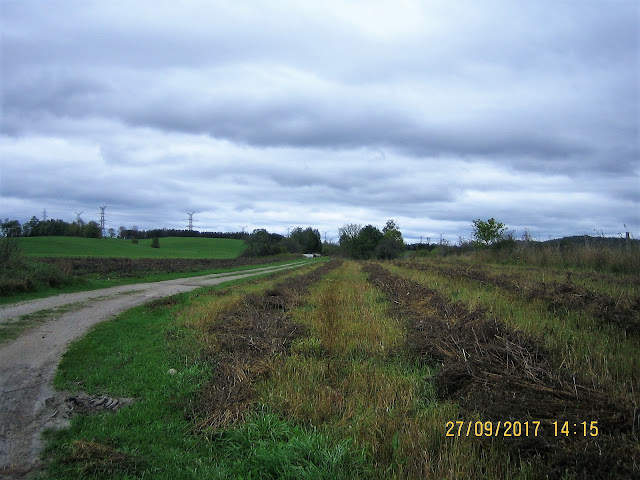 We both felt tired so we went upstairs for a snooze. I read a couple of chapters of Beach Road and finally closed my eyes too. I’m not always an afternoon napper and today was one of those days. I felt tired, reading, but my mind couldn’t settle long enough to drop off. No worries, the rest beside my guys was just fine especially knowing that one of them won’t be here tomorrow.

On the way back from town we stopped at the mailbox to retrieve the week’s flyers and was surprised to receive our birthday cards from Dad and Marilynne. They have a lot going on right now so none were expected. Thank you! With so much Social Media in our world, it is still nice to receive the real thing in the mail. Speaking for myself, I have certainly received a nice allotment of cards this way. 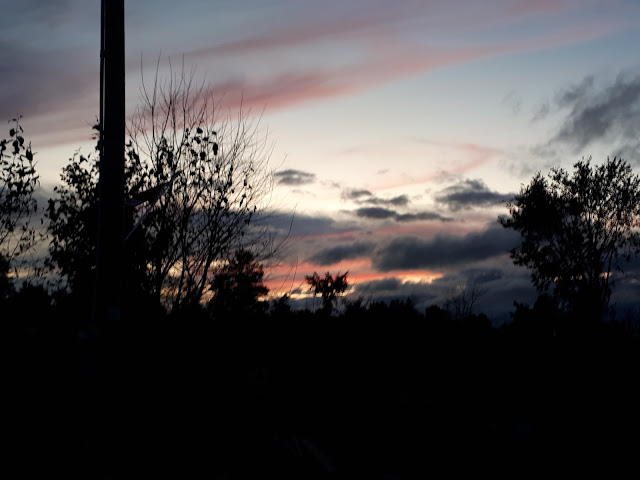 Thinking ahead as usual for Bill’s meals on the road, I dipped 2 large butt chops in milk and then bread crumbs for supper tonight. I boiled small new potatoes, steamed broccoli and nuked corn as well. It was a good night for an indoor meal and I must admit my small portion of the pork chop was quite tasty. I neglected to get a picture, woops! Trust me, it was a nice meal with left overs.

We cleaned up dishes and Bill prepared his drinks for the next two days. This little bit of prep saves us big time dollars and he at least is in control of what he eats this way. A sausage in a bun will be his lunch either for tomorrow or Friday and he’ll take cereal for his breakfast. 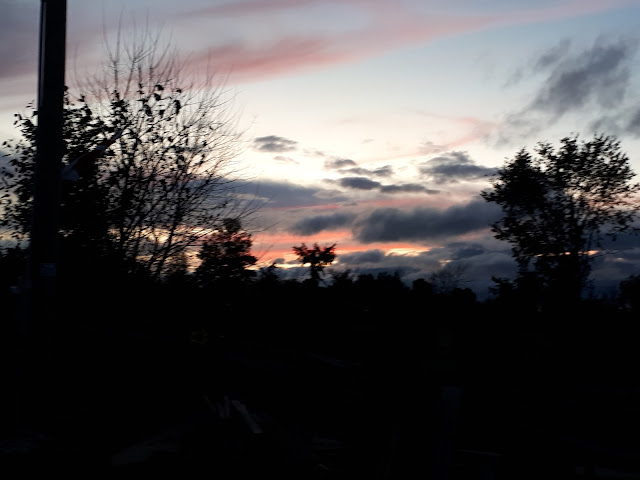 I took a peak out the window and one minute it was a normal looking sky with neatly positioned clouds and the next I saw this beautiful landscape off to my west. The black ones are off to the north. Superstitious? Well, I see that red sky at night and I know what that should mean! This has been a very productive day for us. I hope you have had a good one too!

Thanks for your visit. I’d love to hear from you.

Posted by Patsy Irene (Chillin' with Patsy) at 7:19 PM