On Thursday, Aug. 31st I was awake far too early for no reason. I refused to look at the clock in the hopes that I would drop back off to sleep. It was still dark out, no light through the blinds. After tossing and turning for what seemed a long time, I sneakily checked the time and it was only 5:30. LOL Roll over. At 6:20 I gave it up and got up. Clemson joined me to go out and then he went back to bed with Bill. 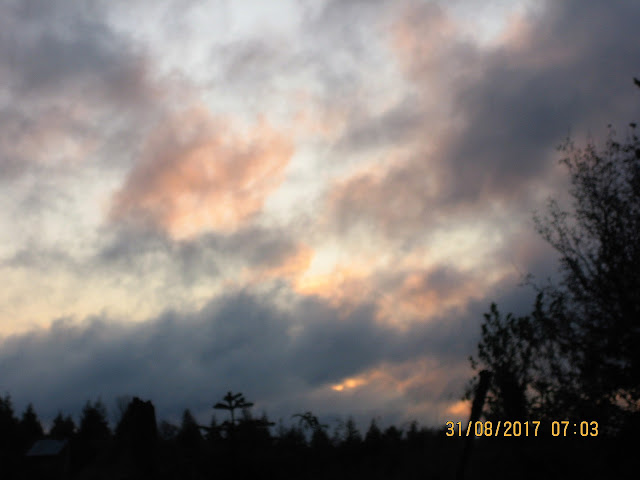 What a cool morning at 11C made even more so with the early wind. There were low-lying clouds winning the battle over the rising sun but it was pretty all the same. We’ve been ‘unplugged’ from electric for a couple of days and I didn’t want to plug us in yet. The sky was showing some promise for clearing. After reading posts and Bill joining me around 7:15 we turned the Keurig on and had our tea and coffee.
Nothing major on the agenda but Bill went to The Acreage to get water shortly after 9. Our fresh water tank was registering around the 25-gal. mark. With company coming tonight we want to have a full tank. I tidied up the Suite, dusted and swept while he was gone. Brenda and Randy will not be arriving until around 8:30 or 9 because she was scheduled to work today until 4:30 or so.

I went for a walk down the lane after Bill got back and was happy NOT to see Mr. Skunk. I hope he has moved on to other territory. The flyers arrived yesterday so I knew the walk would produce something in the mailbox. Bill has his pile to go through and I have mine so when I brought them back I split them up. It was 12:30 and since I hadn’t eaten yet, asked Bill if he was hungry and what he would like.
We decided on tomato soup for this cool day with cheese on the side. Bill has been busy studying for his AR license as it is no easy thing, remembering all that you have to say at the test phase. It is still very frustrating that he has to do this just to pull an RV, when 80% applies only to transport trucks. He is determined and a smart guy. I fully support him in his decision to follow through one more time for this upgrade.
I cleaned up the dishes and checked my laptop on an update I was installing. Our Rand McNally Good Sam GPS has been advising we update for a while now so I finally remembered to bring it in the house and download it. The installation took 45 minutes which seemed to zip by.
We decided to ‘test’ the air mattress in the bunky by having our afternoon snooze out there. It threw Clemson for a loop but he settled down eventually. Our friends will be sleeping out there and sometimes the air leaks out. The mattress definitely needed some air so we topped it up with the pump. That will be better for a good night’s sleep. It is also going to be a cold night, going down to 5C in the wee hours of the morning so we will plug the portable heater in and turn it on an hour before they arrive.
Around 7 we saw a car coming up the driveway and we remembered that my cousin, Harvey was coming for a visit. He has been teased ruthlessly about his name with all of the crazy stuff Hurricane Harvey is doing to Texas. He is no threat to us, ha ha. We went out to meet him and everyone of us had to slip on our warmer jackets against the cool and the wind. Brrr, feels more like October!
We showed him around the property, the bunky, restroom and Bill’s cargo trailer with contents. Then we moved into the Suite, which he had never seen. The boys went inside and I took a couple of sheets up on the hill to cover my garden. There is a very slight chance of frost tonight (in August!) so I’m taking ZERO chances that the tomatoes I’ve nurtured will get ‘bitten’. Better to be safe than sorry. 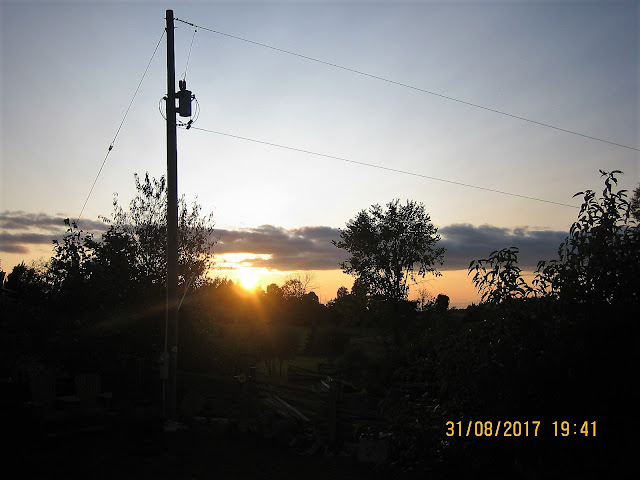 We sat inside for awhile and by 8:20 our company was coming in the lane. We said our goodbyes to Harvey after introductions and greeted Brenda and Randy with big hugs. It is so nice to see them. We were originally disappointed in the shortened time they were coming for but we sure made the best of the evening.
Inside with wine and rum to warm our innards, we chatted and laughed sharing our trip stories south and theirs to Cuba. It was just before 1 am when we all said goodnight and we lightened their path to their ‘cabin’. They love the coziness of the bunky which makes me proud of the things I’ve done to make it homey. With the heater turned on we hope they will be warm enough.
We make the best with what time we have, don’t we? With a full day tomorrow together we wish you sweet dreams! Another great day!


Thank you for stopping in.
Posted by Patsy Irene (Chillin' with Patsy) at 7:00 AM