I woke up on Thursday, Sept. 7th at what I believed was 5:15 am from looking at the clock over there on the dresser. I noticed Bill was up, assumed he was in the shower and rolled over. Within 2 minutes, Bill was crawling across the bed to give me a goodbye kiss. It was 6:15 so obviously my eyes were blurred on my first glance.


I stay curled up in bed and watched the car pull away from my window. Bye, Dear, travel safe! Clem decided he wanted to go down to the couch and I dropped off, kind of, until I got up at 10 after 7. Opening the blinds, I see the sun draping the landscape in a dewey splendor. It would be easy to make my tea and sit down, as a matter of fact I do it often. Today with my positive angel on my right shoulder, I was convinced to put my running shoes on, a hoody and a wind breaker instead. I took my camera and ventured out for my walk. 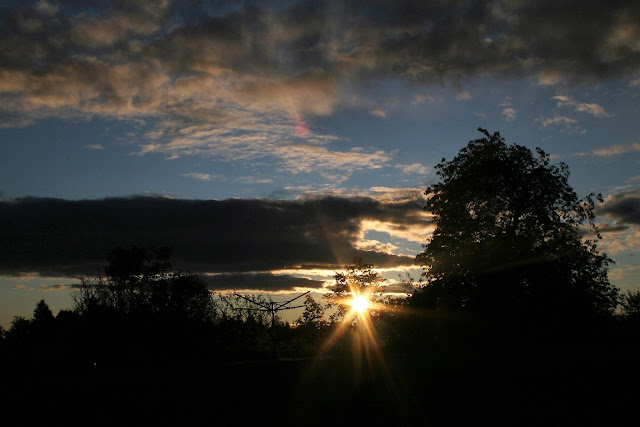 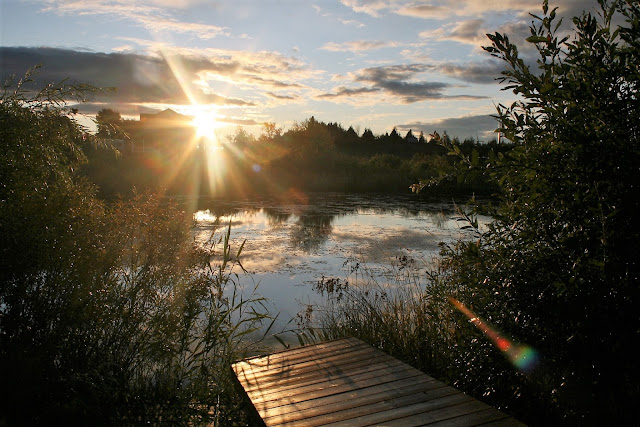 Clemson barely noticed that I was leaving and with it being only 8C I knew I would be walking quickly. He can go with me later for his exercise. The wind was hardly noticeable and I once again had a great walk down B.C.Road to the turbine. I was a little earlier today and the school buses didn’t pass me on the road at all. Not until I was up the lane to my flower garden, did I notice them go by.

Checking the weather network while my tea was brewing I see that we should expect 80% rain so I won’t plan on taking my bedding into town today. I’d like to wash the 3 sets of sheets for our beds and hang them out on my line. Also the duvet cover needs to be laundered. There is more gardening to do in my flower bed, weeds that need to be obliterated but not sure if I’ll get to that.

Today is tomato day. Definitely! I had my first tea and read blog posts. I played my Scrabble and Words with Friends games and checked what people are doing on Facebook. This is a special day. My middle grandson, Jake, turns 20 today! He is a very smart, talented, handsome young man and we are all very proud of his accomplishments in his young years. Happy Birthday Jacob!
Bill called at 8:45 to announce his safe arrival in London so that is off my mind now. Donna and Gerry are also venturing to London today so the many staples in Gerry’s incision can be removed. He will be happy to then move on and get back into a routine, getting used to normal movement again. Every day now he improves.
I donned my apron and began following the recipe for Homemade Tomato Soup. I’ve never made this before so it is an experiment for sure. Tomato is Bill’s favourite soup but we are talking about the canned variety which we all know is usually loaded in salt. So, my fingers are crossed that he likes this one! I never worry about what I will like, my tastes are far different than his and I know I will enjoy it.
Today, I am going to take you through step by step as I follow the recipe because after all, I do have your rapt attention. Feel free to skip the next four or five paragraphs. I peeled and diced a small carrot and a medium onion. In the pan I heated a couple tablespoons of olive oil and added the veggies to a low heat. It took about 12 minutes for them to soften enough. I cut up the 4 medium sized tomatoes and quartered them, cutting out the hard core.

Once softened, I added 2 teaspoons of tomato paste to colour the carrots and onions.

Then I added the large tomato quarters to the pot of veggies and oil and kept the heat on low for another 10 minutes.

I ground fresh pepper and added a sprinkle of sugar and a couple of quartered bay leaves. The tomatoes also softened and I could see the juices oozing throughout.

In the meantime, I boiled 4 cups of water and mixed it with 4 bouillon packets before adding it to the pot.

I cooked this on High with the lid off until it came to a boil then stirred, added the lid and returned the dial to Low.

The instructions say to leave this for 25 minutes, stirring a couple of times. Now, a break so I sat and finished my second tea while reading a bit.

The timer I set on my convection/microwave oven went off and I turned the burner off. Yay! Almost done!


I ladled through the soup with a slotted spoon and removed the pieces of bay leaf. I recommend that you count the pieces you put it at the beginning, since you aren’t placing a whole leaf in with this recipe. I had counted 7 pieces and was sure to find them all.

Into the blender in two lots, blend for 30 seconds, remove lid and check and then continue blending for about 1 minute. Pour into a large serving bowl when finished.

I was so excited to taste it, it looked amazing! Well, let me tell you, I do think that Bill will like this. Without the salt, everything in this soup is nutritious, not too heavy on carbs and if you wanted to make it creamier you could add cream through the blending process. 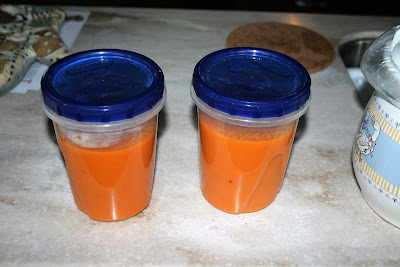 I have 6 cups of soup that can now be put into freezer containers and frozen for up to 3 months. This was an easy recipe to follow with the only use of power being for the 2 – 3 minutes of blending. Now I know what to do with all of those little tomatoes in my garden IF we don’t eat them all up before we leave. Tomatoes are a fruit that cannot be taken across the border unless they are cooked. No problem! 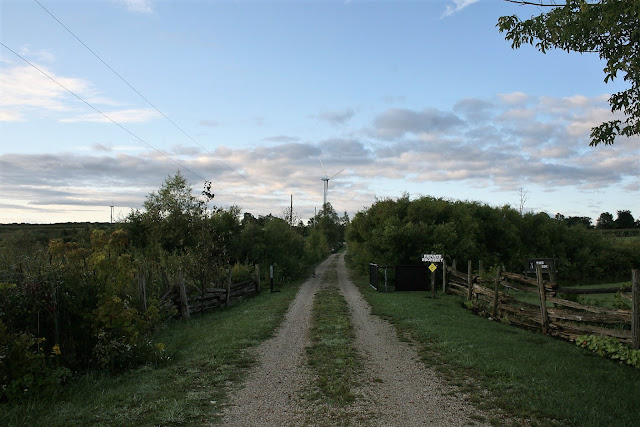 Cleanup was also fairly easy as I tend to wash dishes along the way, during the whole process. It was 11:30 and the rain started soon after. I had plugged us in just in time because I’m thinking that was the last of the sun I’ll see today. After putting dishes away, I made a note on the hard copy of the recipes that they were excellent for future reference.
Both the Apple Sauce and Tomato Soup get an A+. Clemson was undisturbed for the most part while I was cooking. If I made a loud noise or when I was reading aloud or talking to myself he would lift his head to see if I was okay. Mentally and physically.

When at the doctors on the 28th I left with all of the regular pieces of paper for tests. The urinalysis and blood work are done right down the hall at the clinic so they were taken care of immediately. There is always the dreaded Fecal Occult Test and this time I promised to take care of the Mammogram. Usually, he sends it home with me and I put it off for months and then toss the paperwork out.

My good doctor knows I don’t necessarily want to do them, part of me believing they do more harm than good. It has been about 5 years since my last one so I told him I would get one done before heading to the southwest this winter. I have called and made an appointment in Hanover at the hospital so feel I’m doing the right thing.

We talked Colonscopy too but he isn’t pushing that for a couple or three more years. It has been 5 years since I’ve had that done with perfect results. With the Fecal test, if fine, it will prove that we can wait for a few more years. Good.

Again, how much do I believe they’ll find the ‘bad stuff’? I know my brother, Bruce, will forever be an example in my mind. He had a positive result (meaning a good one) nothing showed up in November/10. In January of 2011 with his appendectomy, they found the ‘bad stuff’ on the outside of his bowel. Nothing is for sure, you know?

Tomorrow I will drive to Hanover and drop off the Occult test at their hospital on 7th Street and I want to drop in at Mark’s and see what is going on there. The windows are boarded up and there is a dumpster on site. Bill and I love that store and are hoping there are just major renovations taking place, not closure. I’ll check it out.

So, with the weather being what it was, rain then sun then rain then sun, I stayed inside for the rest of it. I found it quite satisfying to sit in my chair and read my book. It was so hard to put down so it worked out perfectly. Clemson seemed out of sorts well before his supper time and then even after I fed him at 5 he couldn’t settle down. From his actions, I’m sure he was waiting for his Daddy to come home.

I ate my supper at the same time as Clemson had his. I was hungry so heated up a bowl of my homemade hamburger soup from the freezer with crackers and some cherry tomatoes. It was enough and it was delicious. I forgot to mention that Bill called me around 4 to report that he had completed 2 orientations and had a third one about to start soon. It was going to be a later night but he was fine with that. Sometimes it works out that way. 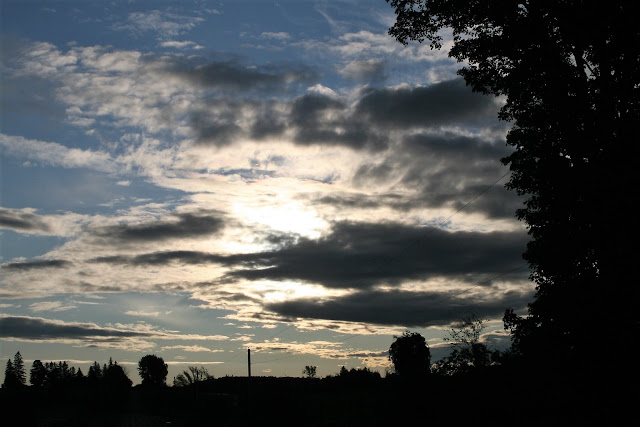 Then again at 7 he called saying he was done for the day. We chatted briefly and he spoke to Clemson on speaker phone. Of course, that probably just added to Clem’s confusion as he looked towards the door of the Suite. Our little guy finally settled down around 7:30, nestled to my side and I was finally able to finish my book. His fidgeting made it difficult to concentrate on the pages.

This was a different kind of day, but it was fine. I do hope that tomorrow turns out a bit nicer so I can hang some laundry on the line. I hope you have had a great day wherever you are.

Thank you for taking the time to read today. I enjoy your comments.
Posted by Patsy Irene (Chillin' with Patsy) at 7:21 PM