Bill and I were up on Monday, Jan. 28th by 7. This morning mimicked the past few days with the outdoor temperature hovering around 47F/9C and very little winds. These are nice mornings. Bill and I sat together and read our friends’ blog posts and Bill had a coffee. I waited as I wanted to get my walk in before having my cup of tea. There were a lot of clouds first thing and I wasn’t too hopeful for the forecast of 74F/23C.

Clemson got up out of bed (after waking Bill at 1 am to go out) around 7:30 and once that business was taken care of, Bill said he’d go on my walk with me. The sun was already up so there are no sunrise pictures but still some pretty skies. We noticed that a lot of the Bluebird group had left, leaving a big void in the middle of the east section. The show was over and they usually leave very soon after along with many other rv units.

When we returned from our 2-mile walk, George had texted Rob and told him that the Office was open and they were issuing permits.  So, Bill and Rob drove up to get ours for $40. This would allow us to stay for 2 weeks, if we wanted to. On the way back, Rob filled his water bladder so they could top up their fresh water tank and then they made one more trip to do the same for Bill. We were good to go and hope not to have to dump before Friday. The stickers were applied to the window on the Suite and on Black Beauty. 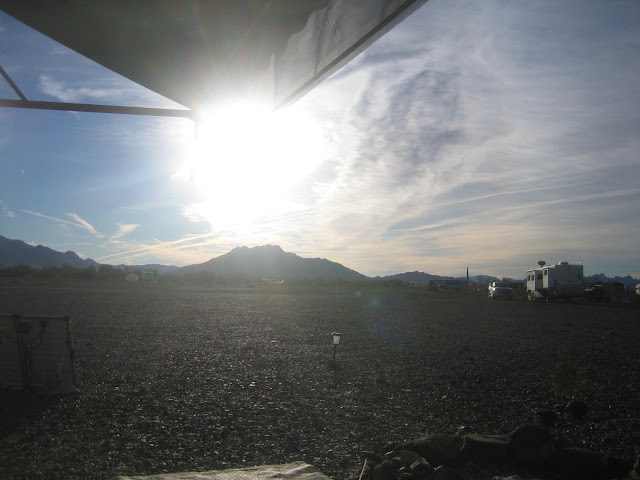 While that was taking place, around 10, I had a text from Deb and Riley from On a long and lonesome highway. They were taking a chance that we were around as they wanted to stop in and squeeze a visit in with as many of our group as possible while here. Deb brought me some grapefruit and Riley brought me a bag of novels with a smile on her face. She was happy to move them out of their Igloo. When Bill and Rob returned, Bill joined us and we caught up with the ladies and what they’ve been up to this winter.

We wanted Rob and Pat to meet them so informed them and Deb and Tom that they were here. It was a nice visit and after spending time with George and Suzie, we all wished them safe travels as they continued their winter journey. I had picked about 6 books out of the bag for our reading pleasure and returned the remaining ones to Deb. I think her plan was to drop them off at the main office on her way out. It was wonderful to see them again.

For the next couple of hours, we relaxed inside or out and Bill dozed for a bit until it was time to get ready for supper. At 3:30 we took two of the smallest vehicles, George’s car and Tom’s Jeep, piling 5 in each one and drove to Quartzsite for Silly Al’s pizza. There is never a lot of space for parking so the big trucks were best left behind today. We arrived just before 4 and met up with George and Rose at the front entrance of the well-known venue. Remember, if you haven't eaten at Silly Al's, you haven't experienced Quartzsite.

We were the next group waiting in line and the waitress offered us 3 tables of 4 immediately or 1 table for 12 which meant an indeterminable wait. We took the 3 bar tables and Bill and I sat with Ken and Kim. There were 4 of our friends who had never been at Silly Al’s before so we were anxious to see their opinions of the pizza. Bill and I ordered a split medium, Hawaiian for him and Meat lovers for me. 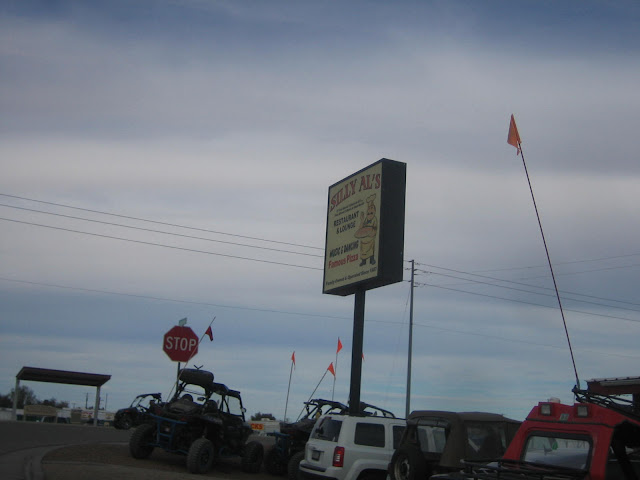 They were both delicious and we know Kim and Ken loved theirs as well. We were giving up our tables to other patrons by 5 and hopped in the vehicles for home. Well, next thing I knew, I saw Kim pulling her chair out into the middle of the circle and Deb and Tom joining her. I guess we’re having a late Happy Hour! Yahoo! Within minutes, all 10 of us had gathered one more time. The winds had died right off and even though there was no sun, we were experiencing mild evening air.

We sat for maybe 40 minutes and I showed the girls my Corking project. Deb and Kim had never seen this hobby before so I was happy to show them how to do it. We took turns capturing the western sky perform for us on our phones and cameras. 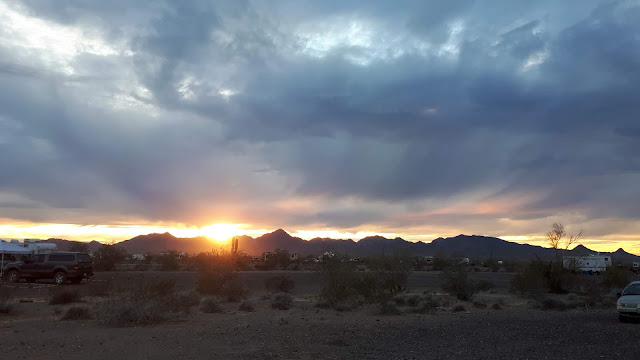 At 6 or so we split up the ‘party’ and went our separate ways. Monday night meant television for us with programs like Magnum PI, The Good Doctor, America’s Got Talent and Murdoch Mysteries. Some were recorded and others we watched. 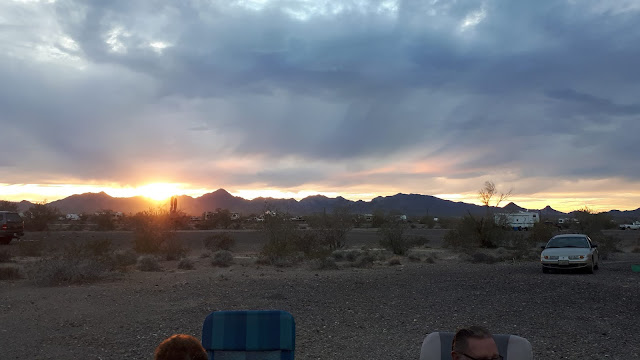 This was a fun day, time for relaxing, visiting and eating. Thank you for stopping by!

Posted by Patsy Irene (Chillin' with Patsy) at 9:07 PM