On Friday, Jan. 11th, Bill was up with Clemson to go out at 10 to 6. They took longer than expected and sure enough we needed a little bath again. I hopped out of bed to help Bill at the sink. Nothing to serious, just some attention needed. He patiently let us clean him up, then he went back to bed with Dad. I hopped in the shower at 6 and blew my hair dry. Bill was up soon after and had his own shower.


We read some blogs together while I waited for daylight to begin its journey.
I had a nice walk, with mixed feelings because I was happy to go and see new, yet familiar places and at the same time I was saddened to leave the park. When I rounded the midway bend, I met Dorothy and we said goodbye. She indicated that she would miss seeing me on morning walks and wondered if I had a picture of Bill and I like Loree did of Freddy. I gave her one of our RV cards. When I returned, I made a tea and sat with Bill for a few minutes.

At 8, I poached us 2 eggs each and made the toast. This was more than we usually eat but it was delicious and would fill us for the morning. The remainder of our packing up didn’t take long with Bill doing his outside stuff and me inside. I brought in the slides and stepped outside on time for Don and Carolyn to wander over. Don really appreciated the Kilroy Was Here rock I painted for them and hugged me a thank you. He said he would treasure it always. I won’t test him on that, it is just more ‘stuff’. 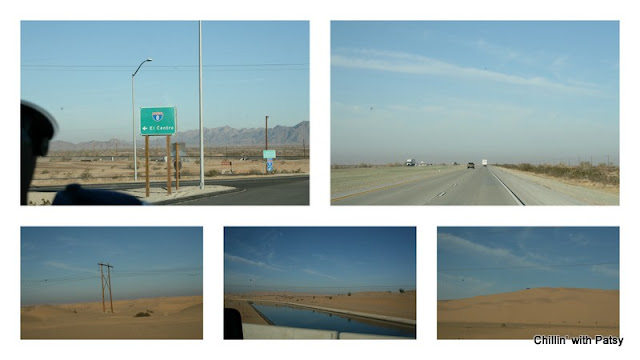 Carolyn thanked me for the birthday card. Don hadn’t found the 2 small rocks yet but it wouldn’t take long after we left and I know he’ll laugh about that. Rob and Pat came over and we all said our goodbyes and gave hugs before we pulled out of the park. It was 9:06 MT, 8:06 PT so we were right on our time schedule. It was 50F and sunny. Bill led the way and we had a smooth drive down I-8.

As we drove through the dunes, I pictured not 4-wheelin’ but sled sliding down those smooth hills. The ones with no grasses or shrubs around remind me of the Egypt pictures I’ve seen. They are so pretty even without the camels! We took Exit 118B onto 111N and eventually turned onto CA86/CA78. We meant to stop at the Pilot/Flying ‘J’ to get a Dunkin’ Donuts coffee but Bill and I missed the sign and turn off. I expected it to be on the highway but you had to turn left. Watch for it if you’re going that way and need to stop.

We stopped in Westmoreland, the next little town, at a Napa store so Bill was able to get coolant for Black Beauty and we all were able to utilize Rob and Pat’s facilities. Back on the road at 9:45 and within 45 minutes we turned onto S22/Salton Sea Parkway for 20 miles. This is not a pleasant road, although paved, it feels pretty rough and you need to slow right down in many sections. I don’t think many of us minded too much as the views were amazing. Now I remember! 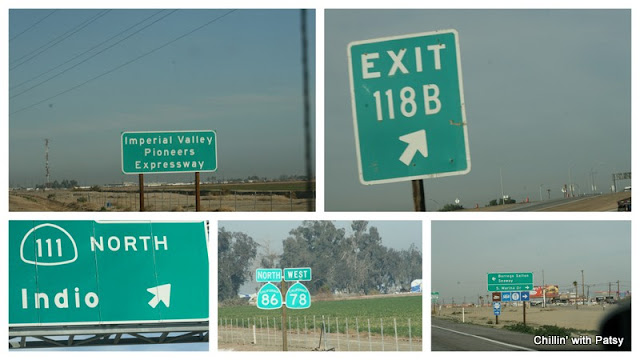 We found Rockhouse Trail easily and turned in onto the, again, rough gravel roadway until we found a spot, almost dead centre completely void of most other rv’s.  With Rob approximately 75’ to our west, we were both facing the sun’s daily orbit.

The guys did the reverse of what we did to pack up outside and we girls did the same inside. By 12 noon, I was finished and walked around taking a few pictures while Bill tilted our solar panels on the roof and set up the satellite dish.

We were able to bring in the signal to 89% fairly quickly and that was the last ‘chore’. It was 12:30 and we both needed a snack so we had some crackers and cheddar cheese. That hit the spot. The temperature has dropped off a few degrees to 66F since the sun disappeared so I changed back into my long pants and decided to go for a walk. I invited my buddy, Pat, to join me and I left Bill doing some laptop stuff.
We walked east toward the dry lake bed and I left it up to Pat how far and for how long we’d walk. I could go and go because I walk every day, whereas Pat is just ‘trying’ to get herself moving more. Today, we moved and walked about a mile down the gravel road and back again. The weather changed from cool and cloudy to hot and sunny and we were shedding our jackets on the way back. I couldn’t wait to get my shoes and socks off and into my shorts upon our return.

Rob and Pat invited us to join them for a tea or drink at 3:30 (old time) and 2:30 (new time). I think our bodies need some adjustment to get used to the Pacific time or else extend our happy hours. Well, as Rob says, maybe we’ll just stay on Arizona time for the week we’re here just like Clemson! We were enjoying our time in the clouds (I was back in long pants and hoody) when Rose and George, our Lake Havasu friends, messaged us that they were an hour away.

It was nice to have them come and join us all here for a few days before we make way for Quartzsite. The weather isn’t sounding too great anywhere for the next week but we’ll make the best of it and see what we came to see. Within the hour, we saw the motorhome come along the Salton Sea Parkway and turn into the camping area.

This area is located amongst the Anza-Borrego Desert State Park but not IN the park. We are on a smaller designated private piece of land owned by the Avery family. For some reason, they have chosen to keep this property and open it up to visitors like us, encouraging business to Borrego Springs.

Rose sat with us while George got the coach parked and set up. That was his instructions even though it was his birthday. We parted ways when the air cooled down and I made spaghetti for supper. It has been a while since we’ve had it and it tasted pretty good with some leftovers for another night. After dishes, we walked over to Rob and Pat’s for a group game of 6 handed Wizard.

It wasn’t my lucky night but it wasn’t a complete loss either, I wasn’t on the bottom of the score board at least. We had fun and played a couple of games. I hope George enjoyed our part in his special day. It was 9 pm (new time) when we came home for the rest of the evening. It felt later and I guess that is because we added an hour to this day. I wrote my blog to finish it off and then we went to bed. In the morning, I’ll decide on pictures. I took a lot today.

This was a good day, waking up in one park in California and going to sleep in another part of the state. We aren’t liking the forecast for the next few days, all of us counting on some solar power but we will take what we get since we have no choice. I hope you’ve enjoyed your day too.

Posted by Patsy Irene (Chillin' with Patsy) at 7:20 AM