Black Beauty Gets Looked After, Quiet Afternoon on a Lovely Fall Day

So, on Friday, Sept. 25th we were up shortly after 6:30. We’d made an appointment for the truck to go to the shop for undercoating and an oil change that was due. We had our tea and coffee before driving both vehicles to the other side of Durham. Leaving there, we stopped at the bank to put some cash in and then stopped by to visit our buddies for half hour – or so. We caught up on our week and theirs at Rock Glen.

Their son, Trace, was in for a visit too so it was nice to see him again. On the way home, we stopped at Mitch’s for a few minutes to help him with his phone. I’ll do what I can to keep him from tossing it across the yard! Ha ha, he isn’t overly phone-knowledgeable so I don’t mind lending a hand if I can. He offered to pay me for an hour but I declined. 😊 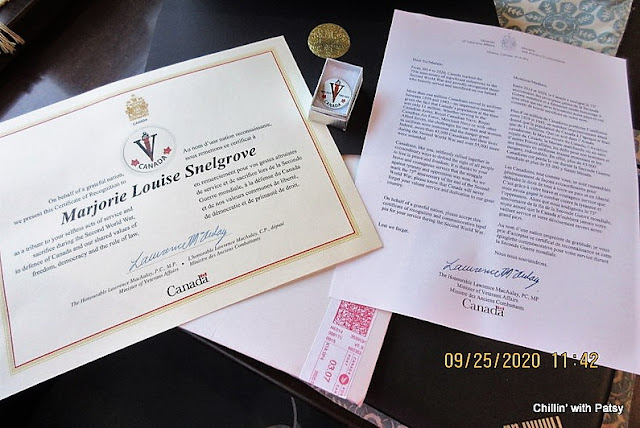 Back home, Bill went to the Hangar and got his Stinson Reliant out and running. Inside, I swept the floors and caught up on some blogs before driving to Priceville, east of here on #4 highway. Just a 10-minute jaunt to the post office to pick up a parcel. Turns out the pkg was for Mom and as special and momentous as it is, it is almost too late for her. It is a certificate and pin from the Veteran's Affairs, thanking her for her service in the Second World War. She won’t appreciate it now as much as she would have a year ago even. I will tuck it away in her file box.☹

I didn’t feel too ambitious so just enjoyed catching up on my emails. I had received a few these past few days with keto recipes or easy craft patterns that I wanted to copy into my Word folders. They take time at the laptop, removing all the garbage parts/ads on the page. With that done, I went for a walk down the lane to see if the mail lady left anything. I didn’t even see her go by – if she did. It is Friday and she tends to skip us. I put a complaint in to the postmaster earlier about my 3 missed pickups this summer. “I’ll speak with her”, she said. LOL

We just hung around home for the afternoon. I’d left my garden sheets on the line while we were away so folded them up and tucked them in the storage shed. I’m not expecting frost for another week and by then the sick looking plants will be finished feeding the tomatoes and peppers. I’m thinking about entering our pumpkin in a contest. What do you think? I'm positive it is a gold star winner!

On my walk to the mail box I was treated to a small Yertle crossing the lane upon my return. She/He was wet from the pond water and I just squatted down and we had a little chat. Other than blinking eyes, the little visitor was very quiet and patient, waiting for me to move on. At the top of the lane, I glanced back to see they had finished their trek from one side to the other. 😊 Bill came up from the Hangar and suggested we go to Pletsch’s to see if the truck was done.

There had been no phone call so probably not but with Paul, you never know. It wasn’t out when we drove over so we carried on to Murray’s, closer to Hanover. His barn is where we store Ptooties for the winter but since that won’t be happening, we want to see if Bill’s cargo trailer can go in the barn in her place. Murray said “No problem, that’ll work!” He said he would have saved our spot for next winter regardless but this way it is safe and he gets a bit of winter $$.

We stopped to get Black Beauty on the way back and met back at the Ridge. I can’t believe how warm today is. A summery 24C/75F with gorgeous blue skies. We weren’t on the ball earlier and neglected to unplug from power. Woops! I realized that I’d forgotten to pay Donna our rent $ on the 21st (too much other stuff in our heads, I guess) so took care of that this morning. We’ll need to do better in Paisley! Haha This will be our last payment for Ridge rent this winter. We wish it was for the same reason as usual.

I’d picked up some farmer’s sausage at the bakery/meat store in Priceville this morning along with some ooey gooey butter tarts that the Amish make. I’m so bad!! Anyway, we’re having the sausage tonight and hope we like it. The butcher that they came from is in Mount Forest and we could stock up a bit if we do. The tarts got tasted immediately and they win hands down for a sweet afternoon snack. LOL

Bill has a big day planned for tomorrow so went down to load up his cargo trailer or rather to make sure his planes are secure and charge the batteries for his various flying machines. 😊 Soon after, he pulled up with the cargo trailer in tow, all hooked up and ready. We had bbq’d the sausage and enjoyed it very much. Inside, I fried up a few leftover potatoes for Bill and some leftover veggies for me. It was a very good meal.

We hadn’t done dishes earlier and there were enough in the sink, so I loaded the dishwasher. It needed its 'run through' for the month.

We slipped into some warmer clothes and drove over to enjoy a fire with Donna and Gerry at the Acreage. Mike was also out so it was a nice evening with the 5 of us and a great, warm fire. It wasn’t really cold out but when you stepped away from the fire, the dampness could be felt and the grass was wet with dew. No rain, Donna said, a wives’ tale that she swears by. 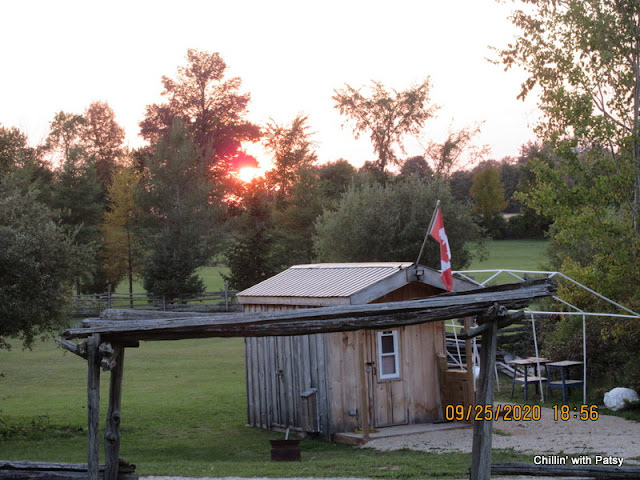 This was another nice day here in our neighbourhood and the truck has been looked after.

Thank you for checking in to see what we’re up to. Your comments are always welcome!

Posted by Patsy Irene (Chillin' with Patsy) at 7:15 AM