Catching Up with the Blog and with Friends

On Tuesday, Sept. 22nd we got moving around 7 and had our morning drinks. Todd showed up at 8 and started to work again. We left him around 8:30 and drove to the flying field. No member can fly their remote-controlled planes before 9 so Bill set about putting the wings on his Piper Cub and getting set up. I pulled out the bagged chair from the back seat and sat with my book. The sun was up there but a bit hazy for the first half hour.

Then it warmed up nicely and I was quite comfy reading my book in just a t shirt. When he was ready to fly, I followed him out and took some videos and still pictures of his take off, flying and landings. I didn’t have good walking shoes on since I’d dressed for the day’s visits instead.

Down the road to the right/east to the STOP sign and back again. Bill had 3 good flights within the two hours we were out there, again on our own. As we were packing up, another member arrived for some flights as well.

From there, we decided to come back to the Suite for some lunch and spent about an hour and a half putting in time while Todd worked on stabilizing the fridge. That was a challenge since the fridge is so heavy. We left around 1 and went to Value Village. Bill dropped me off and went to Princess Auto so I could wander freely. It’s funny that I don’t look for clothes anymore. I need to do a good clean out of my closet while packing for the winter and maybe then I’ll do a swap out. 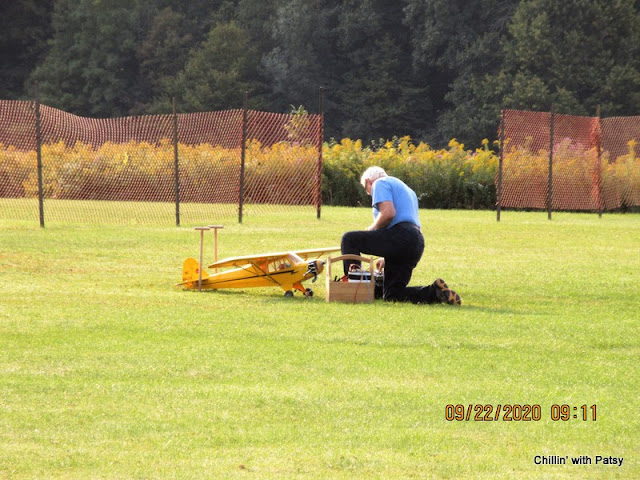 Instead, I like to wander down the kitchen areas and knick knacks to see what ‘handy’ things I could use. I found a few crafty things that I can hang in the Bunky and some coloured stones for a project – yet to be determined Lastly, I found a pair of warm sleep pants for at the Paisley house. Something I’m comfortable wearing around people first thing in the morning. The bonus was that it was a Tuesday, so seniors’ day and got 30% off everything. $11.25 later, I met Bill.

We haven’t been to our former workplace for a couple of years so thought we’d kill a bit of time today doing that. It is never as fulfilling as you think but there were a few nice surprises. Kim nor Deb were in (again) but I was happy to see Eric and throw a virtual hug. They have rules to follow so I didn’t push it with him. We searched out Saira (where we snuck in a hug) and bumped into Patty and Corrine before heading off. The experience, seeing our old workplace, is surreal. There is a new custodian/shipper/receiver and we were both pleased to see that. He seems very nice.

Brenda and Randy have invited us for the afternoon and a barbecue supper so we drove to Windsor Ave. Brenda is my London hairdresser and she did my lowlights and treated me to a birthday pedicure last October before the Cancun wedding. She is a sweetheart of a friend and we hit it off within the first 10 minutes of meeting each other back at the school board warehouse. 😊 She has a piece of my heart, forever. Randy is the perfect match for her and visa versa, we are so happy that they found each other.

Quite a bit of alcohol was consumed between 3 and supper time out on their beautiful back patio. The gardens are so pretty and decorated just exactly the way I’d expect. A little haven away from the street. The bbq’d striploin steak and roasted cauliflower w/garlic was wonderful! Nice and keto until she brought over her homemade apple pie. She is indeed the Barbecue Queen and Goddess of pie crusts. Ha ha, private joke.

It was 9:30 when I looked at the clock and we scooted out of there. No such thing as overstaying your welcome with friends since we were all having a wonderful time. Hugs and a few pictures and we were out the door. It was a mild evening, 16C/60F and we drove home under the waxing crescent moon. I had to look it up to see the 33% percentage of illumination since it was obviously more visible than the previous night. Interesting.

Back home, we let ourselves in the shop and locked up the outside door. We were in bed immediately (after a couple of drinks of water) and asleep quickly. What a wonderful day!

Posted by Patsy Irene (Chillin' with Patsy) at 8:21 AM