On Thursday, Sept. 24th I felt no different when I woke up. I didn’t feel a year older at all! My ‘good morning, sweetie’ guy wasn’t in bed with me when I first opened my eyes. It was 6 am and all was dark downstairs. Hmm. I bet my open window was letting too much traffic noise in and kept him awake. ☹ Such was the case when I went downstairs at 6:30 but he said he didn’t want to wake me to close it. He’s a keeper although I wouldn’t have minded!

I have to clarify a bit. Waking up on the day after my birthday, I DID feel something different. I felt blessed. When I think of the texts, messages, cards, gifts and phone calls that I received yesterday, I truly felt blessed. I needed to post a general Thank you! on Facebook where it would reach the most people. We had our first tea and coffee together and got washed up while reading blogs and finding something to eat. We are looking at another beauty of a fall day, with a forecasted high of 25C/77F. A slight showing of wispy clouds is the only thing shielding the sun in spots but that just makes it bearable. It was a ‘shorts’ day again.  Yay!

At 8:30 we drove to Costco and stocked up on a few things, mostly dairy stuff with prices we can’t refuse. There was a fair line up before the doors opened and we waited the 20 minutes until 9 and joined the fray of shoppers. With my list, we moved quickly and didn’t find congestion or closeness with others a worry at all. Everyone kept an appropriate distance where possible. To me, it was all very organized as they, too, want customers in and out easily and safely.

Once that was all loaded in the Suite, we picked up a few things from the shop store at CanAm and were on our way home. We’d both made a coffee to go and will drink it sparingly on the route home. It was 11:05 when we pulled out of their lot. The drive was uneventful and as all rv’ers especially know (when pulling units), that is good news. We were both feeling pretty hungry as we got close but with nothing to snack on in Black Beauty, we decided to just keep on trucking.

It was 2:05 when we pulled into the laneway, exactly 3 hours later. I took a few pictures of the coloured leaves but other than that, pictures are not too interesting today. I had to use the outhouse as soon as we got to the top of the Ridge and then gave Bill very little direction to situate the Suite on the rubber lined boards. We were advised that this helps extend the life of the tires. Within a few minutes, we were in place and I was opening things up.

I texted Donna and Pat as they were the ones who would be most curious of our safe arrival. There was setting up to do but first we had a late, mid afternoon lunch. I did dishes and Bill unloaded his Piper Cub from the box of the truck. After some relaxing and reading (and a snooze), Bill went out to cut the grass up on the berm. It got missed last Friday or whenever it was. Wendy and Martin had asked us to bring something back from an Airstream customer in Flesherton on our next trip to London so Bill called him to meet up.

Turns out, Bill has an event at the London flying field on Saturday so will be going back so soon. If the Suite could have been worked on more this week, we’d have stayed but it made no sense to hang around for two days when nothing further was scheduled. I’m quite happy to get home anyway. I sure appreciate our Suite much more, here at home. After a sufficient delay and the berm getting cut, we drove to the small village east of us, before supper.

Mitch called us this afternoon, thinking we were still in the city, to tell us that the farmers were taking the soybeans off around his place. We’ve talked about how we thought they were ready for the picking. He said the dust was terrible and he had to move his Acadia and his Lincoln to the other side of his place. I informed him that we were home but I wouldn’t see him until Monday. 😊 No worries.

Bill has been waiting to get the truck (and car) undercoated before winter and the truck advised us yesterday that it needs an oil change. Luckily, on the drive home, we got a call from Pletsch’s and they can take us to do both things in the morning. Hopefully, over the next 2 weeks, Ptooties will get in too. We realized that we only have 3 weeks before we’ll be starting to move into the house! Things are happening really quickly.

The Suite will go back to London as soon as we empty what we need for use or storage. Wes and Susan, our hosts, called earlier this week and they are ready for us to take a second tour through their place. This time with our eyes wide open, looking at space and doing a bit of measuring for a couple of things. We’ll just have to figure out when we can all agree on to do that. When we got back from Flesherton with the Airstream part, Bill went out and cut the front field. It didn’t get done last week either.

I was in no hurry to eat, after our 2:30 lunch so came inside and read. I’m skimming through this book quite quickly. Just the first few chapters were words I wasn’t used to. The story is very good. When I heard Bill putting the riding mower away, I began warming up the last of the chili for supper. We had toasted buns with it and that hit the spot. Eeek! It was 8 o’clock when we finished eating and doing dishes. I better stay up later than 9 tonight for it to settle!

After publishing my post tonight, I sat back with my book. Bill had connected the satellite dish, as it was all set up to go, so the evening was spent with tv after not having it since Sunday. This turned into a better day than I first thought. That is my feeling about being home. 😊 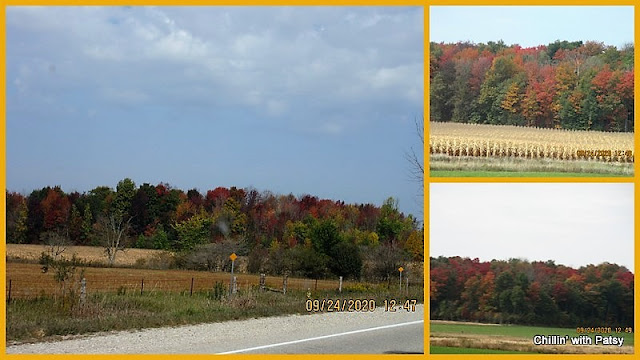 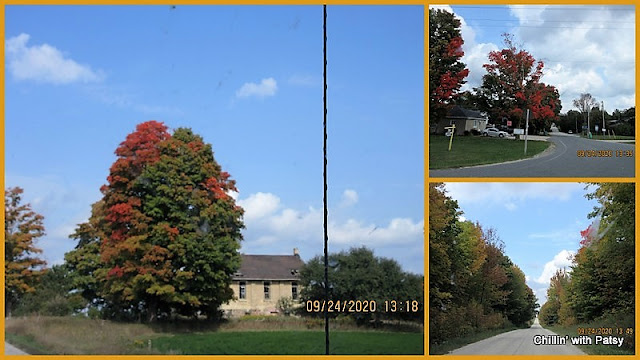 Posted by Patsy Irene (Chillin' with Patsy) at 7:17 PM