Life in the City, Okay to Visit but We’re Glad We’ve Moved to the Country

On Monday, Sept. 21st we were awake and up around 7. It was cozy under the duvet but chilly air surrounded us as we slipped out of bed. I nipped downstairs and turned the furnace on to run a cycle or two. It was 10C/53F downstairs. We got up, Bill had a shower and I washed and made a tea. The sunrise would have been on the other side of the building so I didn’t see that.

Last night, however, at 8:15 we were blessed with seeing the International Space Station, I think I mentioned that. Today is looking like a beautiful day so we picked a good week to be here. When it is cold, during Covid-19 especially, and your trailer is not accessible in the daytime, you aren’t enjoying the days very much, constantly trying to entertain yourself in the city. In this weather, we don’t mind being outside at all.

So, we planned our day around Andy’s plans for the Suite. Andy is one of the owners of CanAm and he has us set up to be worked on down the road at Kirk’s farm shop. He is the other brother aka owner. 😊 We’ve parked there before so pulled slides in and moved down to meet up with Todd. He will be doing the work on his own. There are some hiccups, some things will not be done this trip, because of parts delays, but we’ll deal with it.

There are bonuses with being down here at the farm. Our Suite is Todd’s only focus, it can stay parked in the shop all night, plugged in and we can sleep in it inside for as long as we stay. We couldn’t do that at the main CanAm site without them bringing it out at night and back in the next day. Another bonus is that here, I can set up a chair outside and enjoy the peace and quiet in the country. I’m used to that!

We’d planned to meet up with our youngest daughter, Jess with Easton. She was in London for a dr. appointment and after it was done, we met her at a Costco parking lot for 45 minutes or so. Easton never ceases to make us smile. Such a good, very active, little gapher! I laughed when he was in my arms and pointed to the busy street “Truck!” Indeed, there was a big truck. His words are coming. His little waves with his hand (not his arm, just his fingers) make us smile and his blowing a kiss is cute. He kisses his hand but doesn’t throw it to us. 😊 Yet!

We weren’t up to shopping today nor had we connected with anyone else for a visit. Since we were hungry and it was approaching 11:30, we stopped at the Flying M restaurant for lunch. That was nice and my Reuben was delicious. Then we drove to Bill’s flying field on the southwest corner of London. Neither are far from where we’re staying. We relaxed there for a couple of hours. No one else was around, the way I like it. We dozed, read and I took a walk around the field and lane.

Back at the farm, Todd had gone probably back to the main shop but there was evidence that he had started on the a/c, the slide rollers, the fireplace and the sink. There wouldn’t be any brake work done here or probably not this time at all. Parts have not arrived. We’ll have to decide when to bring it back. Obviously, we are in no rush now but will still try to get them taken care of before spring.

I sat outside, read blogs and then started my own for today. The sun is gorgeous out here, as I face southwest. Bill helped Todd where he could but mostly stayed out of his way, I think. He had brought a plane to fly if things worked out as far as weather/wind/time so took the time to charge his batteries in the shop. I delved into the new book I’m reading.

Keep Quiet is not hard to get into but after about 6 chapters I didn’t know if I could read it. Without saying too much about it, I thought it would upset me too much so cheated and read the last couple of pages. Once I found out the basics of how it turned out, I decided I could handle it after all. If you’ve read it, you will know what I mean. It’s a very ‘moral’ story.

I’d read for quite a while when I closed the book and took a walk around the barns and shops before checking how they were doing on the Suite. Todd was working late tonight but he was done inside for the day and at 6:15 he told me we could move back in. I pulled chili out of the fridge, we could have it tonight and still have some left for one more meal. 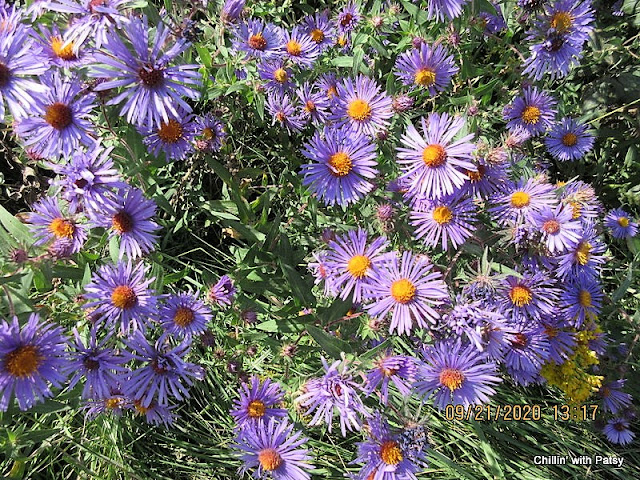 A cup of tea was in order so I made myself one while I waited for Bill to come inside. Once he left, I warmed it up and made some toast to eat with it. Oh-oh, we were out of butter! That never happens! We’ll have to pick some up tomorrow. Supper was late, at 7:30 we were eating. Because we noticed over the last month that our kitchen sink was dropping, it was on our list. Todd silicone it as his first job so it had time to dry and harden.

This meant no dishes could be done in it tonight. No problem, Todd suggested we use either dishwasher or the shop sink. It wasn’t worth emptying the dishwasher for the few dishes we had so Bill washed and I dried them out there. We didn’t have satellite nor an antenna so Bill turned our Neil Diamond, Hot August Nights III on. It had been recorded quite a while ago. We like his specials. We relaxed for the night and didn’t stay up too late.

Oh, there is some news that I’m bursting to share. Jess handed her Dad and I a cupcake each today. She indicated that inside would reveal the gender of her little bun in the oven. Bill was into the middle before me so I turned away and bit into mine. We are so happy for them, the MILLIONAIRE family. 😊 We are expecting another granddaughter!

Thank you for checking in on us! Two country hicks in the big city again. 😊

Posted by Patsy Irene (Chillin' with Patsy) at 7:10 PM