And Then It Happened, We Moved!

Waking up on Tuesday, Apr. 24th was the day. There were clouds covering the sky so we didn’t have a sunrise, yet it was warm. The overnight temperatures didn’t drop below 43F/6C so a great night for sleeping as well as rising. It was 6:30 when Bill got up and I followed within 10 minutes when I heard him preparing his coffee.

We’ve had three perfect battery-charging days so we hope the sun pops out periodically today to keep us off the grid. We haven’t turned the power on yet but will play that by ear. We had one priority this morning and that was to read a few blog posts from our friends and then pull the slides in, hook up and get up the hill. There could be rain on the way later tonight so we want to take advantage of the dry conditions now that the snow is gone.

At 7:45 I moved Ptooties out onto the road so Bill could pull the Suite out. We were backed in, obviously, so he had to turn it around and drive up the lane. I followed with the car and he had no problem at all swinging into position. One minor adjustment to set the wheels between the bricks we’d left last fall and we’re done! Yay! The landing gear down and slides open, Clemson, our supervisor, agreed that all was well with the world now.
We each puttered around doing our own thing and when Bill set the satellite dish up, he came in to check the reception and had 99 and 98% bang on with no adjustment. That puts a smile on his face everytime. He’s that good!

He called his Dad to let him know we had ‘arrived up on the Ridge’ and I contacted the accountant in Durham about bringing Mom’s income tax in to him. It looks like I’m missing a T5 so had to follow up with the bank on that. My mistake with our address change, I’m sure.

It was 11 o’clock when Bill admitted to being hungry so I cooked some bacon and hash browns with eggs. A nice countryman’s brunch. It hit the spot, I was hungry too. We cleaned up dishes and soon went out to enjoy the day.

Solar motion detector lights got put up on the bunky and the outhouse and Bill pulled up the electric garden lights that stopped working last spring. He also placed our turtle signs up in their respective spots so I announced to the pond that they could now cross the lane safely.

I washed the outhouse down really good with Mr. Clean now that the critters are dead and gone. They do leave black spots on things and webs so they are all cleaned up now. I’ll do the same in the bunky once we get it emptied of a few things and uncover the tv. Bill finishes one job and moves on to another, where I had pretty much reached my limit by 2 o’clock. The warm day (15C/60F) had started to cool down yet things had dried up nicely so we could walk most areas. 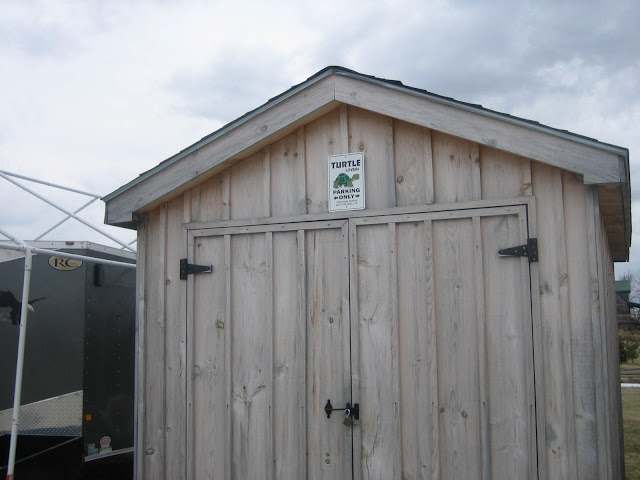 When Bill announced that the mail had been delivered, we walked down together to collect a magazine. Clemson remained inside, no amount of encouraging could budge Mr. Lazy Bones off the chair. It was around this time that Gerry, Donna, Tom and Audrey drove in to see how things were going. They were out for a drive to the Acreage so popped in. There needs to be a whole lot of drying up on that property so they can get a ‘new to them’ trailer in, in a couple of weeks.

I wrote a bit on my post and Bill downloaded his pictures but my eyes are heavy so I moved to the recliner. Maybe a snooze, maybe not, but a rest for sure. Once Bill finished at his laptop he turned the tv on and promptly drifted off. That, of course, is when my return call from BMO came in and woke him up. I perused Canadian RV’ng magazines that came over the winter. Some of the questions and responses are interesting and articles worth reading.

Clemson is making up for lost time today and now is constantly at the door to go out, now that we’ve come inside. It is nice that we can just open the door and let him go on his own but we still need to keep an eye where he goes. At 5:15 Bill lit Broken Wing Weber for our first steak dinner at home in a long time. I prepared a potato for grilling as well as made myself a salad and fried some sliced mushrooms.

We weren’t too keen on the thick steak, the thicker it is the more difficult it is to cook to that ‘just right’ state, but it filled us up and that is the main thing.

After cleaning up dishes, I finished my post and downloaded my daily pictures. This has been a mix of work and play and a bit of relaxing too, therefore making it perfect! I hope the day was good to you too.

Posted by Patsy Irene (Chillin' with Patsy) at 5:38 PM