Homeward Bound! Great Day for a Drive and Slipping Into Home Base

Today is the day. Friday, Apr. 20th. Bill was up really early this morning, before 6, and I noticed his absence soon after when I woke out of a dream. Me, as a passenger, in Black Beauty with a female driver who I don’t even know in real life. Me trying to tell her to put the truck into 3rd gear going down a steep incline. Weird! I appeared to know what I was talking about, that is the odd thing. Bill is rubbing off on me. 😀

So, I got up just before 7. Today is moving day, we are going HOME. The blue sky greeted me as I opened my bedroom shade and that alone brought a smile to my face. Somehow in my haste to get groceries in the house, I twisted my lower back so have been ‘hunching’ around ever since. Tylenol are helping ease it but I will be nursing it for a wee bit. I just hope the 3-hour truck ride today doesn’t make it worse.

Bill finished his coffee and left me with mine and headed across the city to pick up a couple of things he’d ordered from Hi-Tech. I can’t seem to keep it straight what these things are or what they do even though Bill has explained it a few times. It just doesn’t stay in my head. So, since we aren’t getting tires here now, he wanted to make a trip out to pick those up and pay our bill before heading out. He also wanted to top Black Beauty up with fuel at the Flying M.

I warmed up my breakfast quesadilla from yesterday’s leftover since Bill had some cereal before he left. With some cottage cheese on the side, it will satisfy me until after we arrive at The Ridge. I finished putting things away and pulled in the vanity slide. There were a few dirty dishes from our ice cream last night too so I got them out of the way. When Bill returned he wanted to get our second propane filled since it was also getting low so went inside to see if Ben was available to do that.

There were some new Dynamex Class C motor homes that came in when we were out to dinner last night and one was parked right beside us. They were backing it in the bay so we would have no hinderances getting out. Otherwise, we would need them to bring us out of this tight corner with the tractor. Andy said that would be no problem if we needed that help.

I saw Andy, one of the owners, arrive and park across the way and then noticed Bill walking over to him. I slipped out of the Suite (slipped because I was in my slippers) and went over to give Andy a hug. Thanking them for their hospitality for allowing us to stay for so long. He said no problem, as I noticed, they managed to put Bill to work while he was here! Nice people, we’ve said that many times and just can’t say it enough about this whole crew. A huge thank you to CanAm!

We were ready to pull out by 9:15 and wasted no time hitting the road. It was the perfect travel day. We drove on the 401 to the Highbury exit taking us to the Flying J Truck Stop where we paid our $5 to dump our tanks. From there, there was no stopping us. The rest of the drive was uneventful, going from no snow in London, to spatters here and there around Stratford to full ground coverage as we arrived in the Mt. Forest/ Durham area.

With texts and phone calls back and forth to a few people, our fingers were crossed that we’d have no problem entering our driveway when we arrived. All looked great and Bill backed in with ease, after opening the gate. However, we were too close to the east edge and it would not be easy using the steps in and out of the Suite. As he pulled ahead, the back tires (the ones we didn’t get replaced yet) began to slide. Realizing this was pointless and getting us more off track, Bill called our friend, Rob. “Help!” 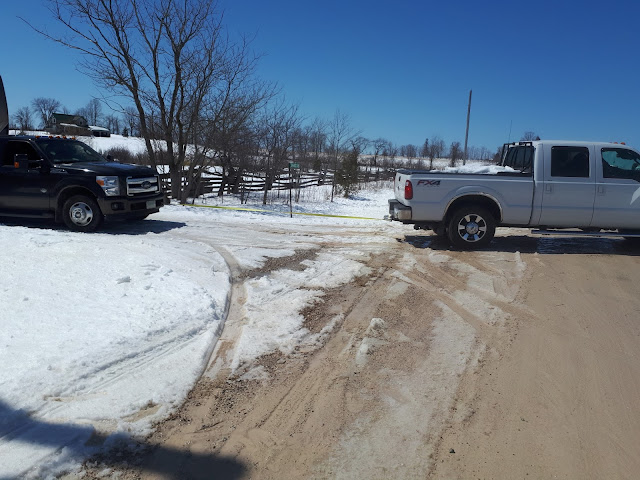 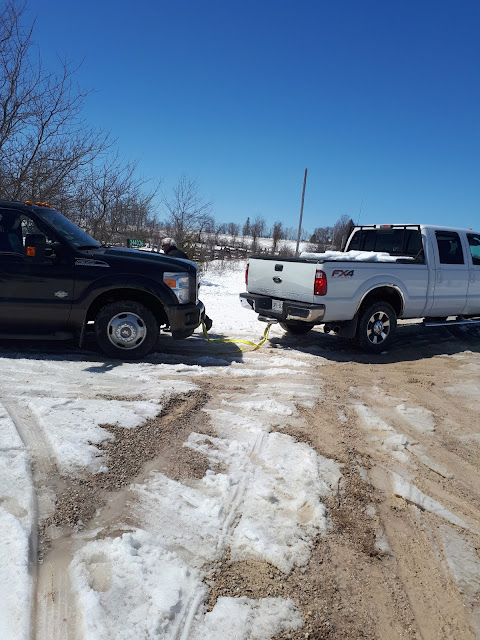 Within a few minutes, Rob and Pat arrived with his F250 diesel 4 x 4. Between the two of them, and a bit of gravel from North Line, Rob pulled us out enough so Bill could back in once more, closer to the west side of the drive. Bingo! Yay! We were home! Bill almost had to twist their arms to come in for a ‘thankyou’ tea/coffee with us but finally they relented. He had opened slides and turned our heater on while we were chatting. It was nice to have a quick catch-up with our first Happy Hour back home. 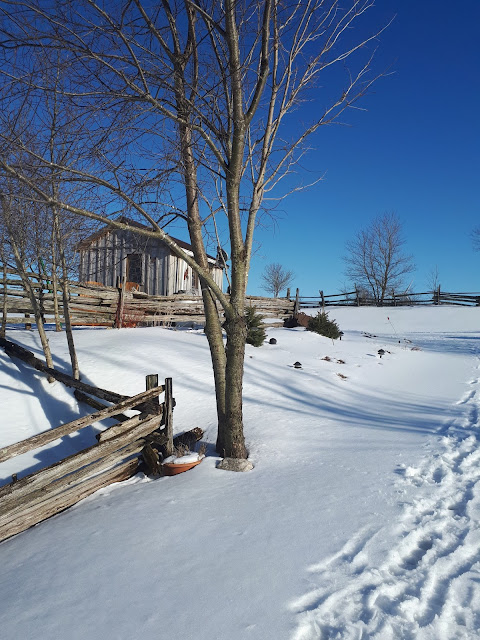 After they left, Bill and I went for a walk up the driveway, through the snow. Oh, and Clemson, of course. He was FREE for the first time since we left home in October and it was so much fun to watch him. You could see it in his face that he remembers it here and checked out all his familiar ‘territories’. 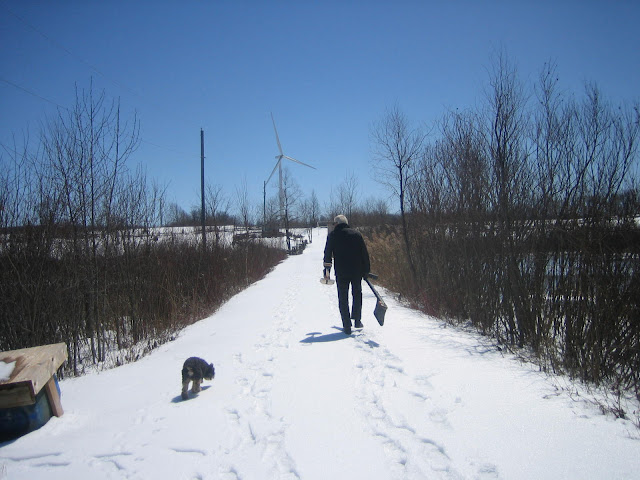 We had a peek in the bunky, the storage shed and the Restroom before loading the mailbox onto the wheelbarrow. Bill pushed while I held the post stationary. Now, with it sitting at the road, mail can begin its scheduled delivery on Monday. We also carried our ‘firepit’ out and set it in place. Bill found a lighter and some paper to burn, just because we can. The wood was damp and didn’t seem to catch on before we headed back to the Suite. I actually carried Clemmy back, wiping his feet because he was shivering so. He may think he is just a baby but he is an old geezer like us!

We came inside, had a bit of down time and Clemson almost slept through his 5 o’clock mealtime!! He was so pooped from his romping in the snow. I was hungry too and wasn’t very good at planning for supper tonight. While I made a decision, probably a bad one according to all sous chefs out there, Bill went out and pulled the satellite dish and generator out of the basement. I’m deciding on what to make for our potluck on Sunday and without imposing on Pat and Rob again, want to be able to use the convection oven.

Bill had brown beans on toast and I had a bowl of my chicken vegetable soup. This is the best soup I’ve made yet and I’ll never be able to duplicate it, I’m sure. I’m enjoying it never-the-less with just one more bowl left for another day. While routing around in the freezer looking for wieners or mini sausages, I located a bowl of the bean soup I made in the winter. Hmm, I pulled it out to thaw for another day.


We cleaned up dishes and at 6 Bill and I took another walk up to the top of the Ridge with recyclables. Nice to be able to do that again, not all places in the southwest follow that process. It just feels so good to have a safe and beautiful place to walk again. The road is showing signs of a real meltdown, which means it is leaving behind a muddy mess. No point in thinking about a vehicle wash for a while.

Bill made arrangements with Murray to get our Toyota out of storage tomorrow so we will head over to Hanover in the later morning. We also thought ahead and asked him to hold our spot for next winter. Can’t beat the price for an inside storage and he is such a personable fellow too! Back inside, Bill was disappointed that we have NO, ZERO, ZILCH reception here on our antenna so we’ll either watch a movie, read or stare into each other’s eyes tonight. The satellite dish will go up tomorrow.

Anyway, we are well, after arriving and setting up on familiar turf. The weather is improving and I’m going to be capturing some sunrises and sunsets for a while. Yes! This has been a wonderful day. Top notch. A-1 and all that good stuff. I hope you can say the same!