Pilot Knob RV Resort, Winterhaven, CA
Thursday, Jan. 2nd arrived with a beautiful calmness. Bill and I were up around 7 and yet for some reason, slow drinker across the table perhaps, we didn’t get out for our walk until closer to 8:30. Good grief! The sun was already well up over the mountains this time. It was still a nice walk and I do enjoy my hubby’s company so really don't mind waiting for him. 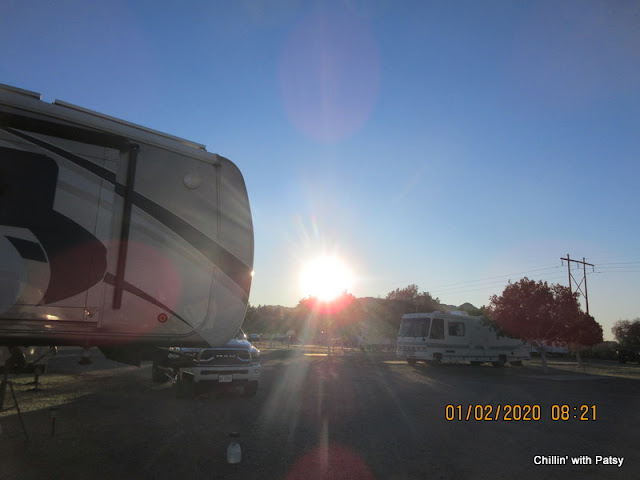 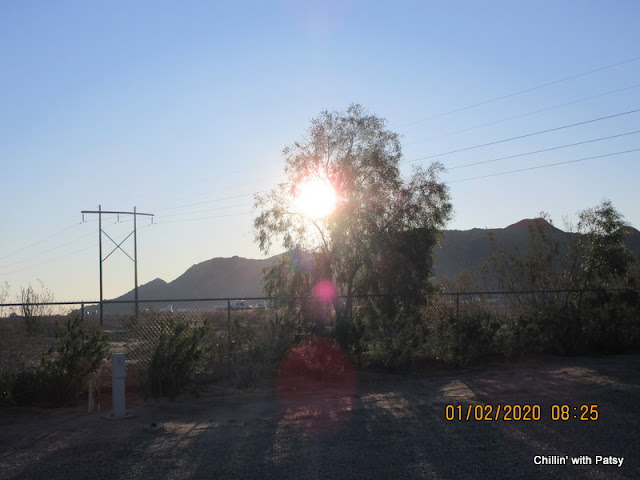 Back home, it was soon 9 am and I realized I wasn’t going to be able to finish my hot tea before we had to leave for Bocce ball at 9:15. I poured the remaining amount into my thermos and we walked to join the group. Ken, Bill and I were the first to arrive, with LaDonna and Roderick a close second. We set the table and chairs up for Gordon and Barb and then teased them, as bosses, for being ‘almost’ late. There was a smaller group today of about 12 players.

It is nice with less because it guarantees you playing time, almost every game, if you want. I played with Ken C. first and we won that game and then I played with Ken W. and we took the win as well. Then it was a losing streak for me for the last 4 games. In the middle, during a game I didn’t play, I walked back to say goodbye to Tom and Deb. They were pulling out and going on down the road just a few miles for some boondocking.

Slowly, the group is breaking up but only for a few weeks until we get the 'band' back together again. At 11:45 we all left the bocce court and Bill and I came home for brunch. I cooked some of the thick sliced bacon we’d bought from Sam’s Club the other day with eggs and some cheddar cheese on the side. I'm trying to concentrate on filling our tummies with enough good fats in the two main meals of a day. At least that is the goal and a snack of cheese or nuts mid-day isn't a bad idea either.

After dishes, I thought I’d have a shower and then go up to the pool. I did have my shower and dressed in my bathing suit and cover up. The winds, which were non-existent first thing and until about 10:30, had crept up to somewhere between 24 and 29 mph. No way was that going to be comfortable sitting around a pool and it probably wasn’t even opened yet. They will open on request but let’s get real, the strong winds are not fun when you’re wet so I doubt anyone has asked for the gate to be unlocked.

Instead, I sat and copied some Keto recipes into Word. I have a Recipes file that I keep them in for easy reference and reading when I’m cooking. A laptop cookbook, if you will. By this time, I’d changed out of my swimsuit and into shorts and a tee. Bill did some research online as well and then found his comfy chair. He immediately dropped off. Another late night for him, I think, although I really don’t know what time he came up to bed.

Crash, bang! I looked outside and our Weber, wind screen and table had blown over. Winds from the northwest were the culprit. I had to wake Bill to get it upright and then he returned to his seat. I began making custard and Jell-o for some keto desserts. With the Jell-o setting in the fridge, I got the eggs in the bowl and heavy cream measured for the custard. A slight delay since Bill was sleeping again so I couldn’t use the mixer.

When Kim texted inviting us over for an indoor Happy Hour just after 2:30, I responded that we would arrive at 3 and thanked her for the invite. It would just be us 4 today since Jo-Anne and Bob were away somewhere. The sun was gorgeous but the wind was still very strong making it uncomfortable for sitting outside. If we had a sheltered area, maybe it would have worked but we were quite happy to sit inside their beautiful Journey.


Before we left the Suite, I beat the eggs, and brought the cream and Splenda to a slight boil for the custard. It was poured into 6 ramekin dishes and sitting on the counter so I could bake it when we returned. We haven’t had custard for a while so it will be a treat and just on time for our keto challenge. 😊 We walked up to Kim and Ken’s with our hot drinks.

Two and a half hours later, we were still laughing and conversation was still flowing but it was time to say goodbye to our hosts for the night. We all needed to get supper going. Back home, Bill said the wind had dropped some so he lit the Weber but left it sitting on the ground.  We were lucky that nothing broke this time that it went for a tumble. I opened a bag of mixed salad, another feat taken care of, and we were eating by 6.

With the custard finished before we ate, we had one each for dessert. It was warm rather than cold this time and that was a nice change. After dishes, I blended the cream cheese and cream for the Jell-o so that was another option for the days ahead.

We’ve decided not to eat anything after 7 pm, a practice that we should have been living by all along but we fell off the wagon on that. Supper was good from beginning to end and then I sat and worked on today’s post. 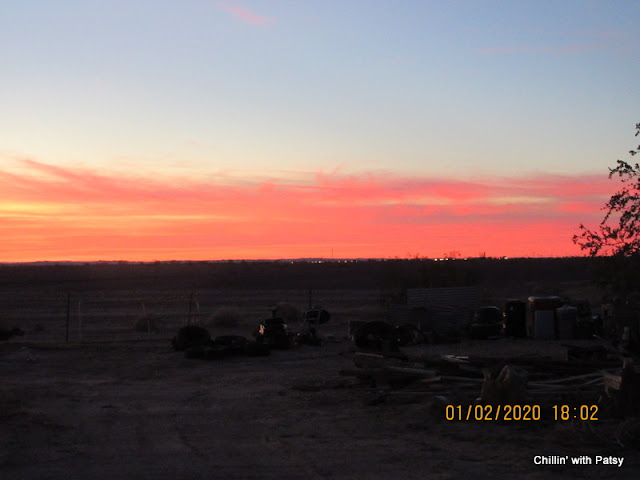 The evening was spent in front of the tv with my sweetie. I tried a couple of times to read but not too many chapters were completed. There’s always tomorrow. 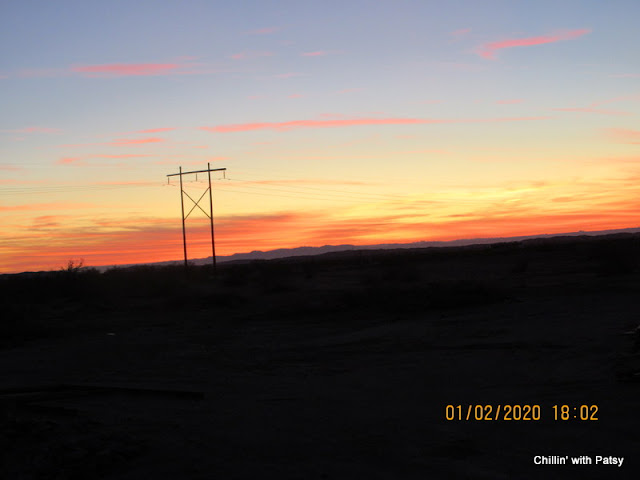 I have a new challenge on GoodReads.com too, something to work towards. I hope you’ve had a good day and survived the strong winds if you had them. As I’m finishing this post, they have dropped to 3 – 6 mph. Much better!


Thank you for popping by!

Posted by Patsy Irene (Chillin' with Patsy) at 8:13 PM