Sunshine and Warmth Returns, Christmas is Over - Storage Not an Issue

Bill and I slept in and just played the ‘lazy’ card this morning, because we could. It was 7:30 on Tuesday, Dec. 31st when we crawled out of bed. It was definitely light enough to go for a walk but Bill needs his coffee soon after waking so we waited. By 8:30 we were both involved on the laptops that we decided to wait until our neighbours left.

B & J were taking a drive today and were leaving the key with us, just as a precaution. It is always a good practice if you are going away for any length of time, especially overnight, to leave access to your unit. Plus, a rule in some parks that you notify the office of your absence. After some discussion at yesterday’s H.H. we’ve deduced that in case of a fire, park staff like to know they don’t have to risk life and limb rescuing someone inside a unit where no one is home. Makes sense.

Jo-Anne and Bob popped over with Higgins just before 9 to say goodbye and we wished each other a Happy New Year. We’ll see them tomorrow. By then, the urge to walk, for Bill especially, had disappeared so I agreed and made my tea. We ate up the last two warmed cinnamon rolls and then we started taking the Christmas decorations down. Christmas is over and it is time to put our house back in order. It isn’t as fun as putting things up but we worked steadily until 10:30 when the tree was the last thing to be tucked under the bed.

We do have a lot of storage. Under the bed and overhead cupboards all around the main and bedroom living areas provide plenty of room for things. Even when we shop at Costco or Sam’s Club and buy bulk items, we can tuck things out of the way fairly easy. We are very lucky and grateful for that since we do live in here full time. To me it would be very frustrating to see something that we needed that was only a deal if you bought in bulk and have to say ‘oh, we don’t have room’. We are kinda spoiled.

We each made a coffee and sat together to relax. Bill was disappointed but not overly surprised when we heard a thud outside. Oh-oh. Never a good sound but he suspected that his flag pole broke in the wind. LOL he has his trouble with those poles but it never seems to deter him from wanting one up. Sometimes, I just roll my eyes (as I would have given up long ago!) but in other cases, I love his determination and have to smile at that.

I left him working on the battery thingy for his plane and took a walk half way around the park. When I got to the clubhouse, I picked up a new weekly schedule and went into the Puzzle room. No one around so I settled in and got to work.

This puzzle has been fun and I’m at the point where I really would not like some newbie coming in and finishing it for us. Ken and I have made great progress on it and it would be nice if one of us put the last pieces in. No guarantee of that though. ☹

While I was in there, the sun came out, the clouds returned and then it rained lightly for about 5 minutes or so before the sun made a repeat appearance – and stayed. At 1:30 or so, I figured I’d made a good dent in the puzzle in 2 hours so returned home to see what my sweetie was up to. He had vacuumed, dusted the woodwork at the top of the slide-outs as well as washed some areas of the ceiling showing dirt specs. I should leave that man alone more often!

I sat at my laptop and caught up on today’s post before looking up a recipe for ‘mushy bananas’. I found something different than the traditional banana bread which is not my favourite and certainly not something I want hanging around the house. We’ll just eat it. We, meaning Bill. It is usually the only way he’ll eat the fruit. So instead, I made a Banana Chocolate Mousse.


I don’t know how it will turn out but I know that I will eat it and the bananas won't end up in the garbage.

Bill went up for a snooze around 2:15 while I was making it. I got three dessert dishes of mousse and put them in the fridge. I’m not sure how firm they will get but it doesn’t matter. Kim texted and invited us for Happy Hour so because of the warm temperatures outside, I changed into capris and a sleeveless top. Woohoo! Sunshine again!
We gathered our chairs at the front of their coach and it was quite nice. Tom and Deb joined us until 4:00 or so when they left for a New Year’s Eve Mass in Yuma. 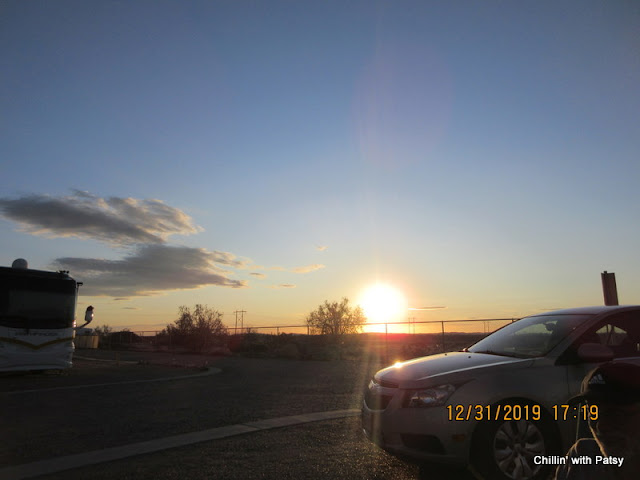 It was after 5:30 when we said goodbye to our hosts but not until we’d made plans for the evening. It was New Year’s Eve after all! We came home and made a quick supper in Rosy, our air fryer. Shrimp and fries and they were yummy. At 7ish, Ken and Kim joined us to help bring in the brand new year of 2020. We played Double Series of which the girls ran off with the win and then we stopped to watch Rockin’ New Year’s Eve on television until the ball dropped. 10:00 MT. It just isn’t the same without Dick Clark and we know none of the entertainers.

Happy New Year! All around toasting with our Cancun Quayabilla tequila before we played their game of Bananagram. This was fun too, a new version of Scrabble with a fun twist. Most of the game was spent chuckling at Ken in the flamingo pose, with the banana on his head repeatedly spelling ‘p-e-e-l’ over and over. You'll understand that if you've ever played the game.

I would play this again minus the party cubes. Great practice for the online Scrabble games that Bill and I play.


I was surprised that as long as I was having fun, I didn’t feel tired until after our friends left at 11:15. This was a great day and now we have a new decade starting. Let’s see if we can do it just as well or better than last year!

Posted by Patsy Irene (Chillin' with Patsy) at 8:26 AM