Last Day in P.K., Shopping, Fuel Up, Pack Up, Swim

Pilot Knob RV Resort, Winterhaven, CA
Tuesday, Jan. 14th Bill was up before me. Not sure what time he rose but when I rolled over and looked at the clock it was 6:45 and he was gone. I stretched lazily and after making the bed, joined him downstairs. Today is to be another nice day and we’re going to love every minute. Bill was ‘on the schedule’ to have his shower this morning so he informed me that I should go for my walk without him. I was expecting that so once it was light enough, I dressed for the 48F air and left. 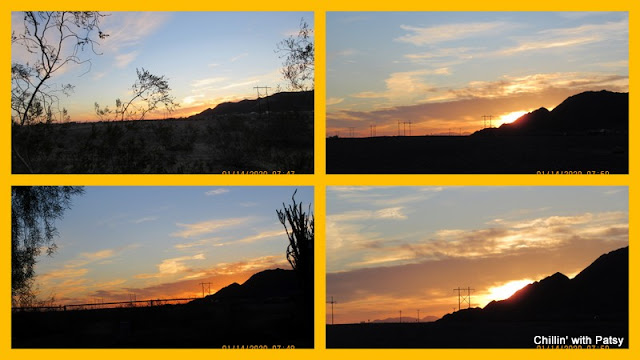 There were no winds at all, just the chill on my chinny chin chin. I wear my mini gloves but still had to keep my fingers moving to keep them warm. When I returned after a nice walk, I made my tea and in between drinking it, got washed and dressed. Bill was ready for the day so went out and started putting things away. His plane for one, needed to be disassembled and packed away in the cab end of Black Beauty’s box.

We left the Suite with a fair-sized grocery list and picked up Keith and Dave. Today was grocery shopping day! Because of the type of rv’s they have, they don’t have a free vehicle to make these runs without taking their ‘homes’ with them. We don’t mind offering them a ride at all, we are going anyway. We loaded the 3 gas cans, 2 for their atv’s and 1 for our generator. First, we went to Fry’s and we all shopped. They didn’t mind helping us add to our diesel points since we were getting them discounts on food items.

Then Bill stopped to fuel up at the Fry's station and from December’s and January’s points, we scored .30¢/gallon off. Nice when the original price is $2.89/gal, cheaper than most stations in the area. We filled Black Beauty for $46 and drove away smiling. We then went to CVS for some cash and then Walmart where we all got out and found a few things before meeting back at the truck. I got lost coming out of the store and had to call Bill to find me. Ha ha.

It was close to 11:30 when we arrived back at the park and dropped the boys and their wares off at their sites. Once I found room for all the groceries, the freezer is over-full by the way, we recorded our expenditures and I made us an omelette. It was not senior’s day at Fry’s but we scored anyway on ribs and beef roasts with the buy 1 get 1 free deal. We should be fully stocked up for our two weeks away. Lots to eat.

We’ll have some ribs tonight because they won’t fit in the freezer but that’s a good last meal here for us anyway. After dishes, I put my paints and containers away under the bed. They have the perfect cranny under there until I want them out again. I caught up on my post and changed into my bathing suit. Last day for the pool for a while so I want to take advantage of this gorgeous day. It is going to reach 72F.

Bill was cleaning out under the basement area when Keith and Oreo stopped by. Now was a good time for me to head up for a swim. I left the guys to enjoy each other’s company as I knew Bill would work at packing things at the same time. There were 4 people at the pool so I pulled a chair over facing the sun in a corner by myself. I had taken my book up and like no distractions while getting into a new story. Oh yah! I forgot to tell you that I finished The Reversal. A nail biter, it was.

This one is actually 2 stories in one, apparently, by the same author so I delved right in. Bodyguard and Tracker were the original publishings. Now it is called Survival Mission – K-9 Unit by Shirlee McCoy and Lenora Worth. I’ll let you know how it goes. The chapters are long but I completed two while sitting in the heat of the beautiful sun. When I first arrived, I took a dip in the pool, swam a couple of laps and then stretched out on a lounger. Beautiful.

It was around 3 or so when Keith showed up. Bill told me later that they had a nice visit since I’d left at 1:30. At this point, we aren’t sure if he is following us to Quartzsite tomorrow or whether he is waiting until his 2 weeks is up on Friday to come. At least we know he is coming to experience something new. His travel mate, Dave, is a quiet, private soul so we don’t know what his plans are at all. We do believe that he is enjoying his time here in the park though and is appreciative of Bill showing him around.

Keith and I walked back from the pool as far as his site and I moseyed on home from there. Bill had things outside all put away with the Weber Q as the exception. I’d asked if he minded leaving it out so we could finish the ribs tonight. I had 2 half racks that wouldn’t fit in the freezer so instead of cooking just one tonight, I decided to do them both. 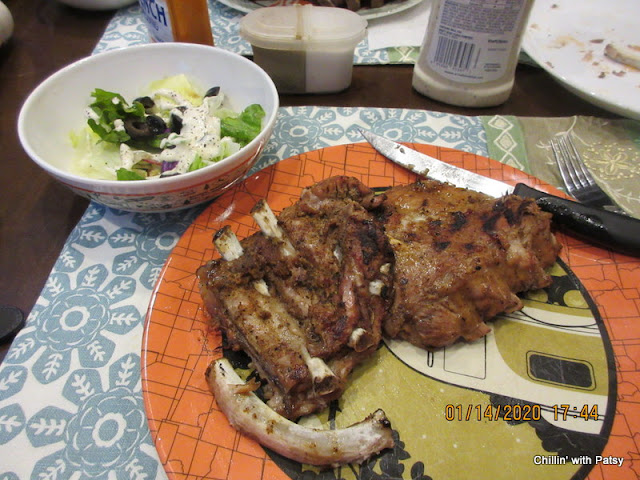 Bill was watching NCIS reruns and soon enough dropped off to sleep. He hadn’t had his snooze yet so I didn’t bother him. Madame IP built up steam which took about 10 minutes and then 15 minutes of Natural Release after Manual cooking. As I lifted them out of the pot, I could tell they were done perfectly. I slathered sweet & sour sauce on half and barbecue sauce on the other half and Bill put them on the barbecue for about 5 minutes.

On the side, I opened a bag of garden salad served with our favourite dressing. Bill’s is French and mine is Caesar. Supper was really good and when I couldn’t eat the last 2 ribs, Bill finished them for me. You can tell from the bones that they were falling off easily. What a great meal and I had a couple of glasses of the Barefoot wine too.

The new episode of NCIS was on tonight as is New Amsterdam, which we recorded, we watched FBI and a new episode of This is Us, which we will record. The fun begins! This has been a great day. I had a good morning shopping with the three guys, how lucky can a gal get? At one point, they all had to wait for me while I got lost in the parking lot. Teehee. An afternoon at the pool once more before we leave and a great supper. Nothing better!