On Wednesday, Feb. 28th, the end of this short month already, I was awake early and up at 6:30. We had made plans before going to bed last night that I was to get Bill up at 7 so we could snag a couple of washing machines, early. I didn’t have to wake him. I made my tea in my ‘takeaway’ cup and sat in my recliner with my laptop to read.

I have discovered that it is warmer sitting there in the morning rather than at the table. As insulated as our Suite is, depending on the wind direction, I feel cool air on my left side sitting near the windows. This is an easy fix and it is definitely more comfortable sitting in a softer chair. It wasn’t long and Bill was up too, making the bed and starting to sort the dirty clothes. Good, just two loads will do it!
So, Bill loaded the truck and drove me up to the clubhouse. We filled the washers, his job is putting the detergent in and rinsing the cup before leaving me to it. I don’t mind at all, he is contributing and there is no point in both of us sitting here. I took my laptop into the clubhouse, right beside the laundry room and settled in to read. I texted my sister, Donna, as usual to let her know what we’re up to today. It is 2 hours later in Ontario so their day is already in full mode.

No sooner did I send her a message and I looked out to see snow flurries. Light flurries. It is actually 34F so I’m surprised how one day can differ from another. Anyway, it won’t deter us from enjoying the day. We have a couple of things planned around here. Bill joined me shortly after I put the clothes in the dryer and we spent the last 30 minutes together and folded the laundry. Glad to have that job done.

After putting things away, (it all dried well this time, yay!) I made our bacon and egg omelette breakfasts. Yesterday, I cooked a pot of steel cut oats because sometimes I miss a bowl of hot porridge. That is the best choice rather than regular oatmeal for me on this paleo ‘diet’ and I do enjoy it. We cleaned up the dishes and what sun we did see earlier, has been blanketed by the thick gray clouds and we aren't expecting to hit anything more than 46F today.

Donna responded stating that they are experiencing a wonderful day with 51F and sunshine at noon hour. Good for them! I know it won’t last although my son was insistent that they wouldn’t get any more ‘real’ winter weather again. Not enough to stay on the ground anyway. I hope he is right and not only because I’ll tease him if he is wrong and tell him not to give up his day job. Ha ha

Now, that we are cleaned up from breakfast on a dull day, is the part I enjoy. We don’t have any obligations until 3 pm today so we can do what we want. Everything is packed up with the exception of our patio mat. When it is dry, we’ll put it away. Tanks will be dumped either tonight or in the morning and we’ll be set to pull out by 9:30 or so.

We bought 2 pineapples at Fry's, one of our favourite fruits. Bill is using my Avon pineapple corer in these pictures. Such an easy way to peel, core and slice all in 2 or 3 steps and little mess. (you can click on these pics to enlarge) 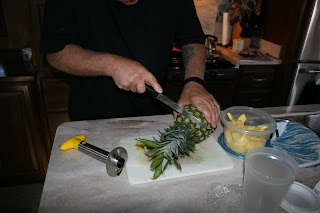 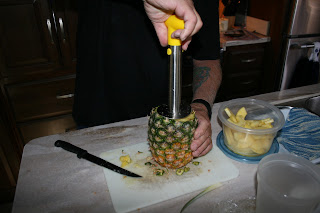 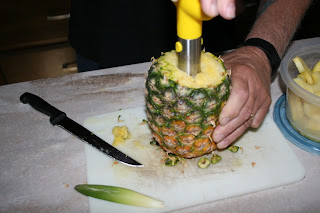 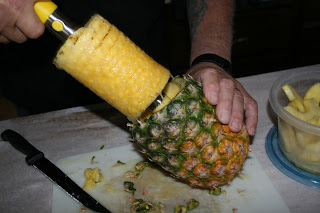 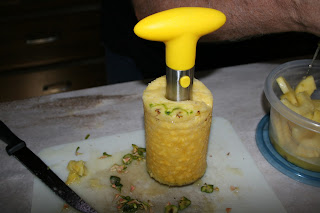 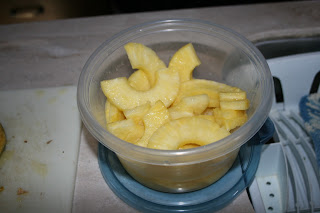 Bill worked on filling out our 8840 forms to be sent to the IRS. These are required by the United States to prove that we have closer ties to Canada. It allows us to stay 183 days in the U.S. thus allowing us to enjoy this great winter weather for 5+ months. We will always save a few days grace in case something delays our return. 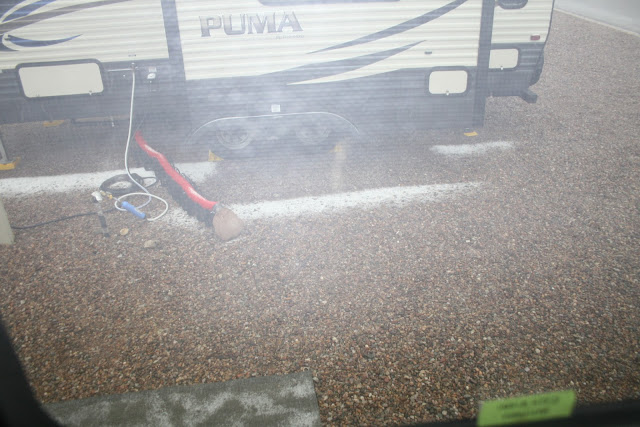 Clemson and I sat and pretty much did nothing other than relaxing and reading and playing on the internet. It was probably noon hour when I decided to bake something. Two recipes I looked at only proved that I was missing one key ingredient so I almost abandoned the whole idea. Then, I thought of cookies because I talked Bill ‘out’ of buying cookies at Fry’s the other day.

So, I pulled the ingredients out and mixed up a batch of dough for Molasses Crinkles. It indicates that this recipe will make 3 dozen cookies but I must have made them smaller as I have at least 48. I wasn’t sure if Bill would like them but they turned out pretty perfect in my convection oven and taste yummy! Yes, they are sweet but we’ll just have to control ourselves and only have a couple a day. 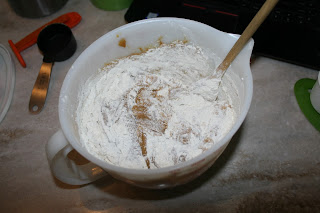 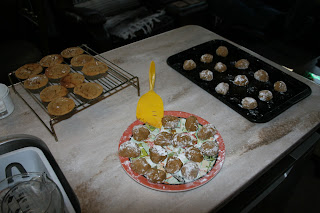 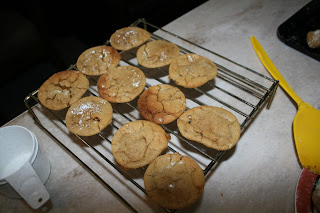 With our tea we walked up to the front clubhouse for 3 o’clock where we’d arranged to meet George and Suzie (OurAwesome Travels) and Sandy and Randy. We’d met this couple last winter at Quartzsite but we couldn’t picture them. As soon as Sandy walked in, it clicked and yes, we remembered meeting her before. I'm not sure if I met Randy before and he said the same thing about me, so not likely.

It was a nice visit as well as a nice goodbye. We all discussed our route home, rv repairs, cranes, border crossings and booze before our final hugs. From there, Bill and I walked further back to have a quick visit with Deb and Dj. We wanted to say goodbye to them as well. It has been nice visiting with them while we were here and we've all learned a bit more about each other.

Walking back home, the sky was clear and the sun was fierce in its desire to warm us up. Unfortunately, the wind was bitter and I was happy to be bundled in my 3 layers. The temperature never got above 45F today and that is not okay. Tomorrow at least, we should get our warmth back. The snow had stopped late morning leaving nothing on the ground until just before noon the sky to the west let go. I snapped these pictures within 15 seconds of it starting. Luckily, it didn’t last. 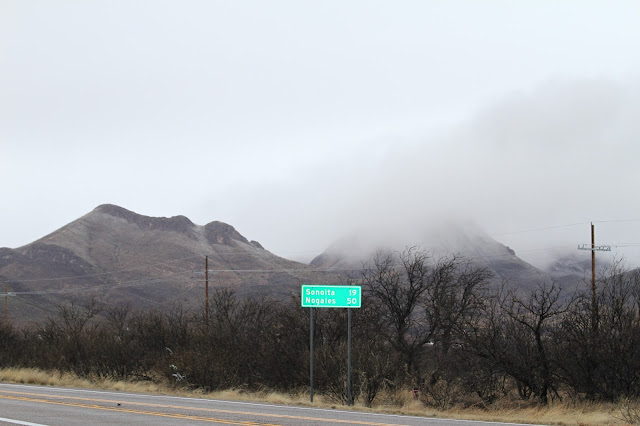 For supper tonight, we both agreed that we’d open a can of chili for Bill and I would finish up the last of my vegetable soup. I had removed the pieces of chicken that were left in it, simply because even though I trust that the veggies wouldn’t go bad, the chicken is not something I want to mess with. Bill had a bun with his and I had some buttered soda crackers hoping it would be enough to fill us.

After cleaning up dishes, Bill dumped our gray and black tanks. Two weeks here and the gray, especially, was full. Then we sat together watching an episode of The Curse of Oak Island. Interesting stuff. A true example of patience and determination in the search for a treasure. The air just kept dropping into the evening and for the last day of February, we can truly say it was the coldest day we’ve experienced since we left home on Oct. 23rd.
This has been a good day, cleaning a few things up, saying goodbyes to friends here in the park and under the surface, the building excitement of a new adventure waiting for us in the morning. We are looking forward to returning to a location we visited in November of 2016 and hanging out there for a few days. We were happy to see the brilliant sun this afternoon.

I hope you have enjoyed the day and that is was warmer than ours was. What is with the"Buenas noches", in my title? Well, unashamedly, I am trying to brush up on my Spanish. I'd learned a few basic words while I worked at the school board and Laurel told me about this free app. It is a language Bill and I think will be fun to learn.

I want to thank you for taking the time to read my writings today. Feel free to drop a line.

Posted by Patsy Irene (Chillin' with Patsy) at 8:37 PM