Dorothy Has Nothing on Us! Next Stop Kansas? Critter Day Again, What Else?

The Ridge
On Sunday, May 17th Bill was up ahead of me by about half hour and then I joined him downstairs. It wasn’t raining, we shouldn’t get the precipitation until late afternoon if the meteorologists are correct. The temperature was 9C/49F when I got up but it was windy. Maybe if I’d slipped out for a walk right then, it wouldn’t have been as strong, but I didn’t. The gusts soon reached 21 mph.

We had our drinks and then Bill had his shower. I sat in my comfy chair with my book. It is called Long Road to Mercy and the main character is Atlee Pine, an FBI agent. I wasn’t getting 'into’ the book during the first few chapters so, although I tried, I was able to put it down during distractions easily. Now is a different story and I just want to keep flipping through chapters. The last couple of days was a big help in that regard, picking it up often.

Bill wanted to take the fireplace unit out and see if he could determine the cause of the ‘ever-run’ even after we shut it off. Yes, it was fine for 4 or 5 days and then started acting up again. You can’t fault him for trying and because it works perfect often, he is able to eliminate some things. Then he went out to the Hangar. 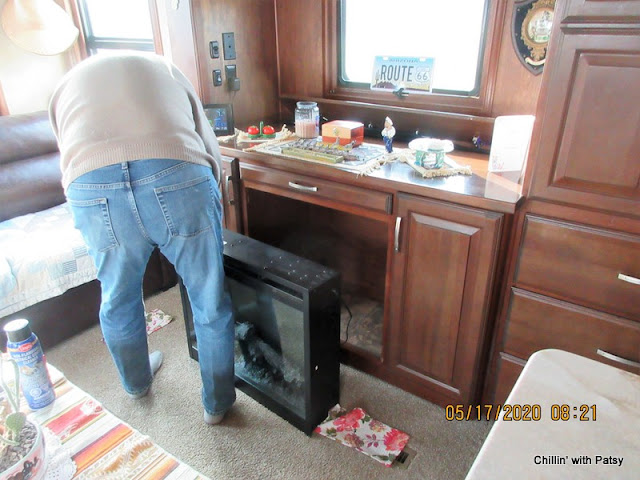 At one point when he came in his hair was in a new style. “Strong winds, eh?” was all I could comment. I soon found out what new style my hair would be in after a walk in the wind.😊
He took a coffee back out with him and I made one for me soon after. When it was done, I slipped on my long hoody and braved the winds. It’s a good thing we now know someone in Kansas as with the strong gusts, we may end up there soon! Rain and wind are the warnings for a couple of days. I enjoyed the walk despite the gusty-ness and walked to the north, past the place with the dogs. They didn’t bark as I got close so I kept on going. They must be inside.

Up over a couple of hills, I took a picture of a ‘cabin’ Bill spotted on one of the properties along Baptist Church Road. We hadn’t noticed it before and you really do have to be looking in that direction to see it. It looks to be a decent size, 2-storey and well hidden in the trees. Then I turned around and headed back. I remembered Nancy’s words for going uphill – ‘baby steps’ – and that has helped me many times to get up and over easily.

Back home, I let Bill know I’d returned and we chatted in the Hangar for a bit before I made my way up to the Suite. The Baltimore Orioles, the birds not the hockey team, were plenty this morning. 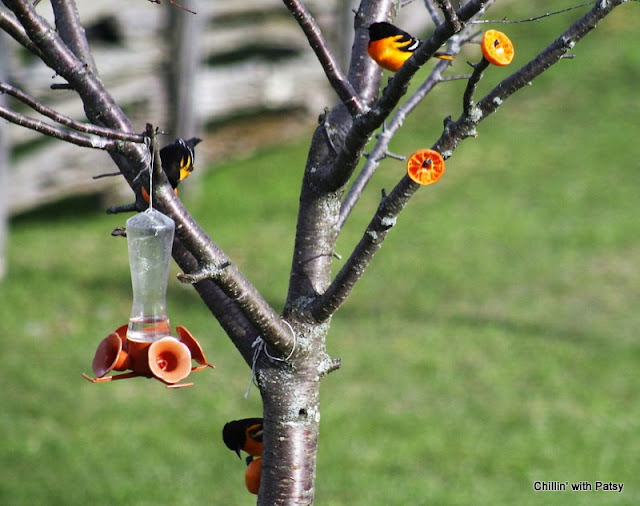 They cleaned that orange out in short work, there were 3 of them frequenting the tree. Then while we were eating lunch later, Bill saw the raccoon climb up the corner of the Bunky to where I’d hung the bird feeder. I put it there trying to deter Chippy from being such a pig and trust this guy to find it! 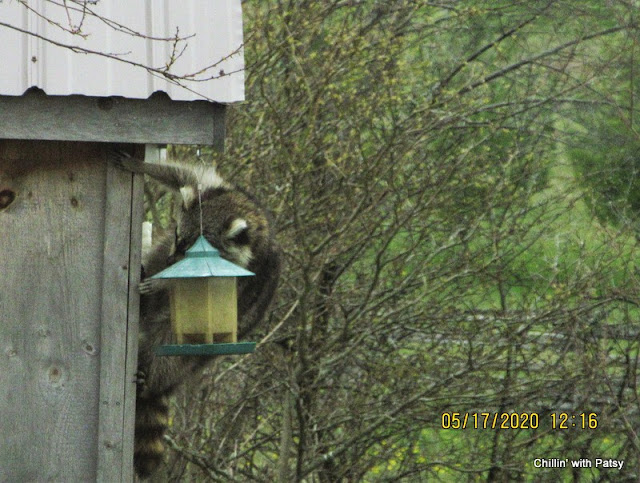 I chased him away a couple of times. The feeder is empty but the tray is not and he is doing his darnedest to remedy that. Finally, I moved it to a small tree branch that he can’t reach. The chickadees and finches were happy about that too as now they could access it again. He is going to be a pest so we have to come up with ways to deter him. As he approached our recycle bin, I threw water on him and he hightailed it off somewhere to dry off.

After dishes, Bill went out to work again and I began mixing up the cream cheese and heavy cream for Jell-o that is setting in the fridge.

My sisters and I have received notification that the yearly Walk for Alzheimer’s will be taking place in a different format. Obviously. We can still collect donations and we can still walk on our own turf. I have decided to do it here, on our country roads. I can go at any time during the day and walk as far as I want. The walk is May 31st and hopefully the weather will be in our favour. We’ve had a few cold walks!


I was tickled to see our dear friends have already responded to my email and are sponsoring me for this very important cause. Of course, I’ll be mainly walking for Mom but also to aid in the research against this nasty disease that we are experiencing first hand with her. I sent a thank you letter off to J & S and then sat with my book. If you wish to sponsor me with a donation, let me know and I’ll send you the information too.

It’s no surprise that I finished my book today, since that’s mostly what I did for the bulk of the day. I did get the Creamy Jell-o made as well and made biscuits for supper. 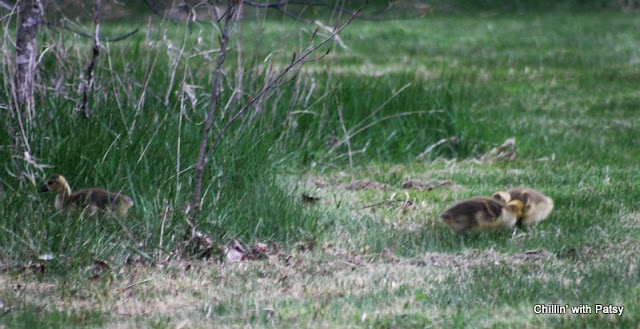 The geese showed up on our hill behind the Suite which surprised me. There were two families up there in the grass area that Bill cut the other day.

I’ve never seen them up there before. They were really honking as they made their way down over the steep cliff  to the pond. Babies and all. 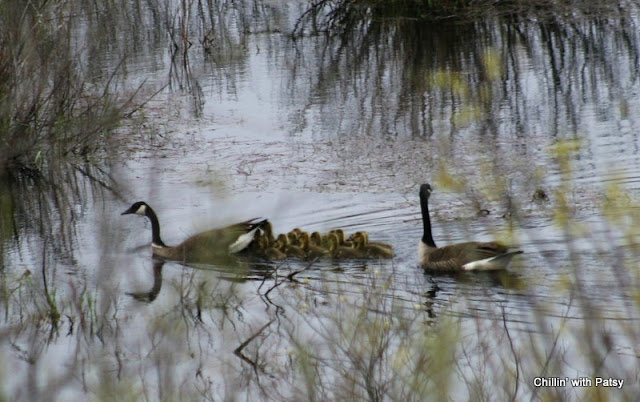 I just had to bake the biscuits and reheat the leftover chili so at 6, I called Bill up for supper. As always, chili is a nice easy meal and it tasted just as good the third time. 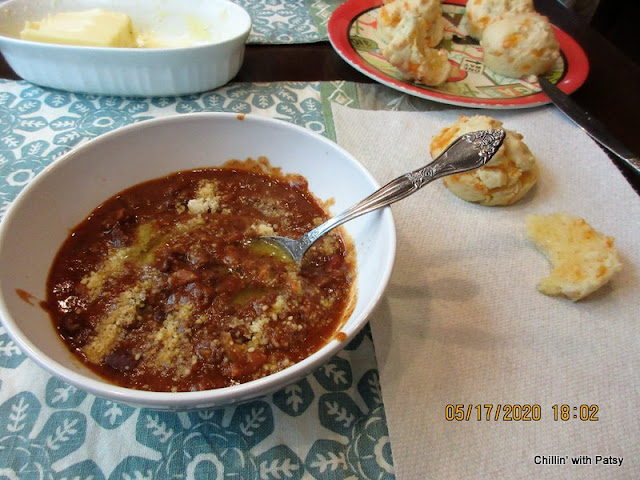 This was definitely an inside day for me, only venturing out this morning a couple of times. We didn’t get much rain today, just a bit between 5 and 6 and likely we'll get more through the early morning hours. Tomorrow sounds like a wash out. I enjoyed the quiet time to finish my book and now I’ll have to see what I can find to read next.

Thank you for stopping by. Your comments are always welcome.

Posted by Patsy Irene (Chillin' with Patsy) at 6:32 PM