The Ridge
Tuesday, May 26th. We woke up to a hot day. It has got to the point of sleeping with a cool sheet only and as few clothes as possible. With the chorus frogs, my bed mate can’t drop off to sleep if windows are open, they are crazy loud. Bill, like many, doesn’t use ear plugs. Luckily, I can open my little side window and with the blinds pulled 95% down, I get the fresh air and he doesn’t hear the 'music too much.

As it turned out, he didn’t sleep well last night anyway. I think I did but I dreamt a lot, not sure. I felt ‘busy’. I was moving out of bed by 7 and found Bill already downstairs opening blinds and making his coffee. I saw that it was already 19C/67F at that time so I knew I could skimp on the walk-wear. I was in capris but slipped on my lightweight hoody just so my arms were covered. I didn’t want to encounter bugs and not be prepared. With a dose of Pest Away (a repellant that my girlfriend makes and sells) off I went.

It was a nice walk, warm but nice. As I turned into our lane on my return, a Mother and Father goose were escorting their 2 young’uns ahead of me. They slipped into the dock area of the pond and swam away to safety. Back inside, I made a tea and sat to enjoy some blog reading. Since our small mower doesn’t have a blade yet, Bill got the Cub Cadet out and did a great job maneuvering around the smaller area to cut the grass up here. We’d moved the table and chairs out of the way. 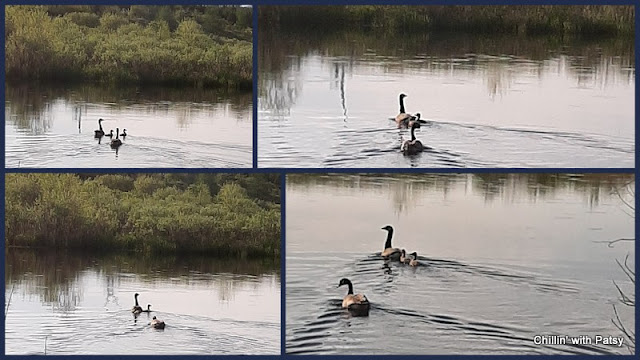 It wasn’t to be though, as he ran out of gas over half way through. It is kind of funny now but at the time, he didn’t know that was the problem. Let’s put it this way: the spark plugs got a good cleaning, the oil checked and now it has a full tank of fuel. 😊

I’m glad that is all it was because the morning was already going downhill. When I finished my tea, I felt a bit of a headache so had some strawberries and cream before slipping my work jeans, runners and hat on and went outside.

With the luck we’re having, I expected the whipper snipper (weed-eater) to give me grief but I filled it with gas and Bill got it running pretty easily. Mine is a light weight version and that is a ‘thank God’ moment for me every time I pick it up. I just don’t have the strength in my arms to work his big one for more than a few minutes. I trimmed around the Bunky, along the woodpile, the corral fence, the firepit, the flower beds and little trees. That was just over half hour’s work and this ole gal was done for.

It was time for lunch anyway so I sat on the patio until I cooled down and Bill came over. We’d turned the a/c on to the downstairs this morning before going out. When we walked in we expected to be greeted with moderately cool air. Nope. It wasn’t blowing cold air at all. Good grief! Give us a break! Bill turned the bedroom unit on and immediately the cold air poured out of the vents. Hmmm. He’d said earlier that he thought birds were in our 'belfry'. I mean, in the a/c vents. Could be?

I was feeling very light-headed from working in the heat and had to go lie down in the coolness upstairs for a while. Unfortunately, I suggested Bill get himself something to eat as I wasn’t up to cooking anything for lunch. He had no problem with that, not wanting it to be any hotter inside than it already was. I also had 2 crusts toasted with jam and peanut butter. Starting my blog post was next and then we’d see what the rest of the day brought.

Actually, not much took place after that. I walked down to get the mail and Bill put garden things away and retrieved a few things from his cargo trailer and Hangar. We were done for the day and came inside to a bit of a change from when we went out. The bedroom a/c had distributed some cool air down to the main floor. We watched NCIS and I know I dozed in my chair a bit. The time came when I needed to start supper so Madame IP came out of the ‘closet’. 😊

While I was starting the meat sauteing, Bridgette returned my phone call from the other day. We had a nice catch up chat. Meanwhile, Bill was on the roof cleaning bird’s nests out of the a/c’s. I don’t think there was completed nest but 2 had been started. At least he had no peeps to deal with but when he came down, we were feeling an improvement. The chicken thighs and pork chop had to be eaten tonight and they were just as tasty this time as they were the other night. On the side we had Caesar salad and then the last of the Jell-o for dessert. 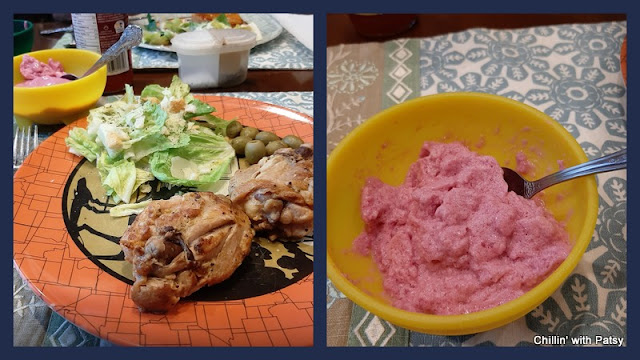 After dishes, I took a walk down the lane before coming in for the night. It was cooler outside than in but no breeze whatsoever so there was no point in turning things off and opening windows. Sometimes we feel stuck between a rock and a hard place with the decision but the trick for us is to stick to what we feel is working. With a trip in to the city of London tomorrow, I had some gifts to pull out from under the bed in the hopes of connecting with a couple more of our children while there. I did that before bed.

Remember the book that I’d started and didn’t seem too keen on? Well, I gave up on it. Sorry, Gayle. I just couldn’t get into Moranna, An Audience of Chairs was too slow paced for me to become engaged in it. I’ve closed it on Goodreads, wrote a brief review and rated it. Now it is time to read something exciting. James Patterson’s Private London should do the trick. I settled down after my walk and focused on the first few pages. Immediately, it had me. 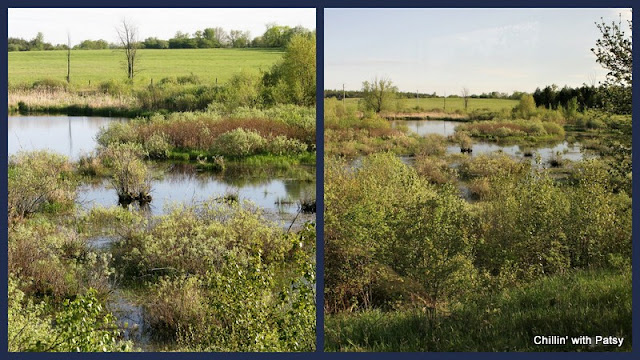 I hope you’ve managed to keep cool (can you believe I’m saying that?) during the summer blast we’re experiencing. My daughter and I were laughing that 15 days ago she had snow on her drive to work. Her birthday. At least that is a past memory.

Take care and thank you for stopping by!