The Ridge
On Sunday, May 31st we’d reached the end of this silly month. Was it winter? Was it spring? Was it summer? I do believe we experienced all 3 and probably fall too, all in 31 days. Hopefully this day will be the last we’ll see of the single digit (C) temperatures until – well never. 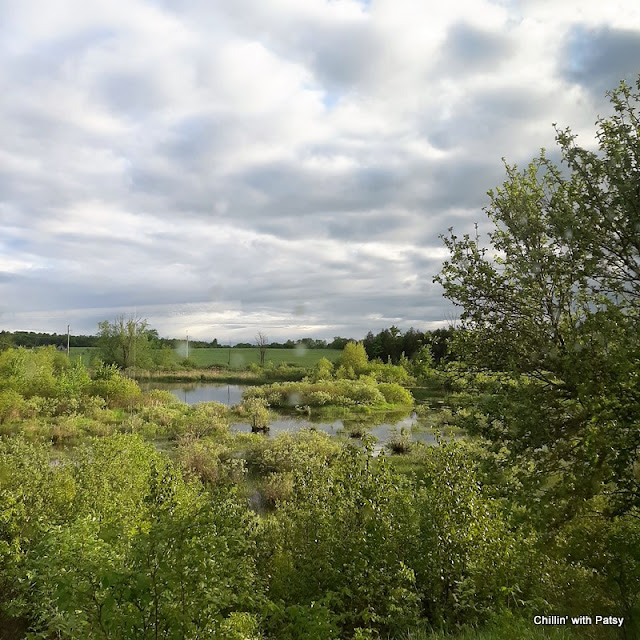 Bill was up at 6:30 ish and I lazed until closer to 7 before I got up. I didn’t have to think about an early walk since I’d be doing the Alzheimers walk later. We had our morning drinks together and Bill kicked the furnace up a notch so it would run a cycle and take the chill out. It was 15C/59F and a chilly 6.5C/44F outside. All I cared about was that it didn’t rain.

The clouds played some tag for a while and Bill went out to start whipper snipping around the yard. I love it when he does that, he does such a good job. I laid out my walk clothes and then went out to see why he’d stopped. No, I wasn’t cracking the whip, just putting in time. Marilynne had called while he was working so we called her back and caught up on her news and shared ours. Then it was time for me to get on the road.

It was 9:30 when I headed down the lane, North Line and onto Baptist Church Road. I do this same route many mornings but today it was for a purpose. 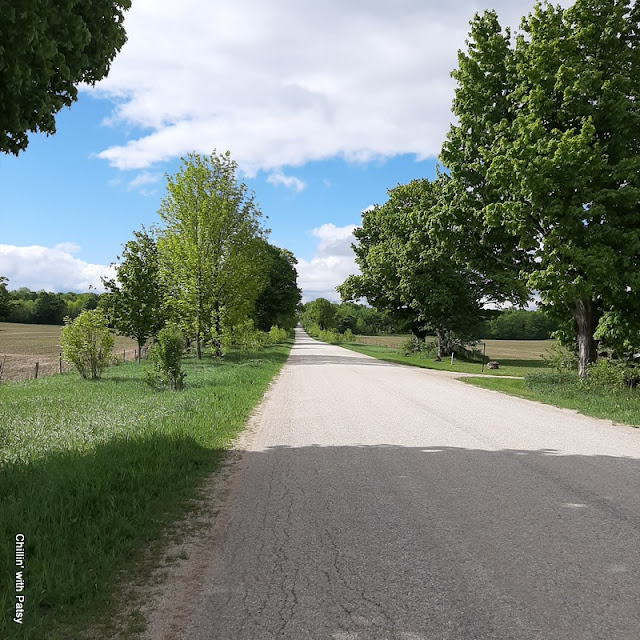 I told Bill that I might push it further and in my head I told myself that I might go to the corner of B.C.Rd and County Rd. 4, the highway. The sun came out in timely fashion and for the whole of my walk there was a lot of back and forth going on in the sky. Clouds, sun, wind etc. But it was fine and I was dressed perfectly.

Bill had gone into town and back for gas for the mower and trimmer and passed me both ways. When I returned, I retrieved my Canon and tripod and set it up in a suitable place to take a couple of pictures. Bill was still trimming when I packed things up and came inside to make brunch. I cooked mini sausage and scrambled eggs and we were both hungry for them.

While Bill did the dishes, I had my shower and then he had his turn in the bathroom. Outside, I filled the 4 bird feeders and watered the lettuce and pumpkin plants I’d brought home yesterday. They were in the Bunky overnight. While at the hand pump, there was the little tree frog again. Hanging on with his little fingers, he was over the edge of the picture frame, eyes closed. Aah, so cute! How’s he holding on?

We left the Suite at 12:30 and drove to Alma for the last visit of our children. Krystal and Matt live the closest but that is just the way it worked out for all of us. Weekdays wouldn’t work for them as they are both working during the week. Krystal at home and Matt for Stoltz between Listowel, Elmira and Mildmay. They were working hard spreading mulch around their property and were happy for the break when we arrived.

We sat in their garage with the door open, just enough to be out of the wind but still outside. The sun was nice but if it was hidden by clouds, it was quite cool. We had a nice visit for an hour and a half and headed home around 3. (ps – thank you for the hugs). Having a busy morning and a nice drive and visit in the afternoon tired us old folk out. When we got home, I made a cup of tea and Bill went up for a snooze. It wasn’t long and I could hear that he was successful. 😊

For supper, we’ll either have leftover spaghetti and salad. A nice simple but delicious supper for a busy Sunday. The temperature got up to 13C/55F today and as I type this at 4:30, the sky is blue with minimal wispy clouds up there. I was surprised that there was still seed left in the feeders, with Chippy on the loose. I’m going to have to get creative with where and how I hang one of them at least.

I heard from the rest of the ‘walkers’ on our Sunflower’s Marchers for Memory team and the number of steps taken today were a total of 59.43 km/36.92 mi. I’d say that is pretty good! Yay team! 6 of us raised $1,000 for the Alzheimer’s cause and 5 walkers joined my sister in Teeswater for support. It was an awesome effort from my family if I do say so myself.

While Bill was upstairs, I took my book outside and sat in the sun for the biggest show of the day. I meant to be reading but once I saw Chippy trying to get to the feeder, I was too distracted to open my book. It was just too funny to describe but he eventually figured out that he couldn’t jump from the flower pot edge up to the feeder. Instead he risked life and limb climbing the tree, scaling the branch and diving head first down into the feed tray. Ejecting himself straight to the ground was his exit strategy. 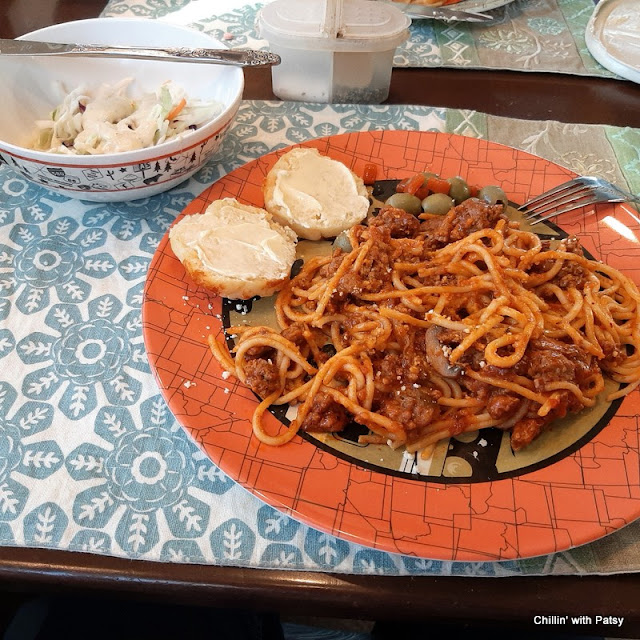 At 6, I had 3 chapters left and moved inside. Bill was finished dozing and a movie at the same time. Our timing was perfect again. I started warming up the spaghetti and got coleslaw out with the 2 leftover biscuits from last night. It was just as good the second night and we topped it off with a piece of apple pie. I added heavy cream to mine and all holes in my tummy were full when we finished. After dishes, I sat to post my blog. I’m feeling exhausted tonight

Bill sat at his new laptop, which is 90% set up and started writing a new post. This has been a great day and I wouldn’t change a thing. I hope your Sunday was a great one too.

Thank you for the visit. You are welcome to leave a comment if you wish.