Paradise by the Ridge Morning Light, A Gift from Above?

It was 6:15 when I first opened my eyes enough to see the clock on Saturday, May 23rd. The bed was empty beside me. In my deep sleep, I didn’t even hear him move let alone get up. The door to downstairs was closed indicating he was letting me sleep. About 20 minutes later I got up. He was downstairs drinking his coffee so I checked the temperature outside and after a good morning kiss, went for my walk.

Already 11C/52F and no wind at all was encouragement to wear just my Az hoody and take my bug hat in my pocket. The added weight this morning was my large Canon camera. The strap isn’t as long as Bill’s, something I’d like to rectify one day – inexpensively, but I put it over my head anyway. If I’m in the dropsy stage, I don’t want to take a chance. LOL It was a lovely walk down Baptist Church Road and back to the tune of a tight 2 miles.

Back home, I made my tea and sat reading on my laptop. The reason for the title of my post is because today is a ‘special’ but sad day. It was 2 years ago that my father-in-law (Dad) passed away. It doesn’t seem possible it has been that long and yet in some senses, it seems longer. Sad in a way that life just keeps plugging along at such a pace. Yet, again, it is a good thing it does or we’d all be at a standstill.

We miss him terribly and at the same time are very glad that he isn’t here to see what has become of the state of our world. He is in a better place right now but that doesn’t make light of the heart pangs when we think of him. We are sure Dad is sending this good weather down to us on this memorable day. He sure loved the heat and the sunshine. Love you, Dad. Before we got any further in our day, Bill called Marilynne to see how she was doing. We all share this loss today and it's nice to touch base. 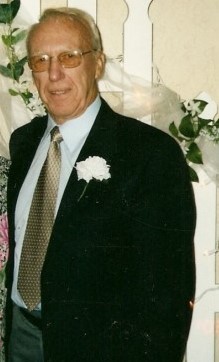 Bill made a second coffee and put a string of solar lights around our little damaged tree. He also got out the bag of individual solar lights and placed 5 around the gardens and those without pegs, in the trees. I’m anxious to see them tonight as they are certainly getting enough sunlight today. Speaking of which, we are getting bonus hours from our solar panels these days. That makes us happy.

When my tea was finished, I also went out to the Bunky. Nothing else to do, really, but open the outside doors and sit and paint rocks. I was on a roll and with the radio playing the rock classics, I was quite content.

I chatted by text with Donna this morning and she is doing well and then a chit chat with my buddy, Pat. They are also doing well. 😊 It was 10 when I was ready for my coffee so made that and took it back out with me.

Within an hour, I had enough rocks ready to be glossed with a clear spray. Outside on a couple of boards I spread them out, flipping them after a few minutes to do the other side. I was running out of ideas to paint so had to search for some on FB and Google. There were a lot of fun suggestions and so I ‘stole’, er, borrowed some. I just enjoy ‘trying’ to replicate the professional looking faces and cacti. 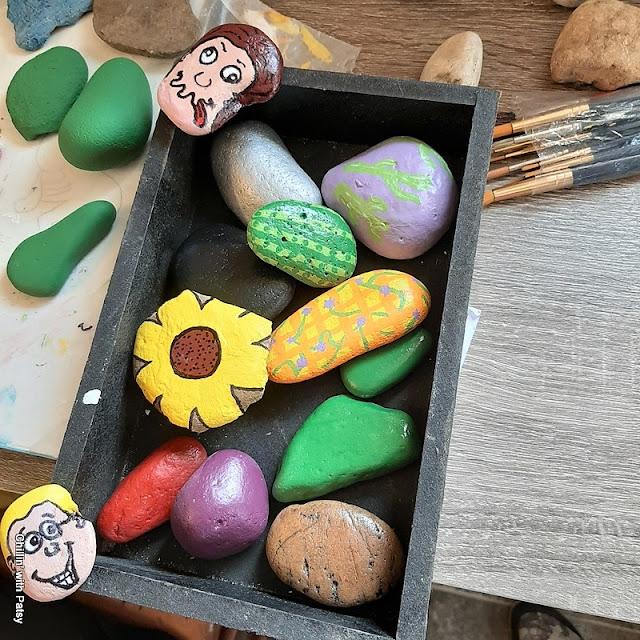 I took a walk down the lane around 11:30 and the pesky flies seemed to be non-existent until my walk back up but I had my netted hat in place. Deb D. would be happy, but we’re not particularly, the front field is already dotted with bright yellow dandelions. Bill just cut it the other day. Obviously, that just spread their glory around even more. I don’t hate them and we’ve never made huge attempts at trying to contain the persistent weeds. (Sorry Deb but they are weeds 😊

Bill had grown tired of the job he was doing on his plane and was at a point where he needed to take a break anyway. When he moved inside the Suite, I followed and prepared to make our lunch. He suggested something different and I was all ears. He felt like just having a peanut butter and cheese sandwich and that worked for me! I boiled some water and had myself a Ramon noodle soup. It said Spicy Chicken and they weren’t kidding but it was good. I had water close by. 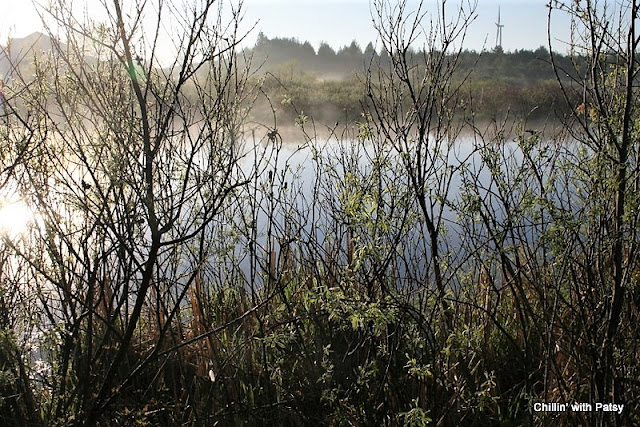 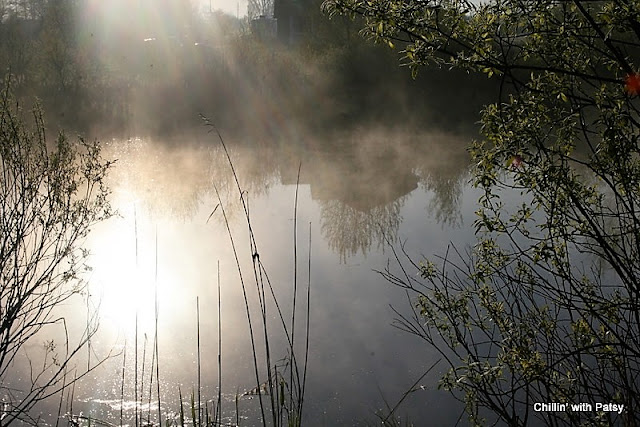 I had the ingredients out to make a cherry pie for my sweetie but since he was dozing in his chair, I sat beside him in mine. I don’t know why I’m feeling tired too but there you have it. We both rested. Before Bill dropped off, or just as he did, Gerry called to say he was on his way to Owen Sound to pick Donna up from the hospital! Wow! She must have been a model patient and they are sending her home a day early. Good stuff!

Mid-afternoon I made a cherry pie and an apple crumble pie but didn’t bake them until around 5 o’clock. It was already warm inside the Suite. 27C/80F outside and 26C/79F inside. Well, that’s not too bad. We’ve managed to keep it cooler in here with the awnings extended and windows open. There was a nice calm breeze coming in the windows and while the pie baked, I went upstairs for a nap. I had set it for half-time so I could remove the tin foil around the crust and then cooked them for another 35 minutes.

They were done just after 6 and I warmed up the last portion of lasagna and put Caesar salad on our plates. It was just enough, especially with a piece of cherry pie for dessert! I wanted to mix up some whipped cream but didn’t get that done so tomorrow I’ll do that. Bill loves cherry pie, it’s his favourite, so he doesn’t need anything else with it. It is pretty sweet for me so I’ll be happy with the topping. 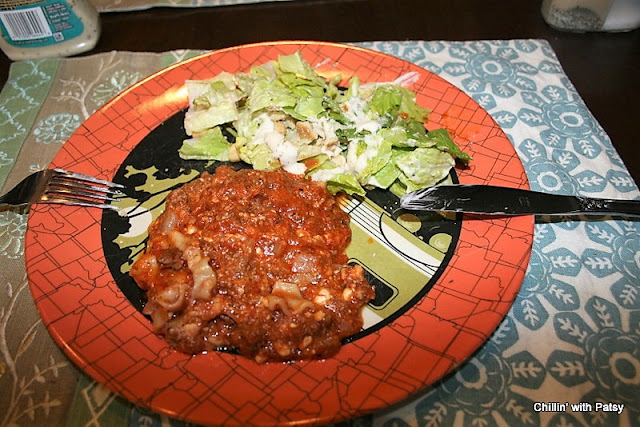 It was a great day. I didn’t notice as many of the black flies today and later this afternoon when I sat outside on the patio, only a couple made themselves visible. Maybe this is the end of them already. Fingers crossed. 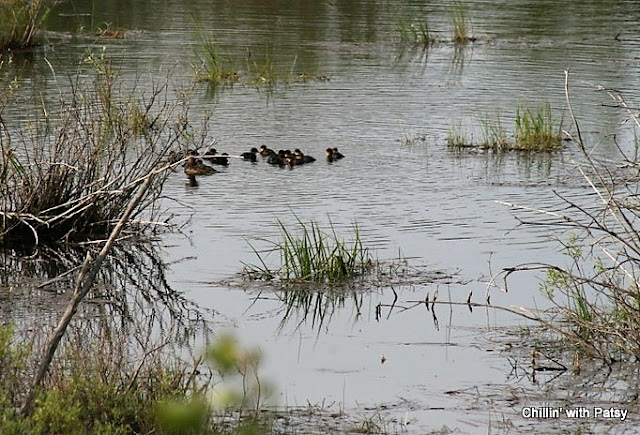 I got some rocks finished, some baking done and the floors swept. That’s enough for one day. After dishes, as I was sitting typing my post, look what I saw out the windows. More babies!!

I hope you have had a wonderful day and evening. Thank you for popping in to see what we’re up to.

Posted by Patsy Irene (Chillin' with Patsy) at 7:07 PM