Alone Again in our Routines, Kobo Lesson, Rav Top Up, Puttering Around

We were up on Tuesday, Aug. 7th at 7 am and it was a foggy start to the day out here. Off in the distance, nothing too close. We enjoyed our first coffee and tea together while I finished my 2-day blog post. Sorry about that, folks, it was a long one.

Hopefully there were enough pictures so you didn’t get bored! It was a great couple of days and the busy-ness was more important than making sure a post got sent daily.
Bill checked propane tanks, thinking he needed to fill one, but they were fine and did not need a refill at all. But we did need gas in the Rav.

He drove to Durham to top up the fuel at Esso, which was up this morning and made a bank withdrawal as well as located some Warfarin mouse catcher stuff. Yes, we’ve discovered that one or two (?) have found a way to get into the Suite, up through the hole in the under-sink cupboard, into the garbage can and straight up into the linen drawer. Little beggars!

Once previously, we noticed their little black droppings in that drawer but this time, he/she/they managed to drag a couple of peach pits, some lemon rind from Saturday’s dinner and even a plastic cream cap up there! Time to take action, so Bill bought this poison today. It isn’t anything we have to worry about Clemson getting into since it is placed back behind the garbage can, in the cupboard with a drink of water to encourage them.


Bill had a task fixing something on the tonneau cover on Black Beauty. Don’t ask me, I wasn’t involved and if he told me what was wrong, I don’t remember. Anyway, before he went out to do that I made us bacon and eggs to fill our tummies. It was noon hour when he came back in saying “another job well done!”

The towels and swimsuits we wore yesterday were still in the Rav so he brought those in and I hung them on the clothesline. His jeans and a pair of jean shorts that weren’t quite dry when we left yesterday got a 2nd wash in the overnight rain so they are also still hanging out. Remember when we wanted to wash our jeans over and over to get them to fade? That doesn’t happen anymore since you can buy them already faded (for a fortune!).

Inside, I downloaded 3 Free books from a site my sister, Gayle, sent me. I hadn’t used my Kobo for a very long time so got it out and made sure it was charged up. Unfortunately, when I opened the app it needed an extensive update. Because I don’t know how big the update is or how long it will take, I didn’t go ahead with it. Maybe I can update it one day when I’m in town at Rob and Pat’s. I don’t think they’ll mind. In the meantime, the books can wait, I still haven’t finished the hard copy that I’m reading.

Bill and I had some yogourt and I sorted through some pictures and backed up my July photos onto my external hard drive. He went back outside to continue to work on his Stinson Reliant plane engine. Still no luck, says he needs a new receiver so ordered one from AVF. Frustrating for him, for sure. 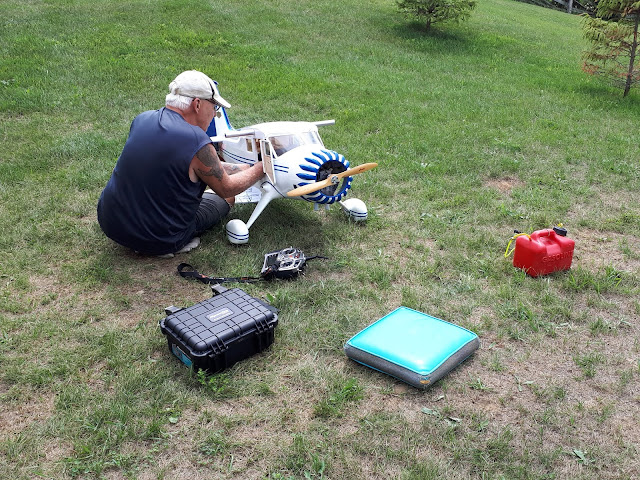 While he was outside, I wanted to get a picture of me in the dress I wore yesterday, since no one else takes pictures. Haha If you remember the picture I took earlier I’m hoping you agree that it looks better on someone than it did on the hanger. 😊

Donna also wanted us to send updated pictures for Mom’s poster board. For some reason, a while ago, Mom took it down and removed all the pictures. I hope it wasn’t a day she was mad at us for something. That would be sad. Anyway, Donna slipped the board home and will put pictures back together with our names. A different picture of me is in the works since in the last one my hair was up in a clip. Mom said I didn’t look like that.

It was a lazy afternoon, for me, at least, and it felt great. No obligations to go anywhere or do anything. Other than bringing in the few clothes off the line, a walk down the lane, harvesting veggies and prepping supper, I haven’t done much at all. I’m so close to finishing my book that I may have to do that before America’s Got Talent starts at 8.

At 5:30 I got the last two cobs of corn out and 2 chicken thighs and 2 pork chops seasoned. Bill lit the Weber and grilled everything up. I boiled the corn inside and set the table. There was about 3 servings of Cabbage Salad left from yesterday so we each had some of that as well. 1 chop and 1 cob of corn is for Bill’s supper tomorrow night. 1 thigh and salad will be mine.


Bill is heading to work in the morning after almost 2 full weeks off. That will be a real change, just after getting used to being home.  It has been nice but he’ll miss the paycheck at the end of the week! Supper was very good, I really enjoyed the chicken. After dishes he made up his sandwiches for tomorrow and Thursday’s lunch. At least it is supposed to cool down a bit, I think, so he won’t be working in 30C temps.

He got his new Visa card today after cancelling the old one but no, no money returned yet from the scammers. I’m not holding my breath, life is too important to me. I do still hope that it isn’t a lesson learned the hard way. Oh! Some good news to report. I actually purchased a couple of lottery tickets last Thursday at Foodland and when I checked yesterday, I won $10 on one and a free ticket on the other. Yay! I think that was from rubbing Rose and George’s lucky shoulders. 😊

The temperature today has been 26C and above so plenty warm. No complaints, there is always shade to find. The humidity is down somewhat which has been nice. I’ve been messaging back and forth with our friend, Deb D. in Escanaba, Mi tonight. Nice to stay in touch with our friends. Sounds like we’ll see her and Tom in Quartzsite again this winter. That is great! And Shirley and Ken in Nevada have it in their sights too. It will be a real ‘family’ affair again.


I finished working on my post too late so AGT was already on. This has been a nice, quiet day. I hope yours has been a great one too.

Posted by Patsy Irene (Chillin' with Patsy) at 6:22 PM

Email ThisBlogThis!Share to TwitterShare to FacebookShare to Pinterest
Labels: Garden fare, Just the two of us, Kobo
Location: Priceville, ON N0C 1K0, Canada