Waking with My Sweeties, Overcast, Clem’s Haircut, Visit with Buddies

It was 6:30 when we woke up, together and Clemson needed out. Then we crawled back in bed for another hour and a half! It wasn’t a late night but with no afternoon snoozes for either of us yesterday, we obviously needed the rest. I could not believe the change in temperature when Bill arrived home last night and it was even cooler this morning at 55F/12C. Brrr but we slept well with just the sheet and bedspread.

What’s with the weather going from one extreme to almost the next extreme. It would just be nice if it dropped 10 degrees, not 30! Anyway, many of you will be happy with the change and it does allow for more outdoor activity, if only the rain stays away too. It was drizzling when we did get up so no walk for me this morning. We made our coffee and tea and sat reading blogs etc.
I have been checking our daily WiFi usage all month and we are obviously too busy to be on-line much. The last couple of days seems like we’re giving back what we didn’t use so we’re Googling whatever we want and opening email attachments. It is too bad you can’t bounce the unused mb onto the next month but it doesn’t work that way. We finished our drinks and Bill went out to check on the mower for me. He agrees that the blade needs to be tightened with wrenches so he’ll take care of it.

Clemson had a haircut scheduled for 1:30 but when Bill read the appointment card, he missed a “1” and at 11:30 we showed up at Bath and Biscuit. Kate was surprised to see us (no doubt!) but had a free hour and gladly took Clem right then and there. We informed her of his past episode with Vestibular disease, explained it and left him in her capable hands. We drove around to visit Rob and Pat after fueling up the Rav4 at the Esso.

We picked the little skinny guy up at 12:30 and I’ve decided we need to bring Kate along with us to Arizona so she can keep up with his cuts. She does such an excellent job and I’m sorry but I’ve said that before. Back home, we each made ourselves a coffee and I treated Bill to the taste test of the cheesecake cupcakes. Well, of course, I had to try one too.

OMG! I’m making these again and the only thing I would change, besides doubling up the ingredients to the original recipe, is to make the crust thinner. I wasn’t sure how they’d stay together and now I know. If you want to try them, have patience with pressing the ‘dough’ into the silicone muffin cups, and I can email you the recipe. the link I tried adding didn't work. Send me your email address. I baked them for 25 minutes in a convection oven and they were perfect!

As we were sitting here, the clouds began shifting and blue sky was visible. I’m facing the back of the Suite and on the fence post this bird decided to land.

I don’t know why it caught my eye but I do think I have a perception for things and this was one of those times that I’m glad I do. Upon researching it afterwards, we believe it is a Cooper’s Hawk. How cool! He was so pretty and turned a few times as he must have sensed we were watching through the window. I missed his flight but maybe another time, that was exciting! 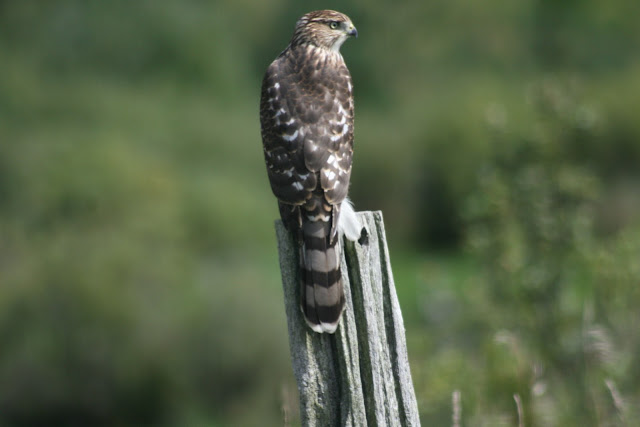 What a beautiful hawk!
Look at his gorgeous tail.


I sat for a while at my laptop and zipped through the route we took last winter by perusing my blog. It is interesting to go back and see the pictures and read some of the comments. Some of you have been with me since I started posting and some joined me last summer and even more through the winter. That is also exciting to me. I had notes that I hadn’t completed, hand written notes from our travels and wanted to update them.
Then it was time to move. Bill had tightened and sharpened the blade on my mower so it was free for me to finally cut the lawn. It was a good day for it, not getting above 67F. Bill was exhibiting a headache earlier and although he wanted to do some things down at the Hangar, I could tell he wasn’t feeling up to it. He went upstairs and laid down and Clemson joined him, jumping up on his own. I moved the cushions yesterday because they seemed to confuse him.

I changed into shorts and a tank top and went out to cut. I don’t know how long it took me but I do know that the mower cut great. It was quite hot in the sun, with all of the walking back and forth. That perception that someone was watching me caused me to look up when I was starting down the hill. I looked up and saw Bill at the door with my camera, snapping photos. That made me smile because I’m always saying there are no pictures of me anywhere unless I put the camera in his hands or I’m taking selfies.

I made the motion for a bottle of water and he brought me out one before hopping on the rider to cut some grass of his own. It sure grows fast when the rain is so plentiful. When I finished, I plugged the battery in, put the mower away and sat to cool down. It felt good to have the chore that I’ve been wanting to accomplish for a few days, done. As I sat there, I was entertained and a little scared at the same time watching Bill cut the berm with the mower. The way he goes up and down the steep hill is a little dare-devilish and I don’t even want to know what he did in the corral.

I decided to light a fire and burn some of the cardboard that has been building up since our friends left in early August. It has been too hot since then and now I found it to be too wet. A few pieces caught so I added some kindling and larger pieces of wood. Clemson was still up on the bed from his nap with Bill, stretched out real comfortable-like. We know he loves it up there so hope he gets confident about going up there soon.
When Bill finished cutting, he poured himself a drink and came and sat with me. He suggested once it got going really well that I should burn Daddy’s sunflower box. It is probably over 50 years old and he painted it a couple of times and I did as well after I took possession of it in 2010. It is so rotten and falling apart that it no longer would hold wood anyway. So, I did. It created a nice fire and I know I was forgiven. 😊 Daddy always liked a good campfire.
When the air started cooling down, Bill closed up the Hangar and his cargo trailer. It was after 6 and time to start supper. I hadn’t even given it a thought but Bill had already decided. He wanted toasted tomato, bacon and cheese sandwiches and that sounded good to me. I fried up the bacon and he toasted the bread. We added lettuce and mayo and sliced my little garden tomatoes. What a great easy supper after what turned out to be a busy day!

We cleaned up dishes and settled in to watch some tv. I actually had to close the one window beside me tonight and not to turn the a/c on. The air had cooled off to 64F which wasn’t much of a drop but it made a difference without the sun.

I slipped out to take a couple of pictures of the pretty clouds tonight and ran back in with goosebumps. The rest of the pictures were taken from my window, inside the Suite.


I hope you have enjoyed your day today as much as we have. Thanks for stopping in. Your comments are always welcome.