Was That a Storm? I Believe I Slept Through it! Much Needed Grocery Stockup

First time that I woke up on Wednesday, Aug. 29th was at 3 am. I had opted to put my ear plugs in, which I don’t normally do when I’m alone, but with the rain and storm on the horizon, I didn’t want to lay there listening to it. Clemson dropped off quite quickly sprawled across Bill’s side of the bed and I soon drifted into my own dreamland state. I was trying not to think of the possible threats from the sky.

So, when I woke at 3, I knew the heaviest of the storm was to be around 2:30 to 5 I took my ear plugs out to get a feel for what it was doing outside. It was quite calm so I went back to sleep without them. At 3:30 I was awake again and I noticed that Clemson had jumped off the bed. I went on a search, thinking he was at the door to go out but he was up in his bed on the couch. Hmm, that is very odd.

I didn’t disturb him and went back upstairs to my own bed. Then the heavy rain, or was it hail, started. My ear plugs went back in and the next thing I knew, it was 7. I didn’t move until 7:30 when I reached for my phone on Bill’s pillow and it chirped. In other words, ‘you have a text from your sweetie’. 😊 Bill was wondering if I survived the night, since I hadn’t texted him yet. He called, we chatted and then I got up to greet the day.

Clemson never returned because he still isn’t sure about jumping up on the bed, even with the pillows I’ve placed there. Oh well. I came down and walked around the island to turn the Keurig on and open blinds and stepped in a wet spot on the carpet. Oh dear. The poor little guy DID have to go out and Mom didn’t help him. I cleaned and sprayed the area and then went outside for my walk.

It was 68F/20C but I wore my light hoody anyway. The sky was a repeat of the last morning or two....... or three. It was a nice walk down to the turbines and back and as yesterday, the hoodie came back wrapped around my waist. Obviously, I’m no judge of what to wear first thing in the morning. When I returned, I tried once more to cut the lawn. I went through the same motions as yesterday.

I placed the charged battery in, running shoes, hat and gloves on and I got the same sound as before. It obviously isn’t that the battery is dead. Something else is afoot here. The blade seems really loose and clanging but no matter what I tried, it wouldn’t tighten and wouldn’t stop the noise. I hate giving Bill new jobs to do but he’s going to have to look at it tomorrow.

So that is that, again! I came inside, made my tea and sat at my laptop to catch up on yesterday’s news. Bill will have a busy day today with 3 orientations so it will be a long day for him. To make matters worse, he has an 8 or 10 item list of things to get at Costco. With his boss, Nicole, on vacation this week, he says it is highly unlikely that he’ll be needed next week. That just means to take advantage of Costco when he’s there today. Unfortunately.

I’ll worry about him driving home late, and hope he listens to his body when it is time to stop for a rest on the way. He says he will but he is a man and can be very stubborn. God love him. He lets me know when he is on his way so I can judge pretty well what time to expect him.

Okay, so today was shopping day. I’ve been compiling my own list for groceries for shopping here at home. We have not done a ‘big’ spree for a while and I’m feeling the pinch when I try to plan meals. It is good to use up the meat that we have in the freezer before filling it up again so I was looking forward to more variety. It seems pork chops (crappy ones at that) and chicken are the choices we’ve had for a while. A trip to the West Grey Meat Market is in order for tomorrow too.

I finished my tea, cleaned up and drove to Hanover just after 10:30. Grant’s Independent is a hopping grocery store and it is very unfamiliar to me. I’m just getting used to Foodland in Durham and it is a much smaller store. So, I checked my list faithfully and filled the cart before getting in the checkout line. There was an opening behind one person who was paying so I lucked out. When I left there, I drove to the back side of town and picked up a loaf of bread at the Bread Depot.

By this time, I was quite uncomfortable having overdressed AGAIN! I was home unloading by 12:30 and it was then I realized that I forgot to pick up the 2 packs of cream cheese. Everything else got crossed off the list. I didn’t do too badly and there were a lot of flyer specials for things I needed. Yay! I like to have cream cheese on hand for when I want to make my favourite dessert. Anyway, I’ll pick it up next time I’m in Durham. I was feeling hungry so had a piece of rye toast with peanut butter. Ooh, so good.
It is a very muggy day again although the temperature for outdoors is only reading 73F/23C. I know that it feels closer to 80F/27C at least. I’ve left the a/c on and it is keeping the Suite very comfortable for my buddy and I. I had a recipe for Pina Colada Cheesecake Cupcakes so made up a batch. I had to cut things in half because of the ‘grocery list oops’ but it is a good plan to try a partial recipe anyway, in case they turn out like my last creation. These are keto cupcakes and involve Bill’s favourite fruit, pineapple. I think he’ll like them.

Clemson and I took a walk down the lane at 3 this afternoon and picked up the local flyers. He sure is rambunctious when he wants to be, running in spurts up the lane. My heart swells each time he gets ahead of me and stops to see where I’m going before he moves again. I guess Bill is right. He’s Mama’s boy. That’s not a good example though, because he does the same thing with his Dad.  No sooner did we get back inside and the rain started again. Nothing heavy but it was spitting.

I cleaned up the dishes from my baking and sat with Clemson until his suppertime. Then of course he has to go out, really quickly. The good thing though when it is raining, he wastes no time and he’s back ready to come in. Just after 5, I coated the 2 chicken thighs that had been thawed and in the fridge. It was a recipe specific to convection ovens so I felt quite confident it would turn out. It would take 60 minutes according to the recipe but I should have set it for 50 minutes since there weren’t bones in the thighs.

I boiled a cob of corn and had some tomatoes and black olives on the side. The thighs were small and I had no problem eating both of them. My goodness, what a piggy! They were pretty much perfect. It was a good supper and I even had room for dessert so cut up a banana with cream and filled that last empty hole. Bill texted at 6:30 that he was leaving London which was better than I thought. Now I knew when to expect him, allotting for time to stop for supper at A & W in Dorchester.

The CTV news showed me what to expect for weather and Julie talked about a cool down for tomorrow. I opened windows and was sure we wouldn’t be hearing the a/c kick in anymore tonight. This is a lot of writing for a pretty quiet day but I guess I was on a roll. 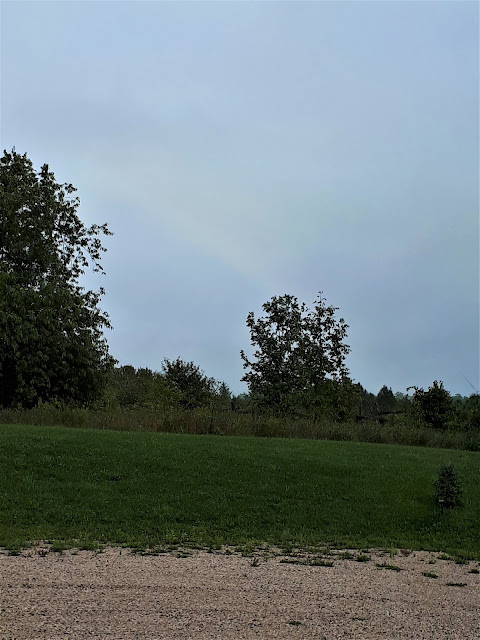 With dishes cleaned up, I finished this post and sat with Clemson and my book. This one is called One Shot by Lee Child. It will be another slam dunk, I can tell. I'm sure I called the last book Evidence but it was The Enemy. Another silly thing with the Kobo. This series of books are all under one title, so once I'm finished, I can't go back easily.


Thanks for stopping in today. I hope you got some of the clear skies that I did. I’d love to hear from you.

Posted by Patsy Irene (Chillin' with Patsy) at 6:09 PM