It was 6:30 when I got up on Wednesday, Aug. 15th. A couple of times through the night, I’d woken up and checked that Clemson was still beside me. With large pillows along Bill’s side of the bed, I was pretty sure he wouldn’t try jumping down without my noticing anyway. So, since he was still sleeping I texted Bill that I was up and when he called me, we chatted for a few minutes. He has one more orientation this morning (hopefully done by noon) and he’ll be on his way home.


I couldn’t go for a walk until after Clemson got up and went out for a piddle so I sat and read blogs until about 7:45. Poor baby, I woke him up and carried him outside. But I’m still sleepy, Mom! He wandered around inside and actually ate some of the hard food that I’d put in his dish! I’m so happy! I offered him a piece of cheddar with his last ½ pill in it and he ate that too. Good job!

By that time, I had another plan and that was to finish cutting the grass. Since Clem was happy up on the couch, I headed outside. The grass was still a bit dewy in places so I had to move slower in the long areas but I got it done by 9. So much for my early walk. When I went back inside, Clemson was still sleeping so I made a coffee, grabbed my laptop and camera and went out to the patio to sit. My plan was to use the ‘free’ neighbourhood Wi-Fi if possible. Why not?

Clemson stirred and wanted to join me so he is sitting here beside me on his stool, with my shirt. I plugged the battery in for the mower again, I think the long, wet grass burned it out quicker than usual. That’s okay, I was done cutting for the day. I was able to connect to Explorenet with a pretty fair signal so did a bit of Googling on Facebook and the internet for recipes. I found a good Keto spaghetti/pizza sauce that I’m going to make.

The a/c is still on but there is a nice breeze so I bumped it up to 77F/24C and opened windows. They are calling for 84F/28C so it would be silly to shut it off. As it turned out, the breeze was so unreliable, up and down, that within half hour, the inside temp had risen 5 degrees. I closed windows and bumped it back down. Gosh, just make up your mind, Patsy!

It was a pleasant morning though, now that I’d cooled down from grass cutting and I decided to read a little bit in the sun. This afternoon would prove to be too hot but right now my lounge chair is calling and so is my book. I chatted with Bill for a bit in the middle of his morning job, there is usually some waiting time to complete the whole process. He’s hoping for a 2 pm departure but that is pure speculation on his part.
After 45 minutes outside in the sun and partial shade, I came inside and made myself some breakfast, er, lunch. It was 12 noon. I scrambled up a couple of eggs, made a tea, toasted a piece of rye bread and cut up two cherry tomatoes. Yummy. I was hungry and that was good! 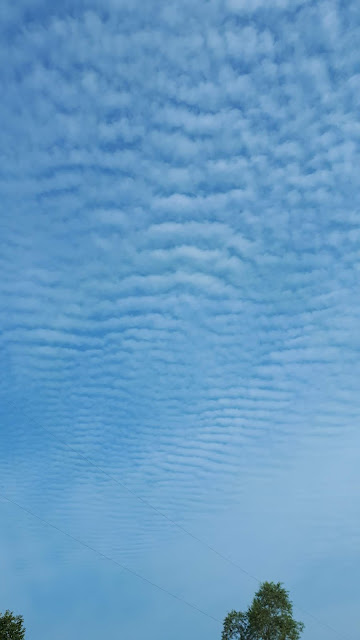 I’ve also started to make some mayo and the first two ingredients are sitting in the blender for the allotted 20 minutes. I blended and added the olive oil and other ingredients. Then the taste test. Hmmm, there is an overpowering taste, maybe olive oil? I bottled it up and put it in the fridge. I’ll have to try it on a toasted tomato sandwich and see how it tastes that way.

My hair needs attention again, not cutting but the old lady hair keeps wanting to take over. I’m not ready to concede, so after dishes, I looked after my roots. I debated hopping in the shower to rinse but instead used the large kitchen sink. I was pleased with the results again and went outside with Clemson to let the air blow it dry. I never use the hair dryer, well, seldom.

I spent some time in the recliner with Clemson ‘stuck like glue’ and read some of my book. In my head I had supper planned since I knew Bill would be home to eat with me. In the meantime, I responded to my questioning child by feeding him half of a Cesar pack at 3. He seemed to eat it up without any hesitation.
Since it was so early, I didn’t believe that he wouldn’t want more later. He seems to be feeling better as he is back to his old tricks.

I took him outside again and with his leash, we walked down to get the mail. When I looked down North Line towards the west, it was an unwelcome sight in the middle of the road. I wanted to see if it was what I thought and sure enough, either Mama or Papa Goose had been hit by a motorist. Aaah, that’s so sad. It must have been at night, that would be the only excuse for someone not seeing and slowing down for it.

I opened the bedroom door to see if Clemson would try going up the stairs but all he wanted to do was look for now. I left it open. As I was fixing his second half of supper at 5, Bill opened the door. I didn’t even hear him pull up. I can tell when I see him, that the drive is tiring. He unloaded the car but not much this time, just his suitcase and the cooler. No Costco shopping was necessary, we’ll be in London next week.

Marilynne called soon after he got home to let us know her move from Stratford to Fort Erie went okay on the weekend and to give us her contact info. We’ll make a point to go see her before heading south.

He sat and rested for a short while and I lit the Weber and grilled our sausage. I’d par-cooked a potato in the microwave, as a change of side dish and wrapped them in foil. There was just enough caesar salad to share as well so we cleaned that up. When we finished dishes, I worked on my post and Bill relaxed in front of the tv. Clemson curled up on the couch, finally.

All signs of wind have diminished and the temperature is still sitting around 78F. The a/c has kept it comfortable inside and I’m thinking maybe tomorrow we can turn it off. The forecast sounds a bit cooler. This has been a good day, I got the rest of the grass cut and had plenty of relaxing time. Clemson is showing still more improvements, going down the outside steps on his own most times and eating his meals again. Bill made it home safely too. Life is good.

I hope yours has been a great day too. Thank you for checking in!